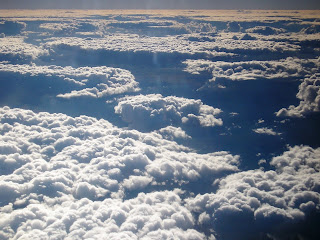 Last Friday was a little different.
We were supposed to depart Roma for Cunnamulla at 7am but when we arrived at the airport, we were met by Eddie, our unflappable pilot, looking a little more agitated than usual.
"Give me your mobile number"  he said, "and I'll phone you when we can leave".
The reason for the delay was obvious - a pea souper of a fog. Now, in Toowoomba, this would not have been remarkable. But in Roma - it was unheard of. I've been travelling out this way for five years, and had never seen fog before. 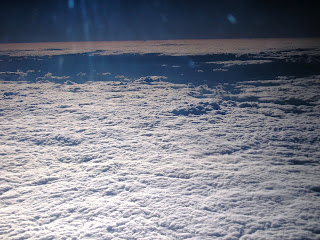 The weather gods were obviously high on some illegal substance, as the day before there had been tornadoes at Lennox Head.
To add to Eddie's hassles, only half the strip at Cunnamulla (our destination) was available, as it was being resurfaced. This meant that we could not carry the required maximum amount of extra fuel for a diversion en route, so we couldn't leave the ground until all fog cleared.
I went back to my motel and ordered a hot breakfast. Because our original schedule was too early for the motel to cook one in time, I'd taken the option of securing a continental version the evening before.  So the day didn't start all that badly. There are worse things than two breakfasts. 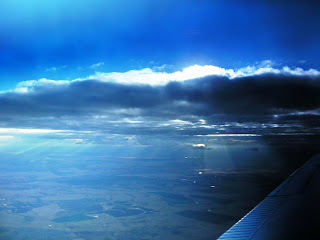 We got airborne at 10am, three hours late - "we" being the flying surgeon, myself and another advisory teacher, and a Speech Language Pathologist and her prac student. Two things about this student were interesting. One, he was male - the other was that he was Singaporean Chinese studying at U of Q.
Males in the Allied Health professions are like hen's teeth, and I guess there aren't too many Singaporeans visiting Cunnamulla. This bloke had never been outside of Brisbane, so he was a bit gobsmacked by the country he was flying over.
He kept saying in an amazed tone of voice "There is nothing....." 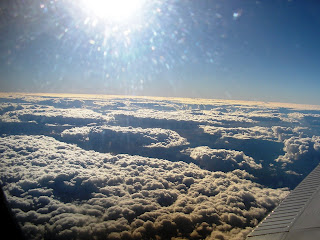 I guess someone accustomed to living in one of the most densely populated places on the planet was bound to be a bit surprised by the lack of crowds West of the Maranoa. I discovered we had something in common. He had done his compulsory military service in Singapore in Infantry, although he had no idea what I meant when I used the term "baggy-arse". He had achieved some rank (NCO of some kind) - more than I did.
Cunnamulla wasn't foggy, and it was generally a pleasant day. I always get plenty of exercise on these trips, as without a car, I have to walk between the two schools in town, and unless I want to eat lunch at the hospital (not recommended - although they're very hospitable) I have also to walk into town to eat. There's no tuckshop at either school. 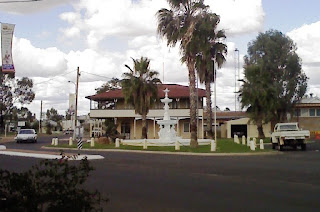 On the flight back, this student told me that he wanted to get a job working for an NGO in a third world country. I hope he's successful - his attitude and enthusiasm for his profession was admirable.
Posted are some interesting cloudscapes taken from the Beechcraft Kingair 200C on the return flight, a shot of downtown Cunnamulla, and a pic of the plane on the ground in Roma (that's the intrepid flying surgeon standing at the port wingtip). Click on the pics to see them true size. 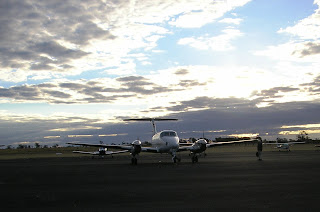