I'm posting this because I reckon it's worth attending, especially for Vietnam veterans.
I know a few lurk here.
From the promo -
This concert was created by some of Australia’s leading composers and will be performed by Little Pattie, Normie Rowe, John Schumann, the RMC Duntroon Band, Canberra Symphony Orchestra and choirs. It will take audiences on a musical journey, with 12 popular songs from the era and orchestral movements that will respond to stories or events that shaped our perceptions or experiences.

In honouring service and acknowledging pain, dislocation and the terrible cost of war, the Vietnam Requiem will be performed as a gift to our veterans.

It may also help in the process of reconciliation. 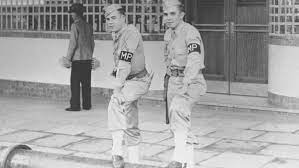 Pic courtesy Wikipedia
The picture above is relevant in terms of the ongoing debate about policing across the Pacific.
It was taken in Brisbane in early 1942 about the time of the Battle of Brisbane which resulted from tensions between Americans and Australians in general, and American MPs and Australian soldiers in particular.
The swaggering pose, and the behaviour that went with it, is what irritated military Australians, particularly those who were stationed in Brisbane at the time.
Now I'm no expert on the US, but I did spend some time there a few years ago, and what made a lasting impression was the contrast between Australian and American policing.
First up, there were so many different police forces on the streets of both Washington and New York, where I spent the bulk of my time. No doubt the big cities aren't representative of the whole country, but it's fair to compare what is obvious on the streets of say Sydney and Brisbane with what observable in New York. The first impression is of the noise they make. Sirens are everywhere, and each police force seems to have its own dedicated siren tone.
It was not unusual to see two or three different police squads, from different jurisdictions, on one street block. This is unsurprising when you understand that there are over 500 different law enforcement agencies in that state.
They also wear different uniforms, although all are militaristic in appearance.
But what is immediately obvious to a visiting Australian is the swagger and intimidation generated by their presence. They appear to intentionally promote an image of power and force which is unique to the metropolitan USA.
I have no doubt that this swagger and intimidation is what got under the skin of Diggers in 1942. It hasn't changed and is obviously cultural.
It is easy to understand the current controversy when you compare. Our coppers can be arrogant and intimidatory, but I have seen little of that, even though sidearms, uniforms, and demeanour have changed enormously here in my lifetime.
I guess if you are plod in the USA, and you know that every punter could be carrying a concealed firearm, you'd be toey.
The Americans, with their insane gun laws, have made their bed, and I guess they'll have to sleep in it.
Let's hope we maintain the NFA.
Comments closed.
at April 27, 2021 13 comments: