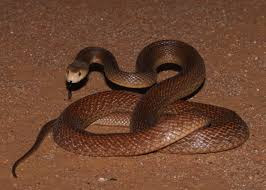 Taipans (Oxyuranus scutellatus) had a fearsome reputation when I was growing up in North Queensland.

I had a close encounter with one on our school's pineapple project garden when I about eight. I was weeding pineapple plants with a hoe, and blundered across a large and healthy specimen curled up against the row.

I'm not sure who got the biggest fright, the taipan or me, but it uncurled itself in a flash and began to chase me along the row. They move very quickly.

I threw the hoe at it which distracted it somewhat, and took giant steps, not looking back until the pineapple patch was more than 100 metres behind. I reckon I was hovering most of the way.

The snake had disappeared by the time my father, responding to my pale face and eyes like saucers, turned up with his dilapidated shotgun.

The only time we ever saw the shotgun was when snakes were about, but there are still holes in the roof of the school toilet where dad dispatched a snake with it in the 50s. I know this because I went back to the school years ago, and found them - the holes, not the snakes.

This was sugar cane country, and there were snakes of all kinds in the area.

We used to get regular visits from a snake expert called Ram Chandra, an Indian chap who made a reasonable living out of touring schools with boxes of snakes and giving informative talks about reptiles. He was one of a group of pioneers who helped develop an antivenene.

Years later, when I was teaching kids with disabilities in Townsville, we were taking a group of these children on a bush walk in coastal scrub not far from the CBD. One of the boys, a lad with Down Syndrome kept lagging behind, and I had, on a few occasions, to leave the main group and check to see if he was OK.

Towards the end of the hike, when everyone was getting a bit tired, he was behind again, so I called his name. His response as I heard it, was "Taipan, taipan!".

I ran back at about the same pace I had used when chased by a taipan as a kid, frantically trying to recall the first aid techniques for managing snakebite that I'd learnt to keep my St John's certificate current.

When I reached him, he was sitting on the track, looking a bit flustered, but showing no symptoms of snakebite.

It turned out that what he was actually saying was "Tight pants", not 'taipan".

The pants were what was slowing him down.

In hindsight, it's funny, but at the time I was far from amused...

Is "snake" a nickname for for soldiers who wrangle their way back to Q store safety while their mates fight it out in the jungle?
John Grey

We called sergeants "snakes" in my time in the army.
The word "wrangle" used as a verb, means "to have a long, complicated dispute or argument".
Buy a dictionary.

John Grey
What is your problem with 1735099?
I served with him and he was a good soldier.
You sound like a sicko.
Ex-digger

"I served with him and he was a good soldier."
I respect your opinion, ex-digger.
I assume you served with the blogger while he was engaging with the enemy, not after he wrangled his way out of the front line and got himself to the safety of the Q store.

I also assume he hasn't elaborated on his inconsistencies (i.e. the bullshit I enjoy calling out)
The most obvious example is his claim that "As a student in the sixties [he] had been sympathetic to the cause of the anti-war movement" yet he did absolutely nothing to stop being conscripted.
No CMF. No conscientious objector status.
All he has done is to complain about the war, conscription, conservative politicians, and President Trump. His bitterness probably stems from realising he did the wrong thing 50 years ago and not having the courage of his convictions.

I ask you, ex-digger, why would a good soldier wrangle his way out of the front line just when his experience would be useful to the next group of newly-arrived conscripts? He got the benefit of others' knowledge yet he deliberately withheld his knowledge from conscripted Aussies.
John Grey.

"The word "wrangle" used as a verb, means "to have a long, complicated dispute or argument"."
So that's what you have been doing for the last 50 years - wrangling.
John Grey.

I ask you, ex-digger, why would a good soldier wrangle his way out of the front line just when his experience would be useful to the next group of newly-arrived conscripts?
The army made decisions - we obeyed orders.
You don't have a clue. There was a consistent turnover of Nashos through the tour.
The platoon I was in had only five of the originals on RTA.
You have no idea what went on back then and are making a fool of yourself.
Perhaps that's why 1735099 allows you to comment.
I wouldn't.
Ex-digger

Ex-digger, can you enlighten us with some real information about the head master, or are you running interference from loyalty to a fellow digger from Seven? Was the reason he served some time sorting equipment the fact that he was an unbearable whinger and bad for morale when out in the boonies?
I am not John Grey.

I can never remember him whinging about anything. I can recall him getting up the ribs of an NCO when he mistreated some kids.
He was usually pretty quiet, but never had a bad word to say about anybody. As I said before - a good soldier.
You weren't there, and don't know what you're talking about. And as I said before, you're a sicko.
Ex-digger

Thanks mate - but unnecessary.
This person is obsessed with the rubbish that gets posted on Catallaxy, which daily invents its own version of reality.
It's always good for a laugh.

"This person is obsessed with the rubbish that gets posted on Catallaxy"
The only obsession in evidence is the avalanche of crazy posts that the blogger himself invents to put on the Catallaxy site.
Oh and by the way - the blogger doesn't ALLOW me to post here. He censors everything and deletes some.
John Grey.

John Grey, for someone not ALLOWED to post, you have a lot to say.
You're sick.
Ex-digger

"The army made decisions - we obeyed orders."
I would have assumed so too, but it runs counter to the blogger's narrative.
He claims to have deliberately made his superiors' lives miserable so that they would remove him from the front line and put him in a position of administration and safety.
He brags about being successful in achieving that aim.
That stands in complete contrast to people like ex digger who served, fought, and on return to Australia lived their lives with honour.
John Grey.

"John Grey, for someone not ALLOWED to post, you have a lot to say.
You're sick."
and "You have no idea what went on back then and are making a fool of yourself."
In the interests of partial disclosure, I'll let you know I was not balloted into National Service. My birthdate was not drawn.
So you are correct - I don't know first hand what went on back then.
But I can read, and reading the blogger's accounts of his service reveals a lot of inconsistencies.

All I am doing here is revealing those inconsistencies.
John Grey.

"This person is obsessed with the rubbish that gets posted on Catallaxy"
I do lurk on the Catallaxy pages, for the excellent ideas debated there.
I guarantee the quantity of my posts here are far fewer than the blogger's comments at The Cat.
As I said earlier, the only obsession in evidence is the blogger's desire to stir the pot at The Cat, which is caused by his obsession with promoting left wing causes including communism.

This blog of his is only a secondary motivation for him.
John Grey.

John Grey, if you were not ballotted into NS and dislike communism, why didn't you volunteer? You sound like a hypocrite.
Ex-digger

Ex-digger, you have your anonymous's confused. I signed off with I am not John Grey to let you know. Neither am I a sicko, I was there and therefore do know what I am talking about. I didn't say much merely asked for information. Please try to remain polite. PTSD is not an excuse for being rude and making false assertions, although I do understand if you have anger management difficulties.
I am not John Grey.

"You sound like a hypocrite."
Supporting my government's decisions on using the Army and additional conscripts to fight communism in Vietnam is not hypocricy.

Hypocricy is the blogger using the slur "Septic tanks" to describe Americans yet expecting them to buy his book.

Supporting my government's decisions on using the Army and additional conscripts to fight communism in Vietnam is not hypocricy.(sic)
Then all the twenty-year olds who had to be conscripted into the army at the time to fight it, must have been hypocrites. If Communism was the existential threat that it was made out to be, they would have been queuing up to join.
My deferment was to finish my college course and teach for a year. Trump's non-existent heel spurs (which heel?) got him out of service completely.
By the way, the Yanks love my book. I met with a number of Vietnam vets in New York and washington in 2018, and most have them have exactly the same attitude to the war as I have.
And it's "hypocrisy".
Avoid using words you can't spell nor understand.

Mission accomplished.
1. The blogger is no longer using the slur 'Septic tanks" to describe his American customers.
2. He has acknowledged the great similarities he shares with President Trump - both were deferred from service in Vietnam.
3. Whilst attempting to engage with me over a minor grammatical mistake, the blogger spells washington without a capital W.

You couldn't make this up if you tried.
John Grey (you know, the Liberal PM who started the Australian withdrawal from Vietnam)

Septic Tank is Cockney rhyming slang.
I will continue to use it.
The decision to leave Vietnam was made not by Gorton, but by the Americans.
We followed them on the way in, and on the way out.
Gorton was just a cypher.

"Septic Tank is Cockney rhyming slang.
I will continue to use it."
Of course. It's free country.
However, be advised that 'septic tank" is at the very least considered sarcastic but usually considered derogatory.
I'm sure your use of it while meeting US vets went down well. (sarcasm).
I'll bet you didn't use it to their face.
John Grey.

The blogger's tactic of releasing a distraction squirrel doesn't obscure the truth.
Both he and Donald Trump sought, and were granted, deferments from service in Vietnam.
PS - any apology yet for mis-spelling Washington?
John Grey.

Do tell - what unit did Donald Trump serve in?
Ex-digger

It’s at the very least considered sarcastic
Not in my experience when I used it with Vietnam vets in the US.
They thought it was hilarious, and attempted, not very successfully, to make up examples of their own.
As well as lacking a sense of humour, you take them more seriously than they take themselves.