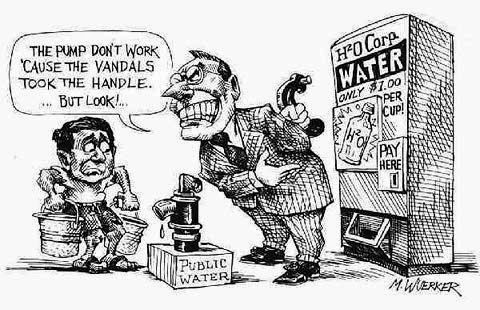 In the course of my work I average 60 overnight motel stays annually. This means 60 bookings to be made. I usually make them a term at a time.

It used to be a simple process. Step one was phoning the motels, and making the bookings myself. Strictly speaking, this is unnecessary, as my agency will make them for me, but I’ve learned through bitter experience that the mining companies bulk book the motels well ahead, so I do it early and all at once so I don’t have to sleep in my swag.

The next step was to fill out a form and email it to my local office, whereupon the booking would be processed, and an authorisation to charge the agency sent to the motel. Because I follow a fairly regular circuit and use the same motels all the time, generally all I had to do was cut and paste the new dates.

It was a quick and trouble free exercise, and took less than an hour’s work for the whole term.

Now that we have an LNP government, whose ideological mantra is to shut down anything the public sector does that can be done by a private concern, that has all changed. This task has been contracted out.

The very efficient woman in the district office who used to do the bookings has had her hours cut to the bone. In some of the smaller offices in the more remote districts, the people who do used to do this work as part of their duties have been sacked.

The bookings are now made by a Sydney based agency. I’m not sure who owns it, but in my conversations with them, I’ve yet to encounter anyone who doesn’t have an Indian accent.

Under this new dispensation, I have to make a booking on-line on a clunky website that is very difficult to navigate. Of the four of us at my base, I’m the only one who has so far mastered it to the point of actually successfully making a booking. The new system was set up in November last year, so we must be slow learners.

To give you an example of the clunkiness. To select the particular location you use a drop-down dialogue box listing every destination on the website. These destinations are not limited to Queensland, but include the whole of Australia. This means that there are over a thousand options on the drop down list. It’s not intuitive – you can’t type in the location. Stiff luck if your destination has a name beginning with a letter somewhere in the middle of the alphabet – no matter which end you start at, you need patience and a cut lunch to find it.

Many of the places I stay are well off the beaten track, and the locations simply aren’t listed. When this happens, you have to phone a 1300 number and twiddle your thumbs whilst you wait in the queue for the agency to do the booking manually. Meanwhile, precious time that could be spent in doing the actual work I’m paid for ticks away.

Now even if you’ve got it all to work, you get your confirmation email, and you head to your destination in the sure and certain knowledge that you have a bed for the night, you could be in for a big surprise. Or at least I was last week when I discovered that the motel I thought they’d booked for me had no record of my booking.

Now they had one room available, and I am a regular, so I had somewhere to sleep.  I was lucky. The motelier and I had a three way conversation on the 1300 number with a "Consultant". The conversation was laced with apologies from the polite Indian chappie at the other end, but he was not amused when I pointed out that his agency’s stuffup could have resulted in me sleeping in the car.

This situation led to the motelier giving me her opinion of the new system. She hates it. First up, they cream a $15 commission off every booking. This cuts pretty deeply into the small business’ margin, but she has no option but to deal with them, as all state agencies must use them. All she can do is put up the room rate, which in turn will increase the cost to the taxpayer. She also pointed out that they are unreliable, and my phantom booking was not the first.

So where does that leave us?

The privatised system has resulted in the following –

1. Less profitability for local small business.
2. Higher cost to the agency (and therefore the taxpayer) using the system.
3. Time wasted by the itinerants whose time is limited and precious.
4. Job losses in regional communities.

Sydney is a long way from South Western Queensland, but that’s where the Queensland taxpayers dollars are going.

But it obviously pays some people well. A little research on the company reveals the Managing Director has enough dosh to own a villa on Bali. At least the organisation appears to be Australian based.

I’ll think about that villa on Bali next time I’m left on the side of the road in the interests of greater efficiency on the part of private industry.