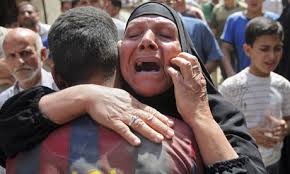 These two news stories are noteworthy when put together.

The first (from the UK’s Telegraph), reports on commentary from the US (predominantly the US Right) accusing Obama of “weakness” in the face of the use of chemical weapons in Syria.

The second (from the BBC) reports a spate of bombings which has killed 5000 in Iraq so far this year.

It seems that any action, short of military invasion, and the habitual use of firepower is defined by the Republican rump as “weakness”.

If avoiding military intervention is defined as “weakness”, it might be worth considering the results of “strength” as applied to the invasion of Iraq in 2003.

Where is Iraq now?

Is it the bastion of democracy, the haven of peace that was held out by the supporters of Operation Iraqi Freedom?

Iraqis are killing each other at a rate unparalleled since the height of the insurrection that followed the Coalition of the Willing’s attempt to rescue them from tyranny. Sounds a bit like Syria, doesn’t it?

Perhaps that 2003 intervention was well-intentioned, but we remember the cliché about the path to hell being paved with good intentions, and hell is what has been delivered by that same intervention.

And then there’s the small matter of over 4000 US casualties, and thousands more maimed and traumatised for life, and over 100000 dead Iraqis.

So in the parallel universe occupied by the US Right, testosterone and posturing trump caution and diplomacy. But then, the Yanks rarely learn anything from history (Vietnam, Iraq, Afghanistan).

I believe this mindset is called “American exceptionalism”.

Exceptional stupidity is a more accurate description.
Posted by 1735099 at 07:16

I tend to agree