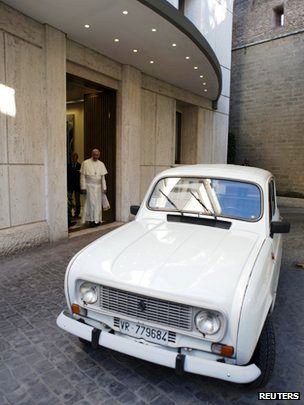 Pope Francis has been given a Renault R4 by an Italian priest.

Apparently, Francis used one of these things when he lived in Argentina. They're quite popular there.The R4 itself is much-maligned.

Despite their resemblance to a tin can on wheels, they are a robust and versatile vehicle. Back in the day, I had a fondness for Renaults, having owned  three R12s, and an R16 over the years.

The R16 never ran, being a failed restoration project, but that's another story. The R12s were great.

I drove a mate's R16 on a journey from Darwin to Brisbane, and they're a very impressive piece of kit. The only contemporary vehicle that covered long distances over poor roads better was the Peugeot 404. I owned two of those.

Back to the R4, one of which I drove in the seventies. Once you got used to the gearchange which resembled a pump handle protruding from the dashboard, it was a surprisingly comfortable drive.

If Francis fancies R4s, he's likely to be a breath of fresh air in the papacy.