Rock Crushers and the NDIS 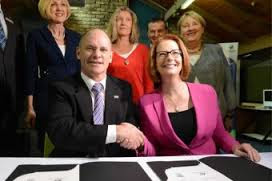 This is the Catholic Leader's read on the NDIS.

They've got it right.

"Whatever view individuals may take on the Federal Government's decision to part-fund the scheme through a public tax, we must not forget the very important fact that the NDIS - once implemented - will be life-changing for those living with a disability ...," he said.

"He" is  Executive Director of Centacare Australia, Peter Selwood.

"While understandable that many people are reluctant to pay what they see as 'yet another' government tax hike, the resulting impact this could have on the life of someone living with a disability makes it seem a relatively small price to pay."

The LNP government in Queensland signed up at the end of last week.

This initiative is the most significant development I've seen in this field since I started working in it in 1971.