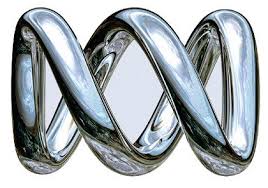 If you read enough shock jock blogs and opinion pieces, you’ll become familiar with the incessant whinging that the ABC exhibits bias in its reporting.

I decided to try a basic and simple fact checking approach to see where the truth lies.

(I hope you noticed that clever juxtaposition of words and meaning – truth lies…..
You didn’t – never mind).

The Australian comes to me daily on-line. I haven’t actually shelled out any money on this version, and never would, but it’s interesting to get Rupert’s daily spin.

The ABC, of course, is always available on line.

What could be simpler then comparing daily news stories for a week against a simple measure of bias? To do this, I took a screen shot of the leading stories and classified them as positive to the existing government, neutral, and hostile.

On this post you’ll see the daily stories and my judgement. See what you think…. 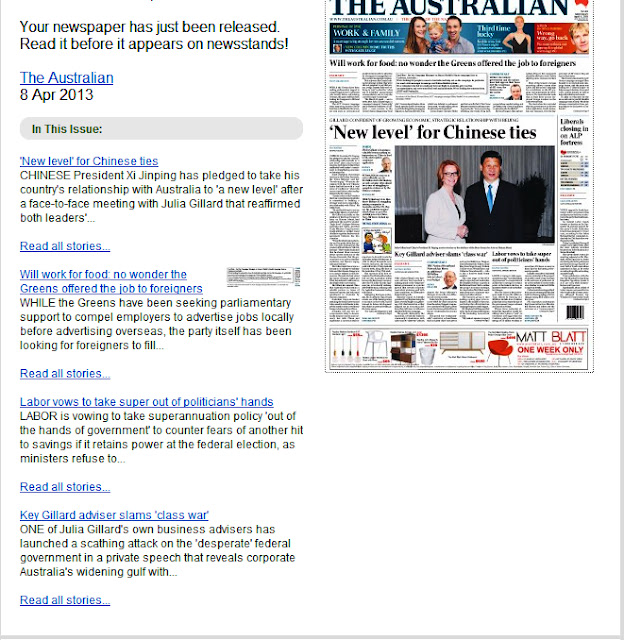 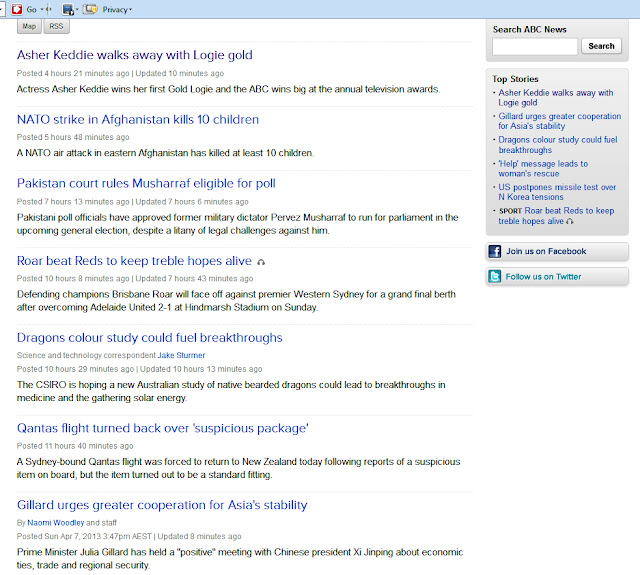 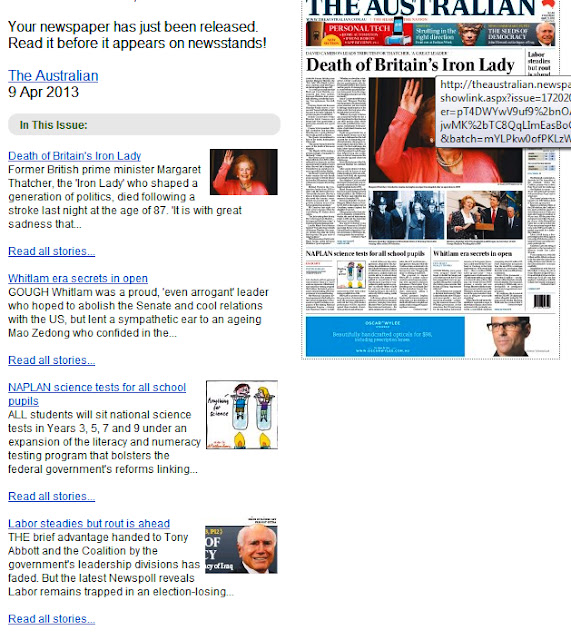 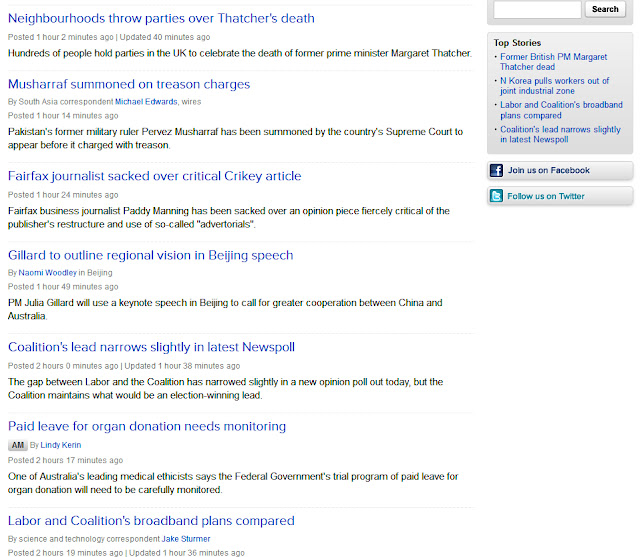 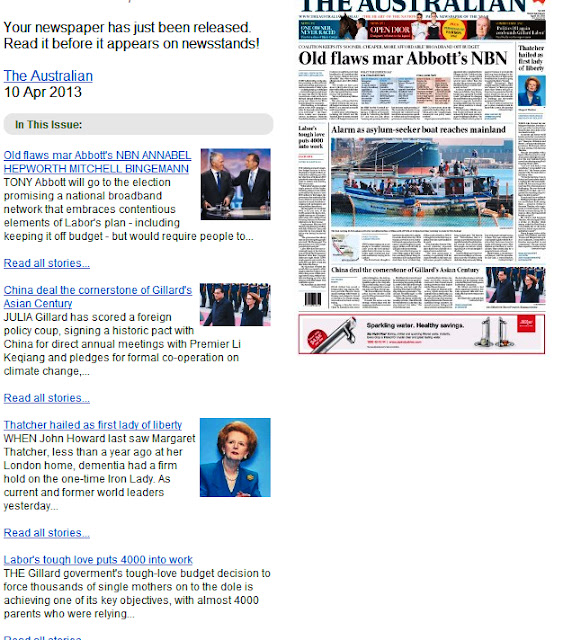 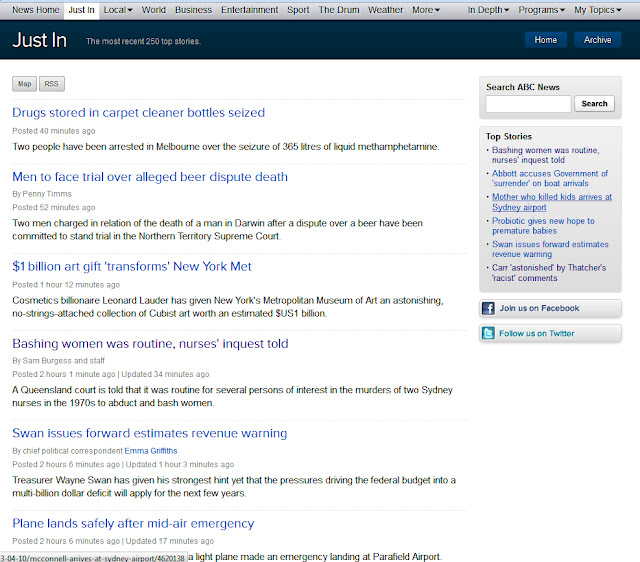 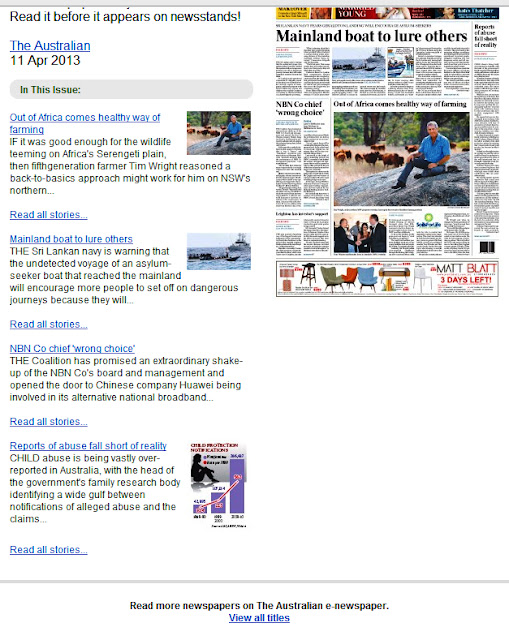 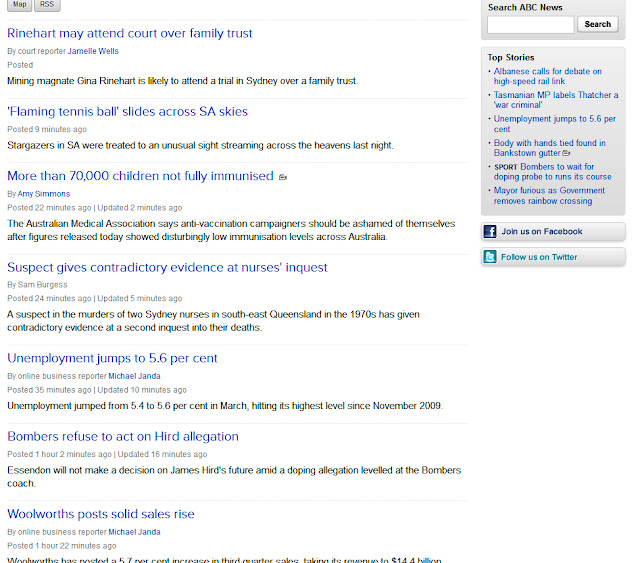 That’s not a whole week, but it’s sufficient to be indicative.

The baseline numbers of stories differ, so I’ll convert these scores to percentages rounded to whole numbers -

These figures speak for themselves. You can check my classification of stories – that’s why I’ve posted the screen shot.

The reality – The ABC is generally fair. The Oz is biased against the current government. Don't believe it? Review the screen grabs.

Latest Nielson poll indicates that the current Govt. (Labor) has 29% positive, 49% negative and 22% neutral standing in first preferences or popularity depending on how you look at the numbers. So what's your point....editors/producers have a differing opinion on what is important to consumers? Perhaps it has something to do with who pays the bills and voting preferences of personnel at the different media sources. Pointing out the flaws does nought to ameliorate the problem.

NOT FOR PUBLICATION!!!!!
Query.....Being a B company member, did you know John "Jacko" Flynn? Couldn't find him in the Vale section of Porky and thought if you knew him you may like to know he passed away of cancer a couple of years back, as so many of us do.

My only point is to bust a myth or two about ABC bias.

Didn't know if you'd seen this. Just another point of view.

With Labor's current standing in the electorate and most of the news to be reported is kind of negative about their performance, an onside media outlet (ABC) could not report positively about the performance without losing credibility. With an obligation to report said performance and not wishing to take the negative side, the middle ground is the safe haven (neutrality). If Labor ever get anything right again watch the percentages change.

What a moronic analysis! Comparing the Australian (a serious newspaper) to ABC.net.au If you want a real compare, compare news.com.au and ABC.net.au If you want to compare anything to the Oz from the ABC, compare ABC the drum. Serious News corp journalism, vs serious ABC journalism. Oh yeah, if you want to really know what's going on at the Oz, pay for a subscription you dimwit. The fact that you don't pay for it means you are missing out on what is really being written in the Oz.You have proved nothing here except your an idiot.

If I was silly enough to pay a subscription to the Oz, I would indeed be a dimwit.
It runs at a loss.