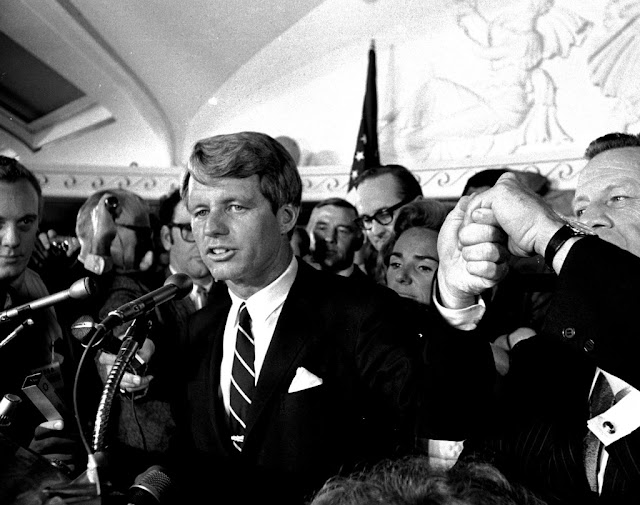 Today is the 50th anniversary of Bobby Kennedy's assasination.

I remember it well, because it happened on my 21st birthday. At the time I was in my first year of teaching at Goondiwindi State School, with my year 5 class of 44 students.

My teaching colleagues had taken me to one of the local pubs and shouted me many beers. In those days, drinking in pubs was not allowed until age 21, so these were my first legal drinks.

The news of the assasination came as I was dealing with my first real hangover. It shocked me into alert sobriety immediately, and also into deep sadness.

Bobby Kennedy was for me, a symbol of hope and optimism. I knew enough about US politics at the time, to harbour the hope that if Kennedy got into the White House, maybe my impending national service would not eventuate.

I had already been called up in my second year at Kedron Park Teachers' College. As a teacher in training at the time, I had been deferred to allow the completion of one year of teaching. I had plenty of time to contemplate American politics and how they were likely to effect my future. The letter from the Department of Labour and National Service said I had a "liability to serve", wording that I found completely bizarre. Looking back on it, they were pretty bizarre times.

Kennedy had just won the Californian primary, and was gathering momentum over the establishment Democrat nominee, Hubert Humphrey. Nixon went on the win the election in 1968 after Humphrey became the Democrat nominee when the Chicago convention imploded..

Jack Newfield, writing in Robert Kennedy : A Memoir. (1969) believed RFK had the potential to create a different future -

And maybe 200 Australian Nashos wouldn't have died in Vietnam.

With Kennedy, died the hope and optimism of a generation of Americans and the future of many young Australians.

Compare the grace, dignity and compassion of  Bobby Kennedy with the behaviour of the current incumbent in the White House.