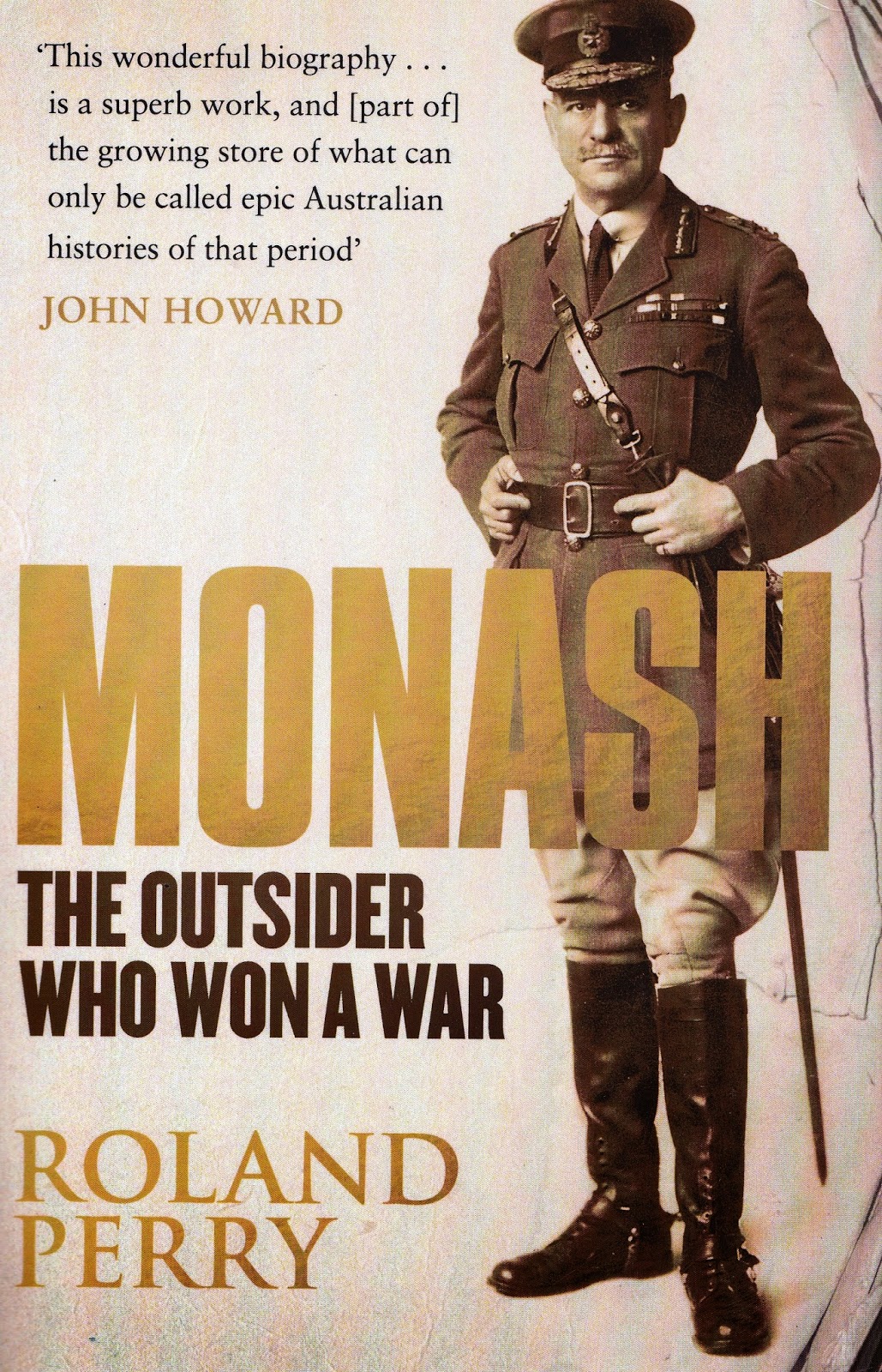 I finished reading this a few weeks ago, but left reviewing it until I'd had time to digest its content.

He follows Monash through his early life, chronicling the economic and societal world in which he grew and developed. This adds depth and substance to the biography, and makes it easier to understand Monash's later life.

Monash's German/Jewish origins are a building block to the narrative, but I suspect that the man himself dwelt much less on that than many of his contemporaries.  They became an issue from time to time, often when he was in competition with others for high military office, but Monash's genius usually made ethnicity irrelevant.

He was an outsider, not only because he didn't belong the the Anglo establishment, but also because he was not regular army. Both were barriers to ambition, but neither stopped him.

Strangely enough, whilst he is remembered as a soldier, he was probably an engineer before he was anything else. He applied engineering strategies to all his planning, and the outcome was positive for soldiers he commanded.

What made him a standout in his day was his attitude to casualties (he worked hard to avoid them), his pioneering work with joint operations, and his insistence on meticulous planning. He stood out like the proverbial compared to the Pukka British staff officers whose incompetence killed so many of their soldiers.

He was one of the first senior commanders who considered the feelings of his troops in the sense that he knew Australians were good soldiers because their motivations were different from those from the old country. They were fighting for each other, rather than for King and Country. In a circular distributed after the battle of Bullecourt, he expressed it thus - Fight for yourself, Australia, and the British Empire.

Perry infers that the priority was significant. Doing it for Australia meant more than British Empire maintenance. (p281)

Monash wrote bitterly after Passchendaele - Our men are being put into the hottest fighting and are being sacrificed in hare brained schemes, like Bullecourt and Passchendaele, and there is no one in the War Cabinet to lift a voice in protest. Australian interests are suffering badly. (p307)

His knighthood in the field served to subdue, if not silence his critics, one notably being Rupert Murdoch's father, Keith. Understanding Murdoch the elder's arrogant view that he was entitled to write government policy, rather than report it, provides an insight into the behaviour of his son.

I hate the business of war - the horror of it, the waste, the destruction, the inefficiency. My only consolation is my sense of doing my duty for my country, which has placed a great responsibility on me. I owe something to the men whose lives and honour are in my hand to do as I will. But once my duty is done and honourably discharged, I shall with a sigh of relief, turn my back once and for all on the possibility of ever again having to go through such an awful time. (p394)

He was a civilian in uniform, serving his country out of duty, not glory.

After the war, attempts were made to recruit Monash to the Fascist movements bubbling up in Australia at the time. Prime Minister Scullin sniffed the wind and invited him to travel to India for the first three months of 1931, to represent Australia at the inauguration the new capital of New Delhi.

As Perry writes - the conspirators sniffed a conspiracy.

What do you and your friends want me to do? To lead a movement to upset the Constitution, oust the jurisdiction of parliament, and usurp the Governmental power? If so, I have no ambition to embark on High Treason, which any such action would amount to.
What would you say if a similar proposal were made by the Communists and Socialists to seize political power for the benefit of the proletariat and the extinction of the bourgeoisie, as they have done in Russia? Would you not call that Revolution and Treason to the Crown and Constitution?
Depend upon it, the only hope for Australia is the ballot box, and an educated electorate. You and your people should get busy and form an organisation as efficient, as widespread, and as powerful as the Labour Party. (p509)

The references to his private life are handled gently and respectfully. I could imagine a temptation to exploit them, but it is avoided. Perry has honoured this most important of Australians.

I humbly suggest, dear reader, you do the same, by reading this book. It's available in paperback for about $40.