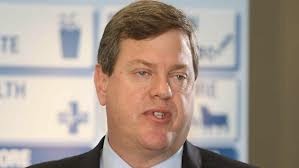 I posted this on March 30th.

Still no acknowledgement - probably a pretty fair indication of the Queensland's government's regard for ex-service personnel.

Given the fashion in which they reward themselves, their self-regard is on a different plane.

I refer to recent decisions regarding remuneration for Queensland parliamentarians.

These increases are backdated from July 2013.

As Treasurer, you are obviously content that the State’s finances are secure enough to provide this level of remuneration (the highest in the country for state members) into the foreseeable future, despite the findings of the Costello audit, and the proposed selling of state owned assets designed to pay off debt.

With this in mind, I respectfully ask you consider a different issue of remuneration relating to Queenslanders who, as public servants, were conscripted to fight in Vietnam.

Remuneration for soldiers was a great deal less than for civilian occupations and this was more than often the case for public servants. In my own case as a teacher, the shortfall, in today’s dollars is the amount of $27,550.59. This was despite an additional allowance paid to me on operational service in 7th Battalion, Royal Australian Regiment, in 1970.

I am therefore respectfully requesting a payment of $27, 550.59 as salary owed to me by the state of Queensland for years 1969 – 1970, when I was on compulsory military service. Obviously, similar amounts are owed to all other Queensland public servants who were conscripted.

Given that the state can afford to pay its parliamentarians salaries of the magnitude identified above, there should be no problem finding these relatively small one-off payments to a declining and finite group of returned Queensland service personnel.
My invoice is attached.

Gee I should pinch that and give it a burl. Maybe you should write to Tony, after all it is a federal issue.

Unless the feds were expected to reimburse the states, it was a state issue, Cav.