First they came for the bikies... 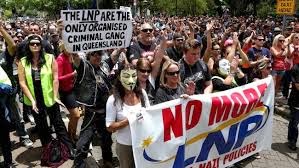 The picture above reminded me of an incident back in 2008 that I blogged about at the time.

In the context of the current politically generated hysteria about bikies, I though it was worth sharing again -


A few weekends ago, my wife and I traveled to a provincial centre some 80km away to participate in a “show and shine” with our car club.
It was a glorious day – or at least it started out that way – with an autumn sun providing gentle warmth, and no wind to speak of. The road was lightly trafficked; the countryside a picture, and once we left the main road, the drive engaging.
There was a wide variety of vehicles on display ranging from street rods to classic British sports cars. There were also lots of bikes, and of course, bikers.
Standing beside a cluster of Harleys was a leathery looking character wearing a Vietnam Veterans Motorcycle club jacket. He displayed some interesting tats, and wore the signature head scarf. He looked about my age, but wasn’t as grey as me, and looked as fit as a whippet.
Despite my wife’s “are you sure this is a good idea” look, I walked up to him, extended my hand and introduced myself as a fellow veteran.
“Nice bike”, was my observation. He shook my hand. It emerged that he’d been in Vietnam at the same time I was, but had served in 4 RAR. During all this time, he kept his left hand hidden behind his back.
As he relaxed and became more animated, his left hand, or what was left of it, emerged. There was no hand as such, but a well-worn leather gauntlet covering a stump.
“Got shot up in a bunker system”, was his explanation. “Copped it in the arse as well”.
We shared warries about bunkers. My story had a happier ending. I mentioned that I’d gone back to Vietnam a couple of times. He looked at me as if I had rocks in my head.
“I wouldn’t ever do that mate – it would bring back too much shit” was his dismissal. Fair enough.
“The whole bloody thing was completely stupid”, was his closing observation as we wished each other well and went our separate ways.
It rained on the way home, so we had to put the top up. I thought of him. You can’t put a roof on a Harley, but his leathers probably kept him warm and dry.
Posted by 1735099 at 08:15

During which dates do you think you and your bikey mate from 4rar were in the funny country at the same time? Battalion histories indicate that 7 and four did not serve in svn at the same time.

Don't know - don't care.
Maybe he was a Reo.
And this detail is completely irrelevant to the point of my post......

Then your reincarnated post statement was based on don't know don't care? If he was a reo into 4RAR and was there at the same time as you they waited a damn long time to transfer him given that you came home in 1970 and 4Rar didn't set up camp until half way through 1971....just goes to the veracity of your post in the first place.
If you dress like Charlie, use Charlie's equipment, aspire to be just like Charlie, get caught in the wrong place at the wrong time....then you are a target, if you know what I mean. Wannabe bikies are lucky they only have to confront coppers and answer a few questions. Charlie wasn't that lucky.

Charlie came out on top in the end.
Newman needs to think about that......

Yes, you can't indulge in a war that you are not prepared to win.