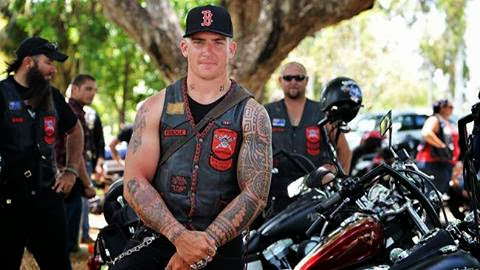 When it comes to living in Queensland these days, it says it all.

A young soldier has told of being strip-searched by police in front of his home as the Queensland Government's tough anti-bikie laws continue to take a toll on recreational riders.

1RAR soldier Private Noah Schefe, 22, who is a member of the Townsville chapter of the Patriots Motorcycle Club, was searched by police outside his home about three weeks ago, late at night, after he returned from the chapter's clubhouse.

He was not charged with any offences.

Patriots Australia is a military club for serving, former regular and reserve members of the Australian, Commonwealth and Allied Defence Forces.

It regularly participates in fundraising for charities, recently raising $4500 for Legacy Townsville.

The club publicly condemns all criminal activity, and is not included in the government's list of bikie gangs declared as criminal organisations.

Pte Schefe said the police officer who searched him was not aware of the club, nor had any interest when told about it, despite Pte Schefe showing the officer his Defence ID card.

``He got me up over to the cop car and put me up against the car and started pulling everything out of my pockets and taking my boots out,'' he said.

``The other cop had my bag on the bonnet and pulled everything out of my bag, searching the whole lot.

``They had me there for probably a good half an hour, at 1.30am, with all the lights on and everything.

``All my neighbours saw it - I'd just moved into this house about two weeks beforehand - they're sitting there thinking they've got a criminal bikie who's moved into the neighbourhood."

There are about 20 members of the Patriot's Townsville chapter, who based their constitution on the Defence Law Manual, following the rule of civilian law.

``To be treated like a criminal, for the same reason someone's shot somebody on the Gold coast, it's absolutely ridiculous."

Local Government Minister and Mundingburra MP David Crisafulli told motorcyclists gathered at a public rally at Anderson Park yesterday the new laws should not be making innocent people feel like they were being treated as criminals.

At least 100 motorcyclists attended the protest, alongside riders from across the state as a show of solidarity against the laws, aimed at criminal bikie gangs, that have resulted in the harassment of law-abiding people.

Mr Crisafulli told the crowd gathered at the rally the Government's laws were in place to target the one per cent of bikies carrying out criminal activities.

``The rules are there to protect the community and I don't think we should move away from that,'' he said.

``By the same token, the rules should not be there to make innocent people feel like criminals.

``Because you ride motorbikes, and have tattoos, it doesn't make you a bad person."

He said he was willing to speak to motorcycle riders about "getting the balance right" on the legislation.

Motorcycle Riders' Association Townsville spokeswoman Karina Ewer said the "one-per centers" were not the only ones being targeted by police.

``We've had a woman pulled over nine times because she rides a Harley,'' she said

``There are people here from all walks of life, and we have all been affected in some way, and we won't accept being classed as collateral damage."

She said the bikie laws were having a devastating effect upon clubs who conducted charity fundraisers.

``The MRA raises about $10,000 for Christmas every year through its toy run, every year,'' she said.

``We literally had people walking to the other side of the street to stay away from us, for the first time ever."

Last month the Australian Motorcycle Council (AMC) launched a fighting fund to raise money for any High Court challenge against the laws.
Posted by 1735099 at 10:50