A Factor of Ten 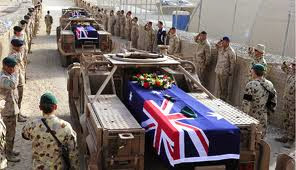 Today is Remembrance Day, and our thoughts turn to the winding down of the commitment of Australian troops in Afghanistan, the longest military conflict in our history.

In reflecting on that, two apparently unrelated images caught my eye.

One was a recent video grab of a C-17A landing at Tarin Kowt. On board were the next of kin of Diggers killed in Afghanistan. There was also an interview with a father. It was dignified, but there was a pervading sadness which characterised this man’s responses to the journalist's questions.

The other was a shot I took on a visit to Vietnam a few years ago.

I was with a group of Vietnam vets conducting a service in the Long Hai hills commemorating the loss of nine diggers from 8RAR in a mine incident in February 1970. I took this photo, because my son, at that time the same age I was when I served there, read the service. I was revisiting – my son was there for the first time.

Caught accidentally in the top left of the shot is one of the 8 RAR crew, a big man, over six feet and built like a truck. Tears were glistening in his eyes.

I rediscovered the photo when I was cleaning up my computer hard drive, eliminating images that were no longer worth keeping. I kept this image, and it immediately connected in my mind with the Tarin Kowt grab.

There is a strong sense of loss associated with both Vietnam and Afghanistan, but that’s not all they have in common.

They were conflicts that hummed away in the background of our daily lives. As a nation involved in both, we weren’t officially at war, but young men and women were in harm’s way 24/7 in countries that most of us hadn’t heard of prior to the military commitments.

There were regular media reports, but generally they skimmed across the surface of the reality experienced by the diggers and their families. Like dingoes howling in the night – we heard them, but there were not affecting our lives. They were always there, always menacing, but well in the background.

For the fathers, mothers, partners and children of these Diggers, they were not background. Whether these soldiers served in Vietnam or Afghanistan their next of kin dealt daily with the understanding that at any time they might hear dreadful news. They accepted this as part of their lived reality.

In 1970, I was the one that was away, so I have no real understanding of how my parents dealt with this dread. It would not have been easy. The two hundred and fifty letters they wrote gave me some inkling.

Both of them detested the policy that sent conscripted men off to war – my father, as was his way, volubly and loudly – my mother, quietly and hidden in her heart.

It’s only since I’ve had children of my own that I’ve begun to appreciate the pervasive dread that came with this situation of separation in conflict. Adapting to separation is difficult enough when children are living normal lives. They do grow up and leave home, after all.

Parents and next of kin living the forced separation driven by involvement in conflict endure a vastly different situation.

For my parents, and the families of the serving soldiers then and now, whether they were in Vietnam or Afghanistan, the fact that their loved ones were constantly in harm’s way must have been hard to accept.

Nothing can be done when living this situation, except to endure, to manage, to focus on the mundane and to carry on. My parents obviously did this, as did my five siblings. I came home safely, and life went on.

For about 500 families, in the case of Vietnam, and 40, in the case of Afghanistan, life changed utterly. Many returned, completely changed, both physically and mentally, and they and their next of kin had to live with that.

Our government sought to honour them, and they did this passably well in the case of Afghanistan. Fallen soldiers were brought home with honour. The Prime Minister and the Leader of the Opposition were present at the ramp ceremonies. And so they should have been.

This situation was a product of the times. The war in Vietnam was almost always divisive, and it probably made political and practical sense to treat repatriation in a low key manner. Only the kin of those killed know whether this has been a source of bitterness.

Given that 249 of these casualties were conscripts, it would indeed be surprising if there was no residual hurt. Some of this may have been assuaged to a degree when the recent stalwart efforts to repatriate soldiers missing in action in Vietnam are considered.

The Repatriation of Flying Officer Mike Herbert and Pilot Officer Bob Carver in 2009 were the last two. They went missing during my tour. Bob Carver was from Toowoomba. Now that these two are back, all are home.

It is encouraging to note two other recent developments.

One was the joint visit of the Prime Minister and the Leader of the Opposition to Afghanistan to honour the drawing down of our commitment.

The other was the visit of the next of kin to Tarin Kowt.

Maybe in the last forty years our nation has learnt something about honouring our servicemen and women. Maybe we have also learnt to honour the suffering and sacrifice of their next of kin.

As this is written, casualties in Vietnam exceed those in Afghanistan by a factor of ten. Is it reasonable to conclude that during the last forty years our recognition of the sacrifice of our servicemen and women has improved by the same amount?