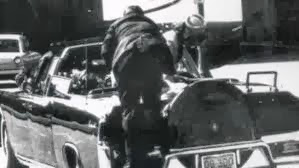 Never ascribe to malice that which is adequately explained by incompetence.

This quote from Napoleon Bonaparte is relevant in the context of a new book written by an Australian ex-detective.

The gist of the story is that John Kennedy was actually killed by a member of his own security detail on November 22nd in 1963.

That, on the face of it, sounds far-fetched, but given the variety and range of conspiracy theories produced since the Kennedy assassination, it’s at least as credible as most.

The interesting point, of course, is that he claims incompetence, rather than a malicious conspiracy, killed Kennedy, and given my personal experience and memories of the weapon in question, I find it strangely compelling.

Put briefly, McClaren (the author) claims that although Kennedy was wounded by a shot fired by Lee Harvey Oswald from the book depository, the shot that killed him was actually an accidental discharge from an AR-15 carried by agent George Hickey who was traveling in the open-topped vehicle following Kennedy’s car in the motorcade.

He bases this on ballistic evidence, and claims that he went to the case in the same way as he did as a detective, with no pre-conceived ideas, and relying purely on verifiable fact.

McClaren claims that the shot that killed Kennedy was a hollow point high velocity round fired from a .223 AR-15, a weapon which in 1963 was a novelty to the security detail. He says that Hickey was not trained on it and was carrying it for the first time on 22nd November 1963.

Occasionally I carried an Armalite rifle 40+ years ago. The Armalite is the military version of the Colt AR-15. I remember that the rotating safety switch had three positions – safe, semi and full auto. Safe was 180 degrees across from full auto. I remember an incident in my unit when a digger (a company clerk) went out on an overnight TAOR patrol carrying an Armalite.

In theory, he was trained on it (a couple of sessions in rookies in Oz), but had never carried the weapon in country.

On the way out through the wire, the clerk tripped, the weapon discharged on full auto, and the high velocity rounds did terrible mischief to the lower leg of the digger in front of him. This bloke was RTAd, and after extensive surgery, his leg was saved.

It was discovered that the weapon was on full auto, which the digger carrying it had confused with the 180 degrees opposite safe.

In the light of this memory, McClaren’s explanation of Kennedy’s death is entirely believable. It’s probably worth a read.
Posted by 1735099 at 08:19

Incompetence may have been a factor.

Normally buildings along the president's route must have all their windows closed. Any open windows are immediately investigated. This did not happen in the building that LHO was in.

All three rounds fired by LHO have now been accounted for. Two into the car and a third is believed to have hit a street sign. It is believed to be the first one fired much closer to LHO but unfortunately it hit the sign and was bounced away.

Analysis of films taken by many of the spectators on the day does show a small hole in a street sign which was directly in the line of fire. It is believed that this was the fate of the third (although first) bullet.

What is new in McClaren's thesis (although the evidence has been known for a long time) is that the round that struck Kennedy in the head had completely different ballistic characteristics from the rounds that LHO fired. McClaren claims on the basis forensic ballistic evidence that it was fired from an AR-15.
It was a hollow point round as opposed to the full metal jacket rounds fired by LHOs Carcano which was a military surplus Italian weapon.

Your expertise is being questioned again.....did you carry an Armalite in Vietnam or did you carry a Colt M16? Section cammanders officers and scouts carried Colt M16s.
Did you know that the Colt AR15 is semi-auto and not selective fire and the safety is only two position and that is safe (9 o'clock) and fire (12 o'clock) the AR15 safety does not have a fire position that can be mistaken for safe.

Your expertise is being questioned again.
I don't claim expertise. An expert is, after all, a drip under pressure.
did you carry an Armalite in Vietnam or did you carry a Colt M16
Neither - I carried a trusty SLR M1A1.
Section cammanders (sic) officers and scouts carried Colt M16s. .
I get it - a "cammander" is someone wearing both rank and cam cream.

In your post you claimed to have carried an 'armalite' on the odd occasion.....obviously untrue. If you wish to appear experienced and resort to lying you should have a good memory. Pointing out my typo to draw attention away from your lack of knowledge won't work and as you should also remember came cream was in short supply during you sojourn to sea.

In your post you claimed to have carried an 'armalite' on the odd occasion.

Indeed I did - on a TAOR for example.
I also carried the radio on a TAOR.

But to be perfectly frank, I couldn't care less whether you believe me or not.

The biggest hassle I have with your semi-literate comments is making sense of them.

In an attempt to make sense of this chunk of mangled prose, I'll attempt to correct it for you - and your errors aren't typos - they're simply poor grammar and construction.

I think you're trying to say that camouflage cream was in short supply. It wasn't, but we stopped using it when some of the diggers developed an allergic reaction when it was applied.
One had to be medevaced.
I have no idea what "you sojurn to sea" means. You'll have to explain.

If in fact you did carry this weapon in 1970 it was actually the M16 manufactured by COLT who began manufacturing around 1963. Chance of you carrying one were slim. Sojourn to South East Asia is what we were looking for.....thought you would have picked up on that one. Once again your attempt to validate McLaren's theory based on your lack of knowledge about weapons is laughable. What company was the clerk attached to .....the one that showed little or no knowledge about using an M16? I don't remember the incident, and I know that personnel unfamiliar with weapons were not issue with them. More infantile corrections in an attempt to deflect from addressing points raised.

I skimmed over your reference where you claimed not to be an expert....the weapon you claimed to carry, commonly referred to as the SLR, had the designation....L1A1, not M1A1 as quoted by you. Your lack of knowledge is astounding.

Actually I used to call it a Gat.
I really couldn't care less what its official designation is, or that you spend your time combing through my posts looking for typos.
Get a life.....