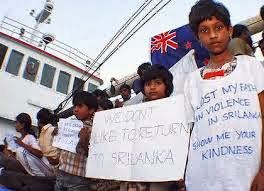 Claims by the Federal Government that Sri Lanka is safe enough for the return of asylum seekers from Australia have been challenged by a representative of Brisbane archdiocese's Catholic Justice and Peace Commission.
CJPC executive officer Peter Arndt made the call after a recent visit to Sri Lanka as part of a group of 30 Catholic justice and peace workers from across Asia and the Pacific.
"My personal encounters with Tamils in the north of Sri Lanka have convinced me that the situation for Tamils and critics of the Sri Lankan Government is extremely difficult," he said.
"I came face to face with survivors of the civil war.
"The systematic way in which Tamil men are being arrested and detained indefinitely looks suspiciously like ethnic cleansing to me." He said the UN High Commissioner for Human Rights Navi Pillay had visited Sri Lanka a week before and came to the same conclusion.

It’s mind-boggling how systematic human rights abuses can be selectively ignored in the quest for stopping the boats.

Quite clearly, the end justifies the means.

Interesting flag in the background....have you been fishing for photos to justify your free entry at all costs for people off boats?