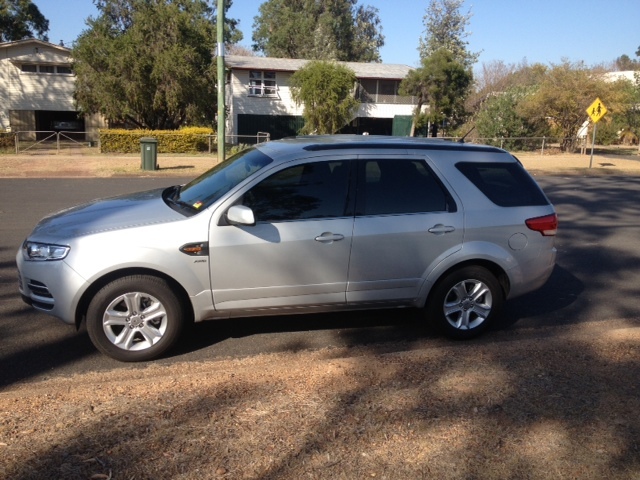 This week I'm working north west of Charleville (as far up the Matilda Highway as Tambo).

Part of the job required the trialling of some bulky orthopaedic kit for a couple of kids, and that meant a large vehicle. Traveling with therapists and all their kit was another issue.


The combination of kit, and two extra people and their luggage, meant that the Nissan Dualis assigned was simply not big enough.


For the first time ever, I complained to She Who Must Be Obeyed (the fleet manager) and she swapped the Nissan for a larger vehicle.


The larger vehicle turned out to be a Ford Territory diesel AWD.

This thing is brand new, and its acquisition makes a departure from usual practice, as the fleet is mostly comprised of imports, mostly Hyundais and Toyotas. This particular vehicle is a replacement for a Hyundai Santa Fe diesel.


I've driven plenty of these Santa Fes over vast distances, and have found them comfortable, safe and reliable. They are however, no match for the big Henry when it comes to refinement and drivability.


The Territory has a 2.7 litre V6, which originates from the Land Rover/Jaguar factories, although in the Territory it has one blower, and in the Jaguar, two.


It pulls like a train, but is much smoother, and the kick in the back when you accelerate past a road train is less obvious than in the Korean equivalent.


The Territory gets up and boogies, however, but does so with refinement rather than brute force.

It also drives well, with a more responsive and precise steering feel.


I found it very comfortable, and the seats both front and back deliver pain-free traveling even after all-day journeys.


These things do not have a cast iron reliability record, with recalls for suspension problems, but many Ford dealers will throw in a five year warranty (to match the Koreans) for not much money.


It's a great shame that Fords won't be manufactured locally any more in about eighteen months. To my way of thinking, they're a great local product, which has not been marketed properly.


For this particular task (long distance travel with a load on board in the Australian bush) I can't think of a more suitable vehicle.


Update - Fuel Consumption averaged 8.3 lit/100km. Not bad for three up plus a heap of gear.

Killed off by the yanks.

It's replacement is being designed in Australia, so maybe we'll see something worthwhile from Ford global

Yep, but they're using American sourced front drive architecture which is inferior to the current (BF Falcon) rear drive chassis.