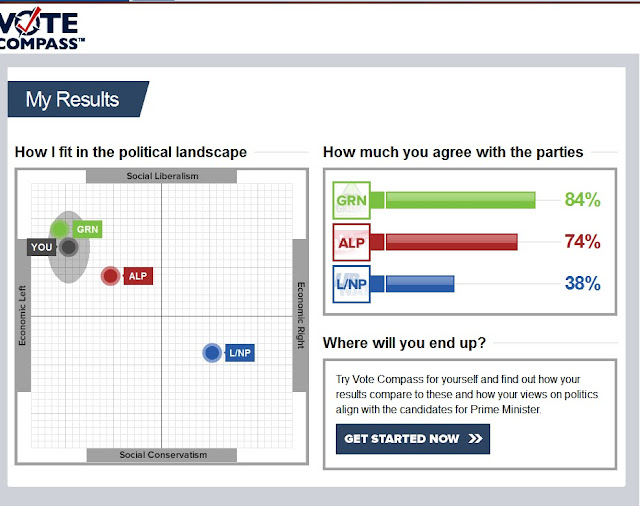 That will be after my next big trip – Charleville, Cunnamulla, Tambo etc. Usually after a week like this I’m in recovery mode and do very little of substance on the Saturday following, but I will have to do my civic duty and vote.

This means I need to follow a time-honored three stage process to determine my choice of candidate in each house. Contrary to what is presented in the MSM, I don’t get to vote for Tony Abbott or Kevin Rudd.

The three steps in this process are –

The trouble is, given recent history (particularly as it refers to the Queensland state poll held in March last year); the published party policies can have absolutely no bearing on the conduct of the newly elected government.

The LNP completely ignored their promises after that election, and we saw mass sackings of public servants, withdrawal of essential services to the most vulnerable sections of the community, and school closures, none of which had been flagged before the election.

In addition, the two major parties, on one important issue (asylum seekers), have adopted an institutionally brutal policy that I find abhorrent, and that I couldn’t support even if threatened with torture (such as being forced to watch another leaders’ debate).

So my time honored process is no longer relevant.

This time, I’ve gone to Auntie (the ABC) for guidance.

They have this carefully researched programe on-line. It was developed jointly by their election Guru (Antony Green) and the Universities of Sydney and Melbourne.

It’s called Vote Compass. Try it – you might be surprised.

It puts you through a series of questions, and figures out where your party affiliations lie. I reckon it’s about right in my case.
Posted by 1735099 at 08:02

I guess the beard is a dead giveaway.

I am surprised by the ad below this post.

I believe all candidates should have sex appeal!

I believe all female candidates should have sex appeal.....makes more sense to me.....no matter what the numbers show.