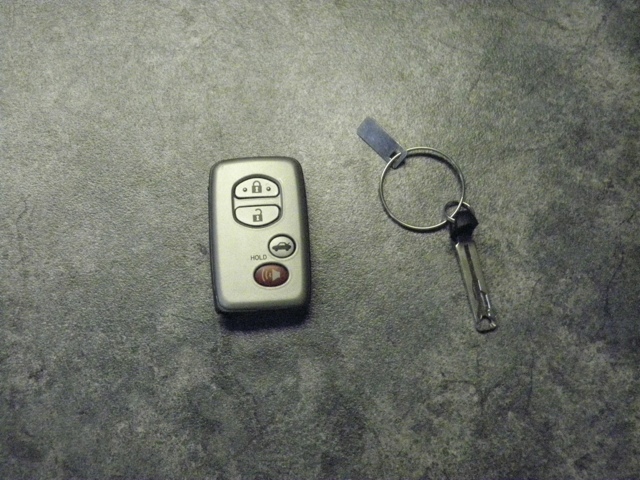 Back in 1982, Renault introduced RKE (Remote Keyless Entry) in its Fuego coupe..

The French, in their own inimitable style, called the system "Plip", possibly because that was the noise it made when you pressed its button. The Fuego, a bugger of a car, hasn't been remembered fondly in Australia, but it was the first to use this feature. It's commonplace now.

She who must be obeyed (the fleet manager) allocated me a Camry Hybrid for my trip this week. This car uses a sophisticated state-of-the-art version of RKE, in that so long as you have the key in your pocket, you can get in and out of the car, open and close the boot, and start the engine.

You have to press a smick little button labelled "start" to do this last thing. Interestingly, this doesn't actually start the engine. It merely activates the on-board systems. Typically, you travel a score of metres silently on electric power before a shudder indicates that the petrol engine has actually started.

Or it should, if the little battery in the key fob is working.

Now this was more than a little inconvenient. I couldn't get into the car. I couldn't open the boot. I couldn't start the car. I had pulled up at Surat, halfway between Roma and St George to answer a call of nature.

I couldn't phone for help, as my phone was locked in the car, connected to the excellent bluetooth system which, of course, was inoperative.

After a regulation bout of swearing (in Japanese when I ran out of English) I examined the defective little gismo closely. There was a cover marked "push" on one side. When I pushed this cover and pulled on the little loop, a key shaft detached itself from the fob.

With this, I was able to open the door and retreive the handbook. This same handbook explained how to start the car when the key fob battery was flat. (A little placard had appeared on the dashboard explaining that this battery flatness was indeed the problem).

What you are encouraged to do is to hold the Toyota logo on the back of the key fob against the "start" button and say "konichiwa"*.

This worked, and I was able drive to St George, where the helpful Toyota dealer had a replacement in stock.

When I phoned the fleet manager, she said that the other Camry Hybrid in the fleet had done exactly the same thing about amonth ago. It had just clocked up 50000 kms. The one I was driving had done 52000 kms. The obvious conclusion is that around this distance is the life span of the battery.

*I made this bit up. You don't have to say "konichiwa".

When Paula's grandson was 6 he went to Vietnam. I told him that I knew a bit of Vietnamese language and I said to him "When you greet someone you say Konnichiwa."

He paused for a second and said, "That's not Vietnamese, that's Japanese!"

Never try and fool a kid.

And Ted, fortunately you weren't his headmaster at any time in is formative years.