Francis on the Market 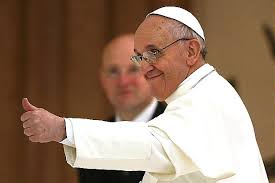 The worldwide financial and economic crisis seems to highlight their distortions and above all the gravely deficient human perspective, which reduces man to one of his needs alone, namely, consumption. Worse yet, human beings themselves are nowadays considered as consumer goods which can be used and thrown away. We have started a throw-away culture. This tendency is seen on the level of individuals and whole societies; and it is being promoted! In circumstances like these, solidarity, which is the treasure of the poor, is often considered counterproductive, opposed to the logic of finance and the economy. While the income of a minority is increasing exponentially, that of the majority is crumbling.

This imbalance results from ideologies which uphold the absolute autonomy of markets and financial speculation, and thus deny the right of control to States, which are themselves charged with providing for the common good. A new, invisible and at times virtual, tyranny is established, one which unilaterally and irremediably imposes its own laws and rules. Moreover, indebtedness and credit distance countries from their real economy and citizens from their real buying power. Added to this, as if it were needed, is widespread corruption and selfish fiscal evasion which have taken on worldwide dimensions. The will to power and of possession has become limitless.

This is a quote from a recent speech made to diplomats accredited to the Holy See by Pope Francis.

He is obviously no admirer of the mantra that the market rules, and is our salvation.

He calls this belief a cult, and he's not far from the mark.

I probably would have used slightly more colourful language. For mine, the market can be described as behaving like a reptile, rather than resembling a cult.

That is, I guess, a distinction between what it is, and what it does.

Ask Google - they have used the market successfully to avoid paying their fair share of tax for years.

"The will to power and of possession has become limitless"....if you doubt that statement, look to the Catholic Church for an example.

"Worse yet, human beings themselves are nowadays considered as consumer goods which can be used and thrown away.".....would you rather be an Australian altar boy or an American altar boy? George thinks that Americans have more value.