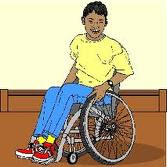 There are a few kids on my caseload with Spina Bifida.
This used to be a relatively common congenital malformation, but is becoming less so possibly because of the use of folate.
One of these kids attends a very remote school, and I have been supporting him there since 2005. As a consequence, I've become very familiar with the barriers to independence that his disability confers - and until recently was feeling pretty useless in terms of contributing to his quality of school life.
This was because he was not independent in terms of self-care.
Generally, Spina Bifida results in incontinence. Every case is different, but it's always a problem. With this boy, bowel continence was well-managed at home, but he needed to be catheterised at school to ensure that his bladder remained healthy. Bladder infections are common with this disorder, and if the bladder isn't completely voided, infections can develop which can make life very difficult for both child and carer.
With this lad, an elderly relative would drive to school daily and perform the catheterisation. My experience with these kids has been that by the time they reach upper primary level, they have usually learned to manage the process (called CISC*) themselves.
I therefore set up a training programme for this boy and his male teacher aide so that over time, he would learn to be independent. Trouble was, he was unwilling to be trained. Despite flying a properly certified nurse trainer out a number of times, and many discussions with both him and his relative, no progress was made.
This went on over a number of years, the aide (who was the only constant staff member) was becoming more and more frustrated, and I was feeling totally useless. This frustration was felt less by both the special needs teacher and his class teacher, as they generally changed every year, because of the rapid staff turnover typical of remote schools.
Problem was, of course, that he was completely comfortable with the arrangement.  He wasn't embarrassed by his relative coming up to school, as he's never known anything else. This relative (who never seemed to get ill) was a caring person, so prepared to help so long as it was necessary.
I was beginning to wonder how this arrangement would operate once puberty arrived or the elderly relative became infirm.
Last week an email arrived from the special needs teacher. She told me he was now totally independent with the process, and the elderly relative no longer was needed at school.
What had changed?
The turning point was his decision that he would manage it himself. He learned the process in about a week once he'd made that decision.
How had he come to that decision? The breakthrough was his going on a camp on the coast with a group of boys with Spina Bifida his own age. At this camp he saw others with the same problem managing it independently. The penny dropped.
Thinking about it, this was fairly easy to understand. Because of his isolation, he'd simply never met anyone his age with Spina Bifida before, so he had no reference point. I guess peer pressure may have had something to do with it.
His attendance at the camp was organised by the local disability services coordinator - a wise Murri bloke with a very easy going manner, and a valuable talent for cutting through bureaucracy. I've known him since 2005, and he's one of the quiet achievers in the game.
I phoned him yesterday to thank him for helping to change this lad's life for the better. He sounded a bit embarrassed - I don't think anyone's ever done that before.
He mumbled something about being a member of a team, and then said  - "Nothing I did, brother - just connected all the bits together".
He told me he now has another problem - the elderly relative is feeling a bit unnecessary, and he's talking to her a lot. I know the feeling - it happened to me when the youngest of our four left home….
*Clean Intermittent Self Catheterisation
Posted by 1735099 at 17:55