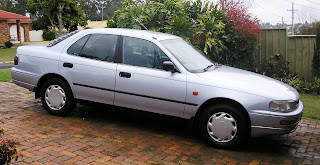 Last week I had some fun looking at clunkers.
In my day, we used the word "bomb" - but since 9/11 etc, that word has accrued a much more sinister range of associations, and "clunker", like many other descriptive nouns, has been linguistically dragged across the Pacific
By definition, a clunker is a car that is nearing the end of its life, and they're mostly used by those who are not blessed with bulk dollars, and/or regard the motor vehicle simply as a means of getting from A to B. Generally these people are not at all concerned by less pragmatic issues such as prestige, appearances and the effect said car has on the ego.
This purchaser's description fits my second son very well. Unlike his father, he has absolutely no interest in, or obsession with, motor vehicles. This is probably a virtue, but when it comes to buying cars, it can present problems.
Because of this disregard of matters motoring, he has no idea of what terrors lie in wait for those buying at the bottom of the market, which he is forced to do as an impecunious student. Simple solution - commission dad to find the car! After all, I've owned over thirty at last count, and have fallen for every possible car-buying trap in the course of this history.
Choosing a car for someone else concentrates the mind. In this case, my son's criteria were that it should cost less than $5000, be able to pull up the hill to Adelaide's Flinders University with ease, and be cheap to run. He was keen on six cylinders until he realized how much such a vehicle would cost to register. 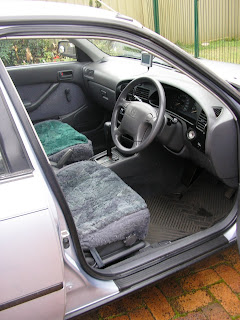 I had a different agenda. As far as I was concerned, the main factors should be safety, engineering integrity, and reliability. Knowing my son's approach to motoring, the thing would also have to thrive on neglect.
I did the rounds of the wholesale yards at Moorooka. Anything at that money, with driver's airbag, automatic (he doesn't have a manual licence) and four cylinders was fair game. I also armed my self with a copy of the excellent Dog and Lemon Guide. This is a useful publication, spoiled only by the fact that it is written in New Zealand, which means that some references are irrelevant here. Strangely enough, there is actually a wider variety of makes and models available across the Tasman.
Some real horrors lurked there. Some of them were cars. Some were the people selling the cars. I found one yard which had hundreds of cars, but very few sales personnel. The salesman I did eventually track down had no idea of the asking price of any of the vehicles. He was, as he explained to me, selling finance, not motor cars. The car was simply the lever used to sign punters up to dodgy finance schemes so that they could part with the maximum amount of dosh across a sustained period of time. When he found that my son was paying cash, he lost interest.
After looking at over thirty cars, identified by computer searches over a period of three weeks, I narrowed it down to a couple of Toyota Camrys, a Hyundai or two, and a Kia Shuma. I'm no great lover of Korean cars, but after 150000 kilometres, they compare well with what else is around.
Korean cars aren't much fun to drive, but that wasn't one of the criteria.
I eventually settled for a 1996 4 cylinder Camry. I know - that's Japanese, not Korean, although this one was actually made in Oz. The ask was $6999, but they took my first offer of $5500. I probably should have offered less. I subsidised the purchase, as it was very hard to find anything advertised for less than $5000 that didn't look like trouble.
I drove from Brisbane and it pulled up the mountain (the notorious range crossing), smoothly and without drama. A wheel alignment and balance has sweetened up the steering, and it has very efficient air conditioning. A few longer trips here and there will show up any major issues, before I take my courage in both hands and drive it to Adelaide to meet its new owner.
Hopefully my Premium RACQ membership won't be needed.
Posted by 1735099 at 16:33

The first of the wide bodies?

That's the one. Are you sure it was the car seats? Perhaps lugging a monstrous back pack through SVN for long periods of time had something to do with it? I don't know too many ex-infantry people without some form of back problem. I've had chronic back trouble, which I though was a result of lifting kids (I worked hands-on with kids with physical impairments for many years as a teacher) but my orthopaedic surgeon reckoned it was caused by jumping out of choppers with a backpack. He told me if I didn't get it fixed, I'd end up like the kids I was teaching - in a wheelchair. He sent me to a Physio who prescribed a series of strengthening exercises which worked.

I've got more problems with my elbows and mouth - it's from continually crawlin' through the jungle on my elbows and knees with the bayonet in my mouth!

I had chronic back pain - it eventually forced me out of my favourite past time (lugging a big lump of metal) to one a bit less taxing (driving a lump of metal).

After a decade on anti-inflammatories to control the muscle spasms that caused awful sciatic pain, I found that cycling fixed it all up. Being slightly bent over on a road bike does wonders for stretching the lower back and leg muscles that were giving me grief. The bike provides plenty of stretching and strengthening where it's needed.

Of course I now have a shitty neck from being hit by a car whilst on the bike.... but them's the breaks.

I can't stand any type of Hilux - 5 minutes in one of them bounces my back to pieces.