This has been an off-work week, so I've had more time than usual to blog, and to comment on others blogs. I've had great fun at Kev's place.
Bolt steadfastly refuses to post my comments, except where his moderators go to sleep, and a comment here or there sneaks through.
I've collected screen shots of my censored postings this week, so you can understand what dreadful bitter words I've let loose that aren't fit for your eyes - gentle reader. Double-click on the images to make the screen shots readable. 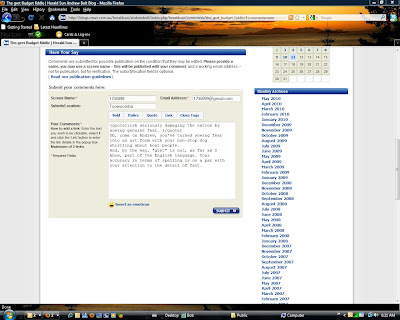 Bolt's original post has errors which I corrected. Strangely enough, these errors are still there. The other point about Bolt's post is that it draws attention to the fact that push factors are more important than appearing tough, as the recent macho posturing has changed nothing. Obviously, Bolt would prefer that attention wasn't drawn to this, as it shows that his contention that the problem can be controlled by returning to the policies of the Howard era post Tampa is a nonsense.
Bolt introduced another theme relevant to asylum-seekers with his posting about ex-Liberal MP Peter Katsambanis's claims that the Refuge Review Tribunal was being heavied to admit undeserving individuals. The transparent bias of his blog is never so clear as around this carefully set-up faux issue, but when I pointed it out I was again censored. 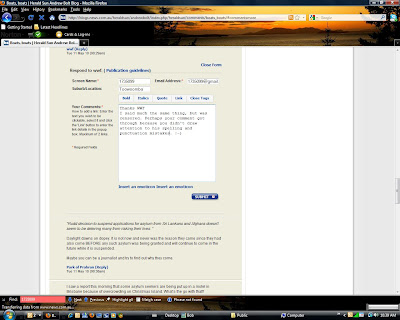 
"a disgruntled right-wing tabloid hack" - I like it!
My last censored post was an attempt to summarise - 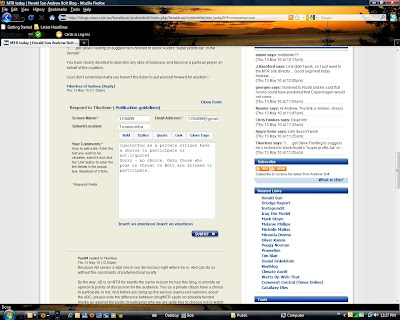 I trust that none of you have suffered irreversible psychic damage through reading this!
It's been a fun week.

A friend of mine sat on the Tribunal for 3 years. They could see that the writing was on the wall, and that they would never be reappointed, so they quit.

Bolt was a bit over the top, but according to my friend, not wide of the mark.

BOAB
I'm obviously in no position to know or understand your friend's experience, or that of Peter Katsambanis. All I can rely on, therefore, is the outcome of decisions made by this tribunal. If they are being snowed, it should show up in a trend to allow more refugees claims to be recognised.
The following was posted on Bolt's website -
"There is no significant difference between the last year of the Howard government and the first two years of the Rudd government. If there is pressure on the members of the tribunal, it’s not showing up as more cases being affirmed.
2006/07, 3102 cases, 71% Affirmed, 21% Set aside
2007/08, 2318 cases, 72% Affirmed, 18% Set aside
2008/09, 2462 cases, 73% Affirmed, 19% Set aside"
The only trend I can see is a slight reduction in the number of reviews.
For the full story, go here - http://www.mrt-rrt.gov.au/Decisions/Decisions-Bulletin/Bulletin/default.aspx?retain=true&pg=3

Some of the people making it through the tribunal are probably not going to make great citizens.

One scam is for Chinese to say that they are Christians, and to claim persecution. However, when questioned on basic knowledge of the Bible (Q: Who was Jesus?) they have no idea. They've been told to use a certain line of approach by their lawyers. Those types are giving genuine refugees a bad name.

Then there are the dead nasty types coming in from Iraq, claiming to be refugees. One bloke was fingered as having been a prison guard under Saddam who was fond of torturing and killing people. He utterly terrified everyone at the detention centre he was held in. The tribunal gave him the boot, but the Supreme Court overturned the ruling, and he is now living in a suburb somewhere. He should have been flown halfway home and pushed out the back of a Herc at 30,000 feet.

One indicator of a softer policy will be fewer cases going to the tribunal - immigration staff will think, "Why should I bother, they'll just let this idiot in" and rubber stamp the file.

BOAB
We could discuss this, civilly and respectfully swapping anecdotes and statistics until the cows come home, and probably agree to disagree at the end of it all. We'd be collectivelly a little wiser as a result.
The point of my post about Bolt is that he doesn't allow free and open discussion on his "blog", but at the same time allows abuse of anyone who doesn't agree with his opinions. Just do a search on his blog under "1735099" and see what you come up with. I put quotes around "blog" because I believe what he runs isn't a blog - it's more accurately an on-line version of shock jock radio.
I harbour this weird idea that free and open discussion is the hallmark of a healthy democracy - silly me!
By the way, this document is interesting - http://www.refugeecouncil.org.au/docs/refugeeweek/2009/RW_Common_myths.pdf

Bolt appears to be a lower grade version of the US opinion show host Glenn Beck - who recently got taken apart on the daily show in a very amusing manner: http://www.rationalape.com/2010/05/master-of-doublethink.html

We need someone to do that honour for Bolt who is so tiresome in his treatment of reality that I have to take him second hand as I can't read his blog.

Grendel
I like it! How about posting a link on Bolt's blog?
On second thoughts - probably a waste of time - it wouldn't be published.