Monsoon in the West 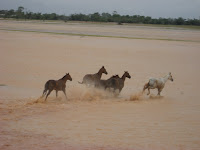 On Monday, Tuesday and Wednesday I headed westward again for the first time in 2010 to work in Roma and district.

I was looking forward to this trip for a number of reasons - one of them being that for the first time, my bride was accompanying me, and it was her reintroduction to paid employment after three years of “retirement”.
Jupiter Pluvius delivered a set of surprises. 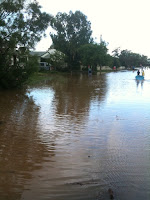 The remains of Cyclone Olga blended with a front from the west, and they seem to have met up somewhere close to Roma.

We set out in two different vehicles. A new fleet car was mistakenly delivered to Warwick instead of Roma, and I was asked if I’d take it to Roma. The shiny bums in Q Fleet in Brisbane (or the distributors in Hyundai in Brisbane) obviously operate without benefit of a map, or a basic knowledge of geography. This was the first time I’d ever been asked to do this, and it meant we’d be travelling in different vehicles – not the best result.

My bride is not a confident long-distance driver, and the conditions were horrendous – B doubles carrying grain with about 300metres of spray following – but she came through with flying colours. Being one of eleven with five brothers probably prepares you for a range of challenges.

Once in Roma, conditions didn’t improve. We overcame the minor hassles of inside-out umbrellas, ankle-deep mud, and soggy files and equipment, and completed our school visits. We then attempted to drive back to the office to write reports and begin some follow-up.

The weather gods had other ideas. What started as a drive to the office ended up as a rescue operation. Bungil Creek had broken its banks, and the area where the fleet vehicles were parked was rapidly flooding. Because it’s possible to drive only one car at a time, all spare staff were rounded up to move the cars to higher ground. By this time the soil was so sodden that it had turned to mud. I discovered that Hyundai Santa Fes handle sticky mud much better than Holden Captivas. It’s got something to do with the way the traction control is programmed. Neither are genuine four wheel drives, despite the labels.

It rained most of the night, and my bride was unable to get to Injune, where she had work that morning. Apart from the fact that the road was dodgy, the school was severely disrupted as many of the teachers weren’t able to get to work because of rising creeks.

My second days work in town was much like the first, and by the time the day was through I had given up trying to stay dry, and my shoes were coming apart. In a funny way it reminded me of patrolling in Vietnam in the monsoon, where after a while you stopped caring whether you were wet or dry. The difference was that in Vietnam it didn’t matter how you looked – here it did. It’s difficult to give a good impression with hair plastered everywhere, and your shoes tied around your neck by their laces.

By Wednesday, the weather had lifted a bit, and we were able to return east via the Surat Development road (where we had work to do in schools along the way) without getting our feet wet.

As I write this, I am listening to local ABC describing further local flooding at Roma after another deluge overnight. There are minor evacuations and the SES is on the job.

I asked my bride whether she had enjoyed the trip. I had, after all, been explaining how hot and dry it was out west. She mumbled something about an “adventure”, but was smiling when she said it, so I guess she doesn’t think I’m completely barmy.

One of pics was taken in town - the other (the horses) much further west near Eromanga. I didn't take either of them - Roma office staff did and posted them for all to share.

I wasn't risking my camera in that lot.