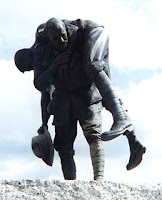 The English language is a wonderful tool. The derivation of the term “entitlement” is an example. The "titled" part of it intrigues me.

One of the dictionary benefits of the term is –

the right to guaranteed benefits under a government program, as Social Security or unemployment compensation

Connecting with many of my fellow section members a few weeks ago has alerted me to the fact that I am one of only a couple of these blokes who is still working and hasn’t been forced on to some form of benefit as a result of operational service. In my mind this indicates two things – one is that I’ve been very lucky – the other is that it provides sad evidence of one of the often-overlooked outcomes of war.

The statistics in relation to Vietnam Veterans are no different from those out of conflicts ranging from World War One, through World War Two, Korea, and more recently, Timor Iraq, and Afghanistan.

Recent publicity about the children of a partner of an Afghanistan casualty has only reinforced the notion that when it’s all over, any compensation has to be fought for.

I completely fail to understand the mindset of many conservative commentators who advocate military adventure as the first, last and only solution to international disagreement, or in the current context, international terrorism. This reptilian brain reaction continues to hold sway with those who believe that you can destroy an idea by killing those who support it. I would have thought that the Vietnam experience might have focused some attention on this enduring myth, but it seems to have gone through to the keeper.

At least many in the military have begun to see that protection of the people and the provision of basic security is the first step to a successful counter-insurgency, and the term “victory” as applied to these conflicts continues to be used by the commentators rather than the commanders. The commanders have heard of Maslow’s hierarchy.

But back to “entitlement”.

The word conjures up images of Lords and Ladies, royalty, and a whole heap of concepts that went out with button-up boots. It belongs to the monarchy, wigs on judges and executive car parks.

As an avowed republican, I’d like to see the term relegated to the dustbin of history.

The more accurate term is “compensation”. It’s about time two reforms were organized –

Compensation for war veterans of all conflicts should be brought into line with the benefits that accrue to ex-politicians, and the term “entitlement” should be removed from all reference to service pensions.

And perhaps, a secret ballot of all registered veterans should be held before we commit to any new conflict. That would be interesting.
Posted by 1735099 at 06:45

Interesting comment on who is working still. Dad told me that when he was a kid, our town was full of amputees from WWI. All of them worked in one capacity or another - the country wasn't anywhere near as rich as it is today, and the numbers of wounded were staggering, so the pension didn't amount to a lot. He said it was quite normal to be served by a one legged butcher or a one armed newsagent. We forget how many of our major public hospitals started life as veteran's hospitals.

I'd hate to have been one of those blokes who served in Rwanda. Watching people being chopped up, and being able to do nothing about it, would drive any normal person totally insane. I think I would have opened fire, and taken my chances with a court martial - but it's easy to say that in hindsight.

In our family, I like to contrast dad (Navy, WWII) who gave up work only a few years back in his early 80's, and his older brother (Army, PNG etc etc) who also worked into his 80's - with my uncle (too young for anything) who retired as soon as he got an inheritance in his 30's. Sure, their service knocked the stuffing out of them (dad and uncle are both frequent fliers with veterans affairs), but their grit kept them going into old age. One of Dad's mates was in Changi, and he kept going into his 70s. Frankly, I think they had no idea what they were going to do when they retired, so they just kept on working!

If you died tomorrow your wife will not automatically get the war widows pension.

Did you know that?

She would have to fight DVA for it and unfortunately she may well join the other 225,000 war widows that have been knocked back for the war widows pension.

I am an advocate and most of my work involves WWII fellows, who like you, thought they were OK.

Now in their twilight years they turn to pension officers and advocates who volunteer their time and energy to help them though the maze of dealing with DVA.

See a pension officer now before it is too late and get information to DVA that may well help your wife in the future.

I think you are misinformed and naive.

Cav
I'm optimistic, rather than misinformed and naive.
I've seen a pensions officer, and have a DVA file. I'm aware of my current entitlements, and what I may need in the future, but I'm fortunate enough to have earned enough during my working life (which continues whilst I stay healthy) to provide for a comfortable retirement.
I don't intend ever making a claim, and my wife would be OK in the event of my death.
My Dad was a WW2 veteran, and DVA was a great help to my Mum during her declining years. She never needed a War Widow's pension, but they were very good to her in terms of managing her medical support when she became very ill towards the end of her life.
Keep up the good work.

It isn't so much about the pension, but rather the gold card that comes with it.

If your wife has a gold card then ALL her medical costs will be met by DVA.