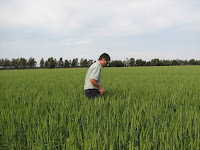 As I travel west along the Warrego, I'm noticing heaps of crudely crafted signs referring to a group called Coal4breakfast.

The first time I heard of them was at community cabinet at Toowoomba earlier in the year when they staged a well-organised (and well-mannered) picket as the cabinet ministers arrived. These people aren't smelly hippies - they're salt-of the-earth farmers from grain properties on the darling Downs.

Their beef is the taking out of coal-mining leases on prime wheat and barley-producing land by some of the more aggressive coal extraction organisations. These groups can see a handy profit to be made, and are aware of the existing infrastructure (particularly rail) ironically built to move the grain.

Already, the railways is refusing to carry grain unless the farmers enter into written up-front agreements. This results in an ever-increasing number of grain trucks on the highway, which are swiftly destroying the road. This problem goes as far west as Thallon.

So, apart from threatening the livelihood of the locals, wrecking the environment, and destroying the quality of life enjoyed in these townships, this industry is going to bugger the vital road infrastructure.

But it's OK, because the state government will make lots from the royalties, and the mining companies will also make a motsa.

Well - not if these people have anything to do with it.

Get behind them - there's plenty of coal to be sourced from areas not useful for other purposes, and we keep hearing how much is out there.
Posted by 1735099 at 07:29

Can you give a bit more detail on the agreements that the railway wants farmers to sign?