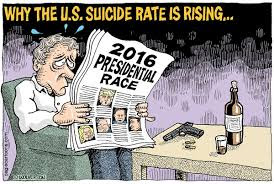 The media is full of conjecture about how the USA will fare under a Trump presidency.

Frankly, dear reader, I couldn't care less. If he turns out to be a disaster, the Yanks who voted for him (or perhaps the 44% who couldn't be bothered voting for anyone), will deservedly wear it. I am interested, however, in how the rest of the world, especially Australia, will be effected - selfish of me, I know, but we had no say in it.

It's generally accepted that the best predictor of future behaviour is past behavior. Let's examine the past behaviour of Trump, the individual, and more importantly, the behaviour of those historical figures who have used the same kind of rhetoric and methodology that he has, to gain power.

Looking first at Trump's behaviour as an individual, a couple of characteristics stand out. I couldn't summarize then any more effectively than old mate Andrew Bolt on October 12th 2016 when he described him as  a braggart, buffoon, liar, narcissist and sexist with almost no political principles.

It would be difficult to disagree with Bolt, given the way Trump has conducted himself during the campaign.

He made fun of a person with a disability, made offensive statements about many women, boasted that he could sexually assault women because of his power, called Mexicans "rapists" and advocated racial profiling.

Certainly, his opponent was no political cleanskin, but compared to his behaviour (most of it well documented, and often broadcast live) she was calm, dignified, and reasoned.

So much for individual character.

Now let's look at history. There are two major historical precedents. Both were individuals who took political power by harnessing popular discontent in times of economic hardship. One also used the fear of a minority (the Jews) to harness reactionary forces.

I'm referring, of course, to Hitler and Mussolini. Trump's rhetoric has an uncanny resemblance to Hitler's (if less sophisticated) and his physical appearance is not unlike Mussolini's. Now rhetoric and appearance aren't necessary relevant, but policies are.

Trump's policies (rampant nationalism, infrastructure building, removal of minorities) have a chilling resemblance to those of Hitler, and to a lesser extent Mussolini. Whilst military expansionism seems to be no part of his declared policy platform, he has promised to expand military spending, whilst at the same time questioning existing alliances.

Ironically, the destabilizing effect of withdrawing from alliances may serve to encourage expansionism in the Russian Federation, in turn emboldening rogue states such as Iran and North Korea, so the end result may be conflict, just as it was in 1939.

Then of course, there's the Middle East. His policies here are vague, but he has been reported to promise "bombing the shit out of ISIS". Given that ISIS is a terrorist organisation, it is difficult to imagine any outcome of this that wasn't similar to throwing petrol on a fire.

After all, George W Bush's "bombing the shit out of Iraq" and his subsequent mishandling of the result of this wholesale destruction, was largely responsible for  the rise of ISIS.

So the prospects for peace and stability aren't rosy.

I see a symmetry between 1939 and 2017. Think about it - all the ingredients are there - nationalist movements in Europe, an Asian nation (China) seeking influence and economic domination, and an isolationist USA. Remember the Japanese aspiration for s South East Asian Co-prosperity sphere, and what happened when it was stymied by the US?

Certainly, 1939 Japan and 2017 China are poles apart, but all the ingredients for major conflict are there. For Australia, the implications are challenging to say the least. There is a Swahili aphorism that says "When elephants fight, the grass gets trampled". In this context, Australasia (including Australia) is part of the "grass".

The other eerie piece of symmetry relates to the passage of time since the two great market collapses. The Great Depression began in 1929. Ten years later war broke out. The GFC began on 9th August 2007. You can supply the next sentence.

So, gentle reader, I guess I have done nothing to make you feel cheerful. We can take comfort, I suppose, that the majority of our political leaders in this country are generally smart resourceful individuals. Let's hope that they're on their mettle during the next four years. They'll have to be.

In the meantime, read this.