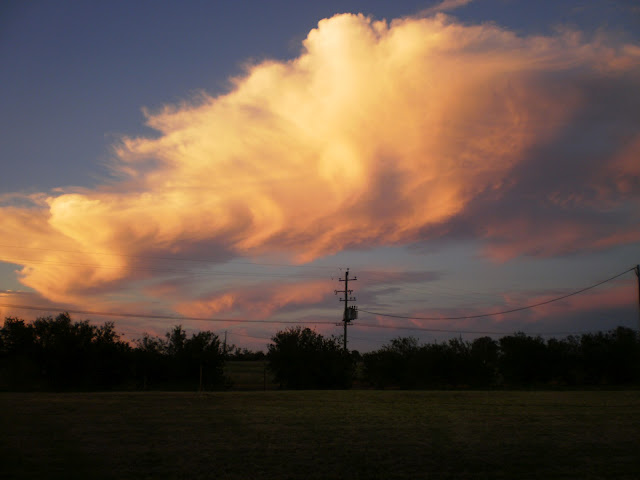 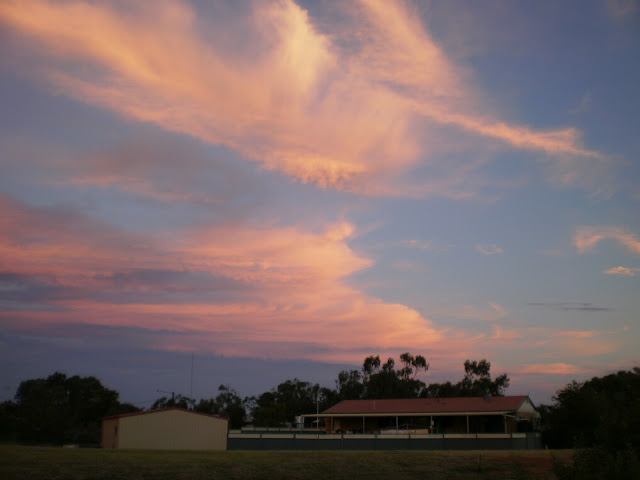 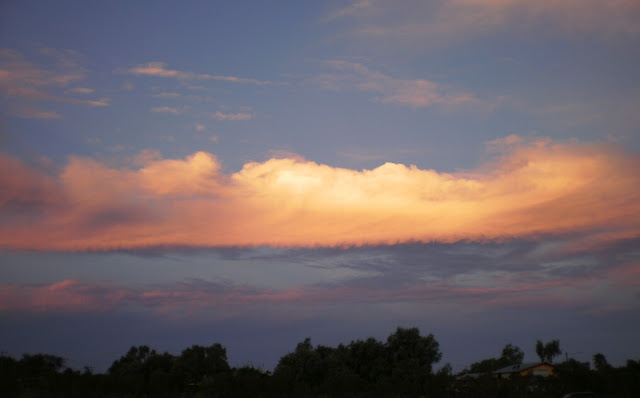 Muttering Rotter's Thoughts on a Dualis 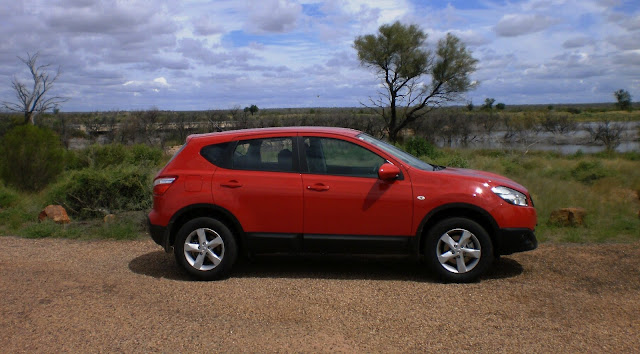 If I had my time over again, I'd be a muttering rotter.*

It sounds to me the perfect occupation. Driving a wide variety of cars and being paid to write about them can't be bad. Having said that, along with the job would go deadlines, and I've never been much good at meeting them.

Which brings me to an attempt to review the Nissan Dualis. I've just travelled 2300km in a bright red example, across a variety of roads, although the bulk of travelling was at 110km/hr on straight bitumen roads. I have no idea why it was red. Maybe Nissan had a job lot of red ones they unloaded on the fleet market.

There are a range of vehicles available now that are derived from AWD SUVs. For those of you offended by acronyms, AWD means all-wheel-drive (as opposed to 4WD - four-wheel-drive) and SUV is transpacific jargon for sports-utility-vehicle.

I say derived, as this thing is not four-wheel-drive, even if it looks like it should be. Just to make sure I crawled underneath and counted the diffs. There was one only, and it was up front.

Why so? I guess the manufacturers have realised that they can take advantage of whatever image a car that looks like a four-wheel-drive delivers, and at the same time produce a lighter, more fuel-efficient vehicle for less money. The advantages include higher ground clearance, easier ingress and egress (especially for those like me approaching dotage) and a higher driving position. Most punters couldn't tell the difference from behind the wheel.

It's definitely a lot easier to access that my MX5, but to be frank, not much better in this aspect than our Focus. It does, however, have a very user-friendly driving position, and the elevated nature of this comes in handy when overtaking. The higher you sit, the further you can see.

It is reasonably fuel-efficient, with the readout indicating 7.5lit/100km when I returned it to the fleet depot yesterday. At the end of the westward journey it was showing 6.9. I guess driving into the teeth of a South Easterly had something to do with that.

I was quiet, comfortable, and a doddle to drive. I wasn't all that impressed by the performance, but that may be a perception rather than a reality. It uses one of those mysterious CVT transmissions, which holds the motor at a level which maintains the maximum torque to produce best acceleration and economy. Consequently, power comes on very smoothly, and sinking the slipper seems to produce more noise rather than more speed. For all that, it seemed to overtake quickly. That's important given the procession of mining equipment (including whopping great dongas) that has become the Warrego highway.

It cruises at 110km with the revcounter showing 2100, which means it's a fairly relaxed cruiser for this size of vehicle. No doubt a diesel would be even more cruisy, but despite the fact that the Nissan X-Trail packs a diesel, this one does not - at this stage anyway.

The only negative I discovered was a bit of back pain after one 300km stretch which I put down to a badly-positioned drivers' seat. A bit of fiddling with the rake lever cured this, and I emerged pain-free after later long stretches.

The verdict? This is an honest, comfortable, practical example of a new segment. At $25990 for the manual, it's good value.

Its rivals in this growing sector of the market include the Mazda CX-5, Kia Sportage, Hyundai iX-35,  and Ssang Yong Korando.

There's still plenty of water about between Cunnamulla and Thargomindah. This otherwise fairly boring stretch of road takes you past Lake Bindegolly, one of a cluster of lakes, some salt, some freshwater about 40 kms East of Thargo.
Usually, these are dry.
After two exceptional seasons, they're full and alive with birds and fresh looking vegetation.
All these shots were taken with the trusty iPhone. 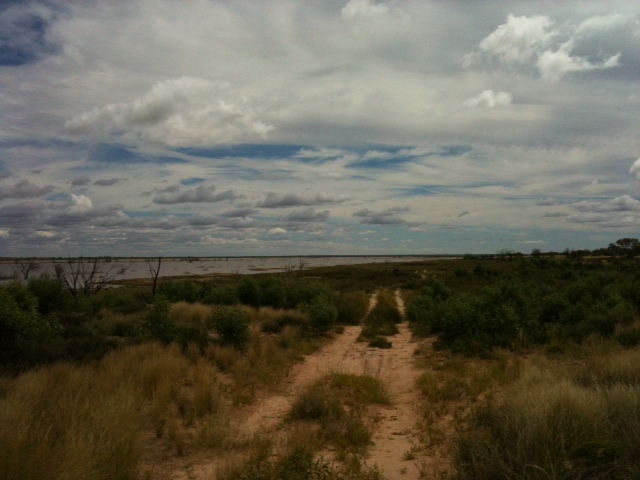 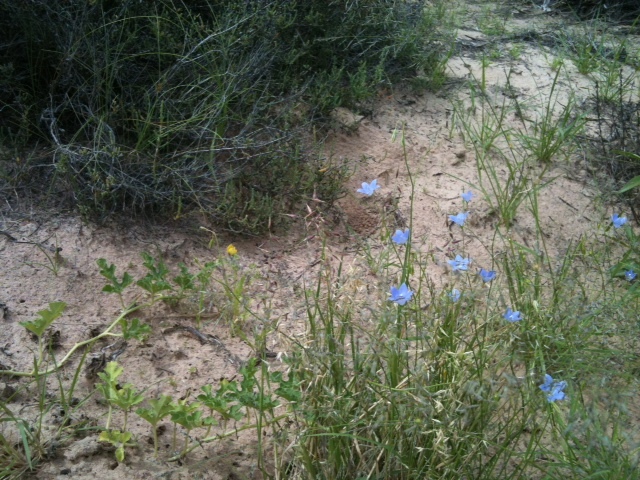 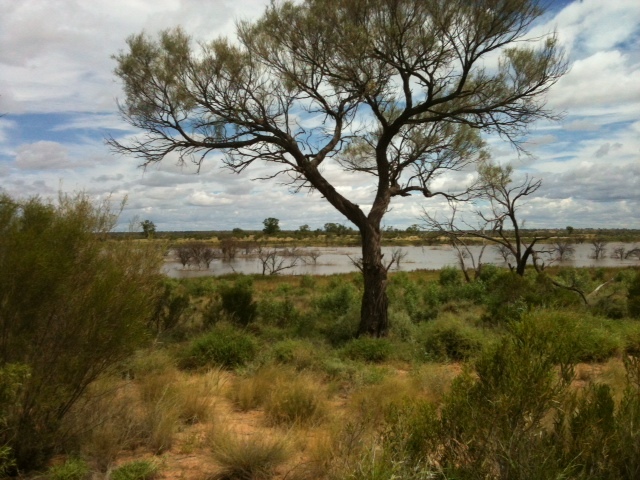 Plenty to do and miles to go today.

I'm heading into areas where it takes a light mist of rain to render the road impassable, so have packed a swag.

The influence that has half-drowned North Queensland is on the way.

It's showerey and overcast here (Cunnamulla). 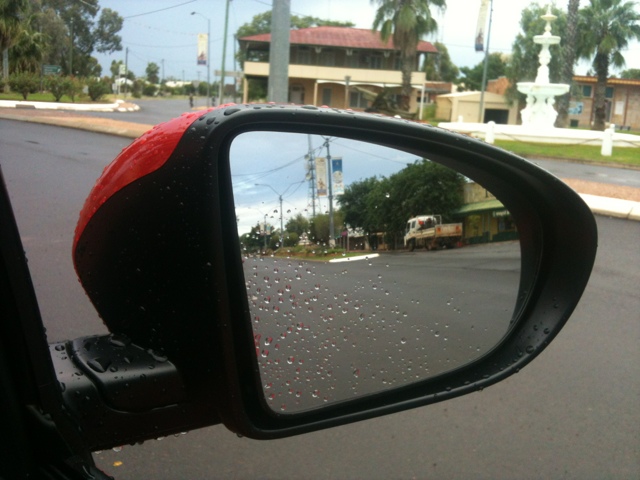 Most often I travel east-west but today it was north-south.

The drive from the lush cattle country around Augathella and Tambo into the hungrier and harsher scrub at the Charleville/Cunnamulla end was an exercise in contrasts.

The mining boom is extending its tentacles as far out as Cunnamulla. I don't know what they're looking for out this way, but I guess it must be CSG.

A tan colored Highway Patrol SS Commodore with gaudy stripes was gutter crawling around the pitch black streets tonight. It's rare to see the gendarmes outside the townships. I reckon there's a direct and measurable relationship between a police presence and the availability of fast food.

The sunset was worth capturing. 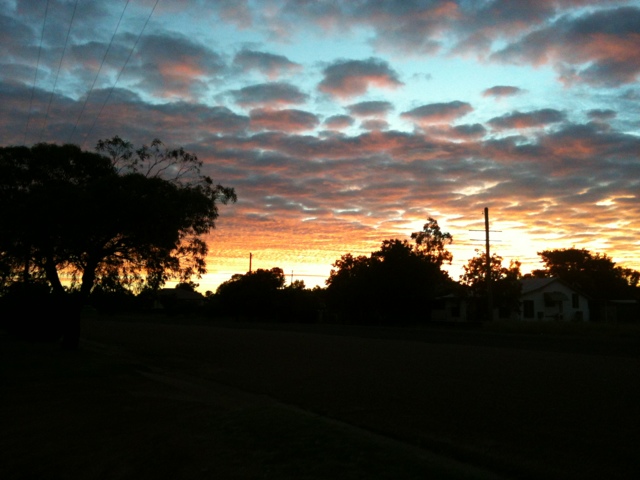 It's the most Northern centre on my list, and so far away from base that I can't get here more than once a term.
The locals are caught between two administrative centres (Roma and Longreach).
Some government agencies are sourced from one centre, and some from the other. It doesn't make much sense, but the locals accept it as part of living in some of the best country in Western Queensland.
In any case, as far as I'm concerned, Longreach should be the seat of Government in Queensland.
It's almost the geographical centre, after all.
I reckon the inhabitants of regional Queensland would get a much better deal if all the senior public servants (Director-Generals and the like) lived in Longreach. 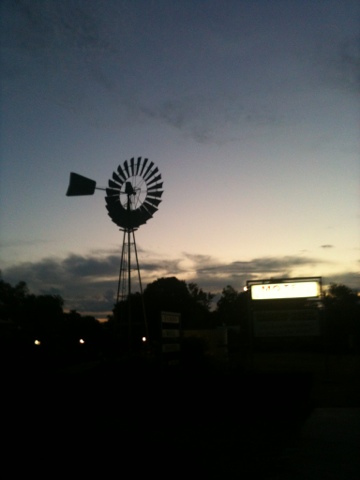 Our MX5 club took a 98 kilometre Sunday afternoon run around the back roads of Stanthorpe.

I thought it was worth sharing. Thanks to Matthew who mounted a camera on his NA.