One of the most entertaining aspects of my job is the unpredictable variety of the cars I get to drive.
The organisation I work for accesses a very large fleet of leased vehicles, which is in a constant state of flux. The fleet manager has to juggle usage so that at the end of the 24 month lease period, the kilometres travelled match, as closely as possible, the lease prediction.
I'm not sure what happens if this isn't managed properly, but I presume there is a financial penalty. Those of you who have salary packaged cars (as I did when I was working full time) will understand what I'm on about.
Because I cover more distance than just about anyone else in this region, I often get allocated vehicles which need to clock up lots of kilometres in a short time near the end of the lease period.
This happened last week when I was slotted into a Volkswagen Jetta Diesel to travel to St George, Roma and Injune.
This Jetta is the only one I've ever come across, and it was originally part of a salary package for a senior executive. This same head honcho became very ill, and had to relinquish the position, so the car was returned to the fleet to be put to economical use until its lease expired.
Because it was an executive's car, it was the top of the range version, with all the bells and whistles. By the time I'd covered the 1500 km which comprised the week's work, I'd just about sussed them out (the bells and whistles - I mean).
It is a very pleasant car, and being a diesel, very economical on such a journey. It used about 5 litres for every 100 kms, although cruising at 100kmh used less than that - about 4.7 lit/100km. This parsimony with the go-juice didn't come at the cost of performance. When called on to overtake the various grades of grain trucks, mining machinery and cattle crates that infest the Warrego highway, it responded with verve. It actually outperforms your average six (Holden or Falcon) in a typical overtaking manoeuvre because of the vast amount of torque available between 2000 and 3000 rpm. The super efficient DSG six-speed gearbox helps, as it masks the small amount of turbo lag that is occasionally evident.
It also cruises at 100kph with the diesel ghosting along at 2000rpm, which is the main reason for its low fuel consumption. Diesel may well be the way of the future, although it often costs a few cents per litre more than unleaded.
Strangely enough, diesel was actually cheaper than 91 RON at Roma, but this may have been an anomaly - it's always a few cents dearer in Toowoomba and Brisbane.
The fleet manager is a very grounded person (you'd have to be in her job) but she does tend to get a bit rattled when people misfuel the diesels. It happens fairly regularly.
Despite the fact that the cars are emblazoned with stickers shouting "diesel fuel only", some of the dozier members of the organisation entertain a belief that only 4WDs use diesel.
These are usually the same people who return vehicles with melted chocolate, chips and spilled coffee all over the interior. It drives me nuts.
Posted by 1735099 at 07:22 2 comments 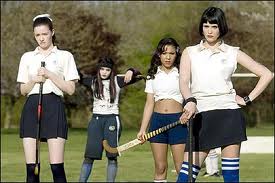 I don't know if any teachers read this blog - but those who do might enjoy the following -
A certain private school in Sydney's Eastern Suburbs was recently faced with an unusual problem.

A number of the girls were beginning to use lipstick and would put it on in the bathroom. That was fine, but after they put on their lipstick they would press their lips to the mirror leaving dozens of little lip prints.

Every night the maintenance man would remove them and the next day the girls would put them back. Finally the Principal decided that something had to be done. She called all the girls to the bathroom and met them there with the maintenance man. She explained that all these lip prints were causing a major problem for the custodian who had to clean the mirrors every night (you can just imagine the yawns from the little princesses).

To demonstrate how difficult it had been to clean the mirrors, she asked the maintenance man to show the girls how much effort was required.  He took out a long-handled squeegee, dipped it in the toilet bowl, and cleaned the mirror with it

The silence was broken by a large number of gasps, a few girls vomited and apparently someone fainted . Since then there have been no lip prints on the mirror.