Zen and the Art of Splitting Wood

It’s winter, and winter in the Garden City, means that from time to time, it gets bloody cold.

This is on account of the fact that the city in general, and the specifically the part of it that we live in, is perched on the edge of the escarpment, exposing us to the wind from the South-west and scudding low cloud which blocks the sun if it makes any attempt to warm us.

It works well enough to need no other form of heating in the house, as with the winter fan in motion, warm air is blown into the upper bedrooms. This seems to keep inhabitants of these bedrooms warm and content.

And that’s always a good thing.

Over the last ten winters I’ve learnt a thing or two about splitting wood. I started badly, buying an axe, inspired by memories of my father chopping (not splitting) wood for our cooking stove pre-mains electricity in the fifties.

Like me, my dad was a chalkie, so splitting wood was not necessarily his forte, although I remember him being proficient, not swearing much, and always making sure I was at least ricochet distance removed.

So I grew up with the idea that an axe was the appropriate tool. It’s not, of course, but it took me a few winters to wake up to that.

Once using a wood splitter, and understanding the nature of the wood, the task became much easier, and almost enjoyable.

I studied Taoism once, as part of Asian History and Religion, and the understanding that you work with the wood rather than against is in line with the Taoist view of things..

You look at the grain, and split accordingly. That way, little effort is necessary, and the results are predictable. It’s all about the Zen of the wood.

Unlike this clip, There’s nobody making admiring noises when I’m at the woodheap. 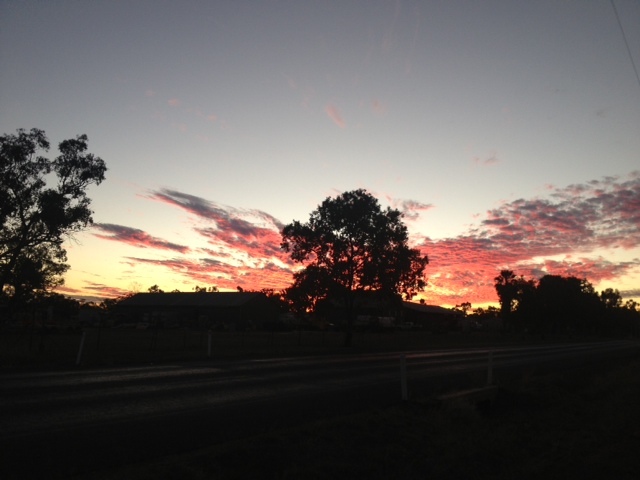 It's early evening in Charleville, the sun's dropping, and a damp chill is settling in.
We've had a front move through after a brief storm at Tambo yesterday, and it will be crisp tomorrow.

Charleville's a great base to work from to access Cunnamulla, Quilpie, Augathella and Tambo, and I seem to be spending a lot of time here lately.

I reckon I could live here, but would probably appreciate an alternative for a month or two at the height of summer. A donga by the sea at Carmilla beach would probably do the trick.

Wasn't that all the go at the height of the Raj?

Except that the alternatives were hill stations, and they came with Wallahs of all kinds. I'd not be comfortable with a Wallah, but someone to do the ironing would be good - not my bride - she deserves a break from that also.

It's been a good trip. Bush kids are inspirational, and they keep me on my toes.

I just wish these same toes (and other parts of my ageing anatomy) were better at keeping up with me. I'm finding getting down on the floor (essential with pre-schoolers) is not as easy as it used to be.

To be precise, it's the getting up again that's the problem.

We missed the transit of the F111 from Roma to Longreach yesterday. I'm buggered if I know how we managed that - it was 4 metres wide.

Dunno why they didn't fly it from Amberley to Darwin whilst it was still airworthy.