What bastard would park disabled? 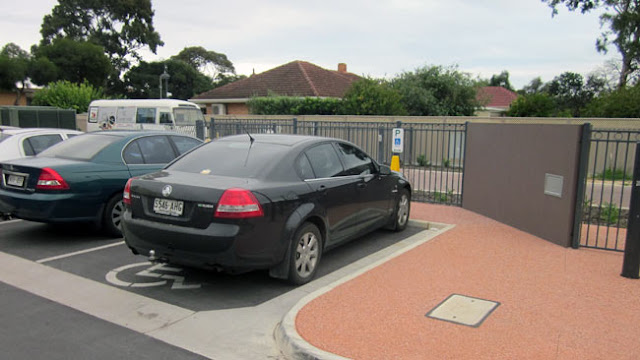 To answer the title's question - plenty, some of them genuine, some self-appointed.

This pic, from Carsguide, is illustrative, and notable because the perpetrator was an MP.

But that's not the reason I posted it. Take a close look at the pic, and get an understanding of how you'd manage to get out of the car illustrated if you were obliged to use a wheelchair.

If you park correctly (leaving equal spaces each side) I doubt that you would have enough room to manoeuvre a standard wheelchair from the vehicle and away from the car park to wherever you were headed. The kerb would get in the way.

Generally, people I know who are wheelchair bound and drive use two door cars. They store the chair folded behind the drivers seat so they can push it out the door, unfold it, and transfer from the driver's seat to the chair. This requires a careful sequencing of tasks, and considerable residual upper body strength and mobility, something that not all people with spinal injuries have. It has been made especially difficult because of the design of modern vehicles, with a substantial dip between the rocker panel and the vehicle floor.

In fact, as cars have become lower and smaller, fewer and fewer people have mastered the technique, but for those who have, about a metre of space is needed to actually get out of the car independently. I doubt that it would be possible in the situation above.

So the problem is not only able-bods using the designated spaces, it's also that they're badly-designed to start with.

Years ago, I worked with a young female teacher who was paraplegic as a consequence of a vehicle roll-over. She was a top teacher, and a very determined individual. She had retained good upper body strength (partly as a result of playing competition wheelchair basketball) and used the technique described above to get around independently.

She owned a Holden Monaro two-door (this was back in the eighties) and it was perfect for the purpose with a wide door and plenty of accessible space behind the driver's seat for the chair.

One day she nipped out at lunch time to post an important letter. Again, this was in the eighties before email. The bell rang for classes after lunch, but there was no sign of her. This was unusual, as she was very reliable, and I had never seen her late for anything.

Eventually, a good three quarters of an hour after class started (I had incorporated her class into mine) she returned. To say she was stroppy was an understatement. Steam was coming out of her ears.

She's parked in a designated space at the local shopping centre, wheeled herself to the post box and posted the letter. When she got back to the car, she saw that someone in something posh (I think she told me it was a Jag) had parked so close to her car on the driver's side, she couldn't get near it.

She wheeled up and down the row of shops trying to find the owner, without luck. Eventually he returned. Apparently she gave him a mouthfull. I'm sorry I missed that - would have been entertaining.

Anyway, the moral of the story is - not only do able-bodied bastards sometimes use designated parking spaces, sometimes they park so close that people with disabilities can't access their cars.

This is a fascinating piece of video of an interesting and unique aircraft.

The tail end of it shows the aircraft being piloted in by a guide driving a Pontiac (actually a left drive Commodore by another name and exported from Oz).

Landing is difficult - the wing must be stalled to get it down - not much room for error.

The media is full of Alan Jones’ non-apology.

His "apology" if anything reveals him as a silly obsessed old man. Obsessed with himself - that is.  Why does any journalist give this shrill old Queen the time of day?

They’ve forgotten his comments in 2000 called “outrageous and offensive” by the NSW Administrative Appeals Tribunal. It found that Jones had breached racial vilification provisions of the Anti-Discrimination Act when in April he made comments about an Equal Opportunity Tribunal award to an Aboriginal woman who had been discriminated against by a Dubbo real estate agent.

They’ve forgotten that he makes a living out of hate and vilification.

Perhaps they should close the loop and ignore him completely. This is standard treatment for an Id-obsessed child.

It would work with him, I’m sure.

This graphic from First Dog is brilliant. 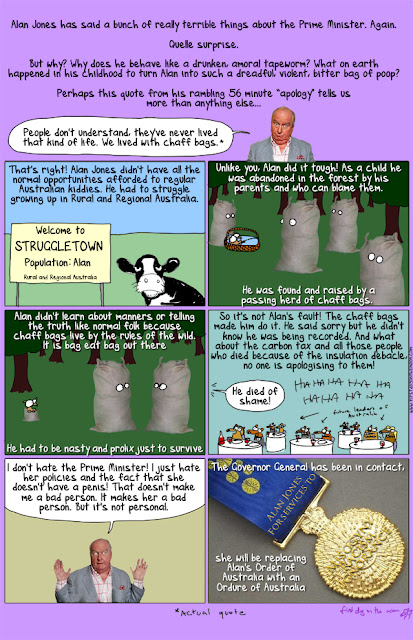 Update - This is timely.

Update - Even his own have dropped him.