Bolt is a Hypocrite (and a coward) 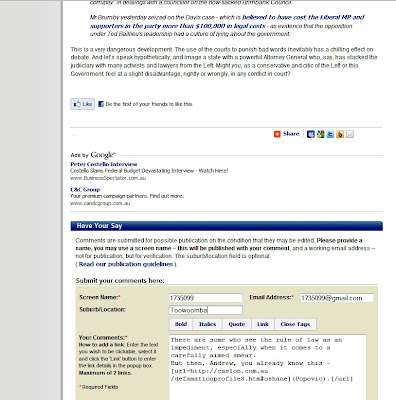 Bolt's contention is that it's "bullying" for a politician (or any public figure I guess) to resort to the courts.
In other words, the use of smear (at which Bolt is an expert, judging by the frequency that he uses this tactic on his blog) is OK if it's directed at a politician.
Bolt has form for smearing magistrates.
In 2002 Victorian Magistrate Jelena Popovic was awarded $246,000 plus costs in action against Bolt and News group over an article in the Melbourne Herald Sun.
I had the temerity to remind Bolt of this, but of course it doesn't paint him (or his newspaper) in a favourable light, so it wasn't published.
Put simply, he complains about free speech being restricted after being convicted of defamation, but then won't post a comment on his blog. I wonder how he defines "free speech".
And he's a coward, because he hides behind the power of a media conglomerate and feels threatened by a humble blogger. Obviously, he also has a strange definition of bullying.
(Click on the screen shot to enlarge it).
Posted by 1735099 at 09:50 3 comments 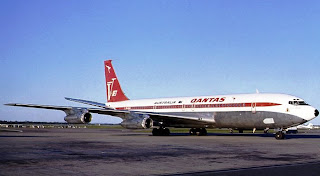 As part of some recent research, I was trying to gather as much information as possible about my RTA (Saigon-Sydney). There is a website - Skippy Squadron - which is a good source of detail.


I sent them an email giving the exact date, and the reply was very interesting. My memories of the flight  are generally positive. This may have had something to do with the fact that I was going home. I'm glad, however, that I wasn't aware of what was going on up at the pointy end. The trip would have not have been so enjoyable had I known.


I certainly remember a long take off run at Tan Son Nhut, and a very rough landing in , but there was a lot happening that I had no inkling about. Here is the account in its entirety -

Your flight was under the Command of a Captain Norm Field and from the only story from a pilot, he wrote:

Maybe some of the Blue Mountains Vets will remember this departure from Saigon as it was just before Christmas 1970 on December 10th1970 ,707-338c  VH-EAA City of Toowoomba.


According to "Murphy's Law" once a few things start going wrong get ready for a Bugger of a trip. The technical crew usually had a Vietnam Charter latched on to their normal pattern so we arrived in Singapore at the end of a London trip and departed 24 hours later with 165 very quiet troops on board. Only a short 1hour 50 minute flight from the old airport ( , virtually in the city) to Saigon with most of the blokes on board wishing we could divert to . We also tankered fuel to save time and cost of the uplift, on the turn around in , up to almost max landing weight. No problems at this stage with a great view of the city as we were vectored out to the coast for out initial approach and then turned inbound to see a low level C130 probably on a spraying run. We had developed a coward's approach in the landing profile - maintain 5000 feet - for as long as possible which put you way above the glide slope but not a big problem in the 707 as you could achieve a 1000foot per mile rate of descent with full flap and the gear down provided you remembered to be back in the slot by 3 miles from the runway. This saved itinerate bullet holes in the aircraft.
The airport was a shambles with military equipment, broken helicopters and Air aircraft scattered aimlessly and people wandering in and out of the flight lines. However our blokes de-planed straight into waiting busses and their equipment followed in the trucks. It was super efficient.

Then "Murphy" took over. Our flight plan arrived and with the high ground temp and big payload (a bum on every seat) we could not do the direct flight, so plan via 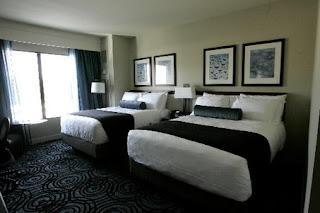 On Monday and Tuesday I stayed in a big city hotel in Brisbane. This was necessary because I was being offsider to my wife who was attending a couple of conferences.
I'm more often on the road lodging in bush motels than their metropolitan counterparts, so the contrasts are interesting.
One of the most obvious differences is that the city hotels (in Brisbane at least) are almost completely staffed by Asians, with the exception of the desk staff. In other words, the cleaners, kitchen hands and waiters and waitresses are Asian.
Generally, they are courteous, efficient and obliging. There was one small exception to this, when I asked for a pot of Fourex and got a pint. Pints are unheard of in the bush. This bloke must have spent some time in the UK. I drank it anyway. He called me "sir",  and when I responded by saying my knighthood hadn't yet arrived, he looked confused.

I began to consider the reason for this lack of locals. Is it because Australians won't take these jobs? Maybe the Asian staff are simply better in terms of their work ethic? Perhaps it's simply management policy?
I did some research. The hotel is owned by a Philipino consortium. The staff are on contract to other Philipino companies who recruit back home. There are also family connections. The reason that no locals are employed is simply that all this activity takes place overseas. The jobs are not advertised in Australia. It's simply a closed shop. Whilst the staff were forthcoming about all of this information, not one of them was prepared to disclose wage rates.
This is obviously unsatisfactory. Not only are these people being exploited, opportunities for locals are denied. I'm surprised that the management can get away with it.
Maybe we should take a leaf out of the Vietnamese experience. The big city hotels I've stayed at in Vietnam are staffed by locals. This may have something to do with the fact that no foreign company can own outright any enterprise in Vietnam. By law, there must be majority local ownership.
We're told in the media (especially the Australian) that Unions are evil because they encourage closed shop situations. Yet it's apparently OK for our resources (especially our employment opportunities) to be sold off overseas.
It's OK - of course, because free enterprise is sacred. It's free to those who own and control it. Everyone else can get stuffed.