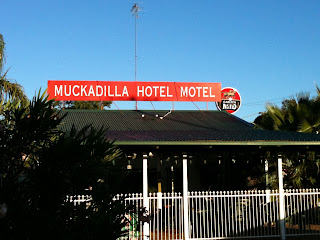 For those who visit this blog (and looking at my stats there are a few) - apologies for the lack of posts since May 8.

There are two reasons (excuses?) for this. One is that the blogger website has been down - the other is that I've been at Muckadilla.

This came about (my sojourn at Muckadilla - that is) because I foolishly left it too late to book accommodation in Roma. Until about twelve months ago, i could book a week ahead. Not any more. A month might cut it.

This is basically because the mining companies block book the motels in Roma for their crews. You can tell when you drive past by the conglomerations of work trucks parked outside on the road because they're too big to be parked inside.

This left me to find somewhere to stay close to Roma, where most of my work was last week. Wallumbilla is 40 kms East, but all pubs and Caravan Parks were also booked out there. Muckadilla (40kms to the West on the road to Mitchell) was all that was available, so that's where I ended up.

It was OK, given the building I stayed in went up in 1961, and had air-conditioning but no heating to speak of. There was a plug-in heater fan device, but given the cold snap (zero on my last morning) it was barely adequate. I soon woke up to the fact that the room could be kept warm enough if the bathroom door was closed, but the first trip to the bathroom in the morning resembled walking into a freezer. The bathroom had permanently open ventilation windows. 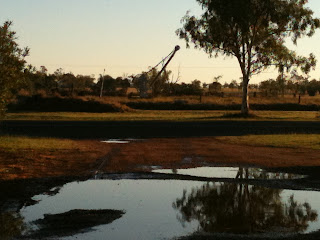 The publican and his offsider were the only staff, so they had to work their butts off. On my second day, the offsider got a migraine, so the publican ran the whole show single-handed until she recovered.

He told me over breakfast on the second day that they used to rely on employing backpackers, but they have been notorious by their absence since the publicity about the Queensland floods. Seems that a message has gone out in backpacker land which says that most of the state is still underwater.

The township owes its existence to an artesian bore that had medicinal qualities. It petered out eventually.

Locals from Roma used to head out to take the waters and the pub and other infrastructure followed. Not long after the bore ran out, the pub burnt down. There may well have been a connection between these two events. It was rebuilt bigger and better in the sixties.

I reckon the place would have made an ideal place for Osama Bin Laden to hide out. 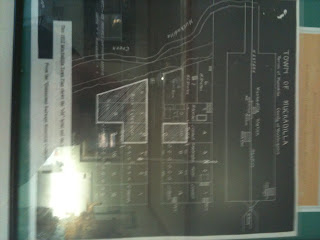 No body (not even the CIA) would  have thought of looking for him there. Pic (right) shows a map. Note the eerie resemblance between the actual compound in Abbottabad and this one.
Posted by 1735099 at 14:22 3 comments 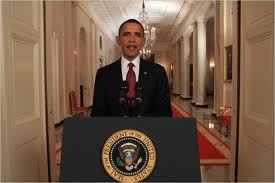 These two names are distinguished only by the substitution of two letters "b" and "s ".

Given the amount of bullshit created by this event, it's somehow appropriate.

First of all, we have the "controversy" generated by the non-release of the photos of his corpse. The Right in the USA find it hard to accept that the Obama administration has actually succeeded in killing OBL, so they're trawling to develop a critical meme.

The non-release of the pics, and the varying stories about the detail of the raid is the best they can do - so they're obviously pretty desperate. Bolt's reaction is a good example of sour grapes.

There are plenty of people out there who believe that the moon landings never took place, despite the plethora of videos and photos available, so the release of some grainy shots won't keep them happy. On the other hand, why should the Yanks emulate the behaviour of the lunatic Islamic fringe by posting gruesome images, unless it be to inflame them further?

There has been a fair bit of misquoting of words from Martin Luther King about rejoicing in some one's death  (even some one as vile as OBL).

What King said from "A Testament of Hope: The Essential Writings and Speeches of Martin Luther Kiing Jr" - is:

He’s absolutely correct, of course, and a gung-ho militaristic reaction (rather than a measured response) to asymmetric warfare is what sustains terrorism.

The current US administration has managed this situation well, in not releasing the photos – unnecessary now that Al Qaida has acknowledged his death – but they stuffed up somewhat in relation to the release of information about the raid. It reminds me eerily of “children overboard”, in that the great efforts of the military get twisted by the political spin machine.

Having said that, Obama had the guts to authorise the mission. Given the history of Carter’s debacle in Iran, that can’t have been easy. The Right’s assertion that he’s weak when it comes to military action now looks pretty lame.

The reaction of the Ratbag Right (here and in the USA) is funny. Obama's success where GWB failed has them in knots. Hence the bullshit referred to above.