That will be after my next big trip – Charleville, Cunnamulla, Tambo etc. Usually after a week like this I’m in recovery mode and do very little of substance on the Saturday following, but I will have to do my civic duty and vote.

This means I need to follow a time-honored three stage process to determine my choice of candidate in each house. Contrary to what is presented in the MSM, I don’t get to vote for Tony Abbott or Kevin Rudd.

The three steps in this process are –

The trouble is, given recent history (particularly as it refers to the Queensland state poll held in March last year); the published party policies can have absolutely no bearing on the conduct of the newly elected government.

The LNP completely ignored their promises after that election, and we saw mass sackings of public servants, withdrawal of essential services to the most vulnerable sections of the community, and school closures, none of which had been flagged before the election.

In addition, the two major parties, on one important issue (asylum seekers), have adopted an institutionally brutal policy that I find abhorrent, and that I couldn’t support even if threatened with torture (such as being forced to watch another leaders’ debate).

So my time honored process is no longer relevant.

This time, I’ve gone to Auntie (the ABC) for guidance.

They have this carefully researched programe on-line. It was developed jointly by their election Guru (Antony Green) and the Universities of Sydney and Melbourne.

It’s called Vote Compass. Try it – you might be surprised.

It puts you through a series of questions, and figures out where your party affiliations lie. I reckon it’s about right in my case.
Posted by 1735099 at 08:02 5 comments 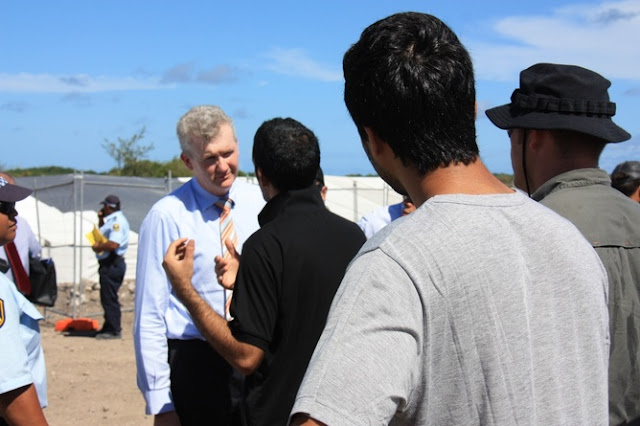 When you're working with kids with disabilities who are confronted with major barriers to learning, as a teacher, you learn pretty quickly to "try another way".

If you don't, you are unlikely to be successful, and won't last very long in the field.

It's interesting then, to read this piece, which is essentially an outline of another way of dealing with asylum seekers.

I'm posting it, because it is a refreshing alternative to the rubbish which has colonized the MSM on the issue.

The other reason is that the "other way" is something I suggested in a post back on December 1st 2012.

My words back then -


If however, you believe this trickle of “boat people” is a problem, how about considering a real solution to this non-problem?

Compare what I suggested back then with what is suggested in this article by Julian Burnside.

I swear he's been reading this blog...


The major political parties in Australia are engaged in a competition to outdo each other in their promises to mistreat boat people. The theory is that this will deter others from seeking protection here.
Promising to treat innocent people badly is not usually a vote-winner. In most cases it would be seen as a mark of depravity.
But the argument starts at the wrong place. It starts with the Coalition’s oft-repeated statement that boat people are “illegals”. It starts from the language of "border protection"and "queue jumping": language calculated to make the public think boat people are undesirables, people to be feared, people we need to be protected from.
The fact is that boat people do not break any law by coming here the way they do. Over the past 15 years, 90%of them have ultimately been assessed as refugees entitled to our protection. Their arrival rate over the last 12 months has been much higher than the historic average, but even now it represents only four weeks’ ordinary population growth. While an estimated 25000 boat people arrived in Australia in the past 12 months, we received 168685 new permanent migrants and over six million visitors came to our shores in the year ended December 2012. Boat people do not present a demographic problem for Australia.
Spooked by tabloid scare-mongering, both major parties have chosen deterrent policies; treat them harshly, push them off to small, impoverished Pacific neighbors. The low point of this is the recent Coalition promise to bring in the military to deal with the “emergency”.
The spectacular cost of these measures passes without complaint because it is seen as a kind of protection. While it is difficult to separate out the various components of the cost, indefinite detention costs around A$110,000per person as of 2011-12. The actual cost varies: metropolitan detention is cheapest. It gets more and more expensive ass the place of detention is more remote. On current estimates, we will spend about$2.9 billion each year.


So, how better to deal with them?

First, it is essential for a political leader to show some actual leadership by explaining the facts: boat people are not “illegals”; they are almost always found to be refugees; we deliberately, consciously mistreat them for political purposes; it costs us a fortune to treat them this way.
I do not advocate an open borders policy. Initial detention for people who arrive without papers is reasonable. But it should be limited to one month, for preliminary health and security checks. After that, release them on interim visas with conditions which allow them to work or study and access to Centrelink and Medicare benefits. But require them to live in specified rural or regional towns until their refugee status has been determined.
There are plenty of country towns which are slowly shrinking as people leave. Given that AgForce Queensland, a leading industry body, estimates that there are an estimated 96000 unfilled full time agricultural jobs in country areas, the likelihood is that many asylum seekers would get jobs. But even if all of the asylum seekers who were required to live in country towns stayed on Centrelink benefits, they would spend those benefits on rent, food and clothing, to the benefit of the economy of the town where they lived.
If this approach were adopted, and if every asylum seeker remained on benefits, it would cost about $30,000 per person per year, making a generous allowance for administrative overheads.
That approach would liberate a couple of billion dollars a year which is presently being spent on detention and the various Pacific solutions. A billion dollars a year could be turned to creating more public housing for homeless Australians; the other billion dollars a year could be applied to building schools or hospitals or other infrastructure projects, or used to reduce the deficit or reverse tertiary education budget cuts.
If infrastructure projects were thought of as desirable, it should not be difficult to provide jobs to asylum seekers whose refugee status was still being assessed: a kind of national service coupled with work for the dole. Provided the employment conditions were fair, it is highly likely that asylum seekers would be glad of the work.
There are many ways these ideas could be implemented. A few billion dollars a year can be used to damage asylum seekers profoundly, or it can be used for the benefit of the community in which asylum seekers live pending refugee status determination. But it won’t happen until someone shows enough leadership that we are behaving badly because we have been misled about the character of the people who wash up on our shores.