It's been a tough week for folk living in Mitchell, Roma and St George.
I had been scheduled to do a sweep through Roma and St George this week, and then to head West to Charleville. Very little of this has been possible. The best I could do was to work out of Roma for a day or two. the motel I'd been originally booked into still has all its furniture in the street waiting to be dumped.

For me, this is a planning inconvenience. For many of the people with whom I've worked for the last five years in these areas, these floods are life-changing.

Mitchell was always a pretty little township on the way to Charleville, although I haven't worked in either of the schools there for quite a few years. The best pies in the South West were available in the Mitchell Bakery.
Not any more. The bakery is a stinking mess. The insurance isn't paying, and damage (as far as it can be calculated) is over $400000. The owner (it's a family business) is talking about walking away.
The water came up so fast that many people in Mitchell were lucky to get out with their lives. Three quarters of the houses in town were inundated. Most of the main street went under, and the only place you can get a feed in town at the moment is at the one pub that stayed dry.


About the same number of homes were flooded in Roma as Mitchell, but Roma's a much bigger town, and there were large areas dry, so immediate help was at hand. In that sense, Roma was slightly better off, but they still copped it. One woman (whom I had met through my work) was drowned here when her vehicle was washed off a causeway. This has hit the place hard, as in a town this size; everybody knew her and her family.
The rain was unprecedented this far west. The influence that caused it had all the characteristics of a coastal low - but it lingered three hundred Kms west of where these things are usually found. It stayed for days, and the countryside, already waterlogged after three major wets in a row, couldn’t absorb the volume of water.
The rivers run north-south, and the Maranoa, the Warrego and the Balonne, all combine and eventually flow into the Darling. Every town on each watercourse (Mitchell on the Maranoa, Charleville and Cunnamulla on the Warrego, and St George on the Balonne), was threatened.

Through history these rivers have shaped these townships, and in this flood, almost destroyed them. Charleville’s levy saved it with centimetres to spare, and two thousand St George residents were compulsorily evacuated, with the Balonne topping out today – almost a week after the rain event, with practically no margin of safety. It looks as if people will be allowed back in tomorrow.

Dirranbandi (also on the Balonne) has a good levy, but it looks like it will be isolated for at least two weeks. I won’t be going to Thargomindah. It’s accessible only from South Australia, and likely to be cut off for a month.
Many people on properties will be stuck for months. They generally plan for this, and are, as a rule, happy to put up with the inconvenience with the knowledge that there will be good feed around for a while. Cotton farmers aren’t so sanguine, as their crop is ruined if it rains at the wrong time. I’ve heard, however, that much of the cotton had been harvested.
So know the cleanup begins. 6RAR were trucked into Mitchell today and are already hard at work. They’ll move on to Roma, once they’ve done with Mitchell.
Everything out this way happens on a large scale – droughts, floods and generosity. Despite everything that’s happened in the last week or two, I wouldn’t work anywhere else.

In time, the Blackhawks will leave, 6RAR will return to Enoggera, and you will be able to buy pies at Mitchell. It takes more than a flood or two to set these people back.
Posted by 1735099 at 19:12 0 comments 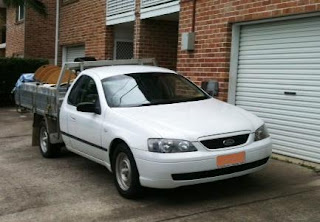 My kids are always shifting house.
Sometimes I think that it’s just a ritual demonstration of continuing dependency. Whatever – possession of a Ute is a powerful advantage when it comes to shifting.
I don’t, of course (own a Ute – that is). When I was making decisions about what form of transport I’d require for retirement, I thought leisure and pleasure, not shifting sprogs.
A roadster is not terribly useful at times like these.
So, there have been a number of occasions when I’ve needed a Ute. Once or twice, I hired a Japanese one-tonner (Toyota Hi-Ace or some such). Each time it did the job, but didn’t feel right.
The steering was numb, the ride woeful (especially when empty) and it always seemed to be working hard. It also had a fly-off handbrake.
Now fly-off handbrakes were invented by the Brits. They are one of the few things the Brits invented that the Japanese didn’t improve.
In fact, they made the stupid things worse – if that’s possible.
My brother-in-law has a BA Falcon Ute (pictured). He bought it at a government auction. The BA is familiar territory to me, having owned (or rather leased) an SR version a few years ago. I’ve since disposed of it, but the memory (fond) lingers.
BIL’s Ute pulls like a train, is comfortable, comes free (although I always return it with a full tank of juice, and a bottle of plonk), and is comfortable and easy to drive.
It doesn’t have a fly-off handbrake.
Now if I can persuade one of said sprogs to buy a Ute, I could, in a manner of speaking, have my cake and eat it too.
Posted by 1735099 at 16:53 0 comments