The asylum seeker debate continues. It has gone, since the days of the Tampa, from election eve opportunism through cynical political manipulation to outright national tragedy.

It is not the trickle of barely seaworthy fishing vessels and their desperate human cargo that poses a threat to Australia. It is the rank dissembling, crocodile tears and dog whistle bigotry that presents far more danger to our social fabric.

Remember how getting tough was going to solve the problem?

Now that the differences between Labor and Coalition policy are almost indistinguishable, it’s clear that getting tough has made no difference at all.

Two facts are indisputable. The first is that no amount of “getting tough” is going to “stop the boats”. The second is that the costs (both human and financial) are not worth the benefit.

Banging these people up on Nauru and Manus has made no difference. The cost of running these gulags is astronomical.

As Burnside points out, the projected costs of Nauru and Manus ($15 billion) would cancel all HECS debt.

How do you feel about that, uni students and recent graduates?

Staying with the costs of it all, keeping refugees onshore costs between $150000 and $350000 per year per refugee. Releasing them into the community, even if they went on the dole, would cost between $10 and $20 thousand per year.

Are you happy about your tax dollar being used to slowly send people insane whilst it’s costing you so much?

Then there’s the issue of how our political leaders use the issue to garner support. It’s a simple three step process.

First, you demonise them. This is achieved by the use of language. Calling them “illegals” is one strategy, followed most recently by Tony Abbott.

SEEKING ASYLUM IS NOT ILLEGAL.

Sorry about the shouting, but sometimes I despair that this simple fact will, by some, never be acknowledged.

Then you construct a narrative. The one most favoured by the Coalition is the macho “we decide” story popularised by John Howard.

Labor use that one, but also demonise the people smugglers. They also use the compassionate “we will stop the drownings” meme. The logical weirdness of this one is clear. Protecting people from a danger already past is bizarre. By definition, they’re not in danger until they get on the boats. They’re still getting on the boats. No matter how tough you get, they will continue to get on the boats.

After all, if you’re a Hazara, and certain death in Afghanistan is weighed up against a risky boat journey with detention at the end is the choice, you’ll opt for the boat every time.

The last dodgy narrative is about queues. Excuse me whilst I shout –

THERE IS NO QUEUE.

As Burnside eloquently points out, if you were a Hazara in Kabul trying to find this fabled “queue”, you’d have a few problems.

The first one is that the location of the Australian embassy in Kabul is a secret for security reasons. Check the DFAT website…

Actually, I was wrong with my three steps narrative. There’s a fourth – “they’re not genuine refugees”.

Paul Syvret sums it up pretty well. It has nothing to do with compassion, border security or “no advantage”.

It’s all about the lowest and grubbiest form of politics. It makes me ashamed to call myself Australian.

Okay, now that I’ve got that off my chest – what’s the solution?

Before you have a solution, you need a problem. I don’t believe we have one. Compared to many other countries the flow of refugees to our shores is infinitesimal.

As Burnside points out, all the arrivals so far this year would equal two weeks worth of our national population increase due to the birth rate.

If however, you believe this trickle of “boat people” is a problem, how about considering a real solution to this non-problem?

I've seen first hand what the injection of the work ethic and enthusiasm exhibited by Vietnamese kids has done to schools in Charleville. Afghan kids would be no different.

Don’t tell me this designation of zones and carrying ID is an infringement of human rights, and locking them up in offshore gulags isn’t.

Afghans in particular make great rural workers. It’s been done, and it works. It works with Vietnamese also, as my own observed experience in Charleville has shown. There's talk about establishing an abattoir in the north to help solve real problems in the live meat export trade. One solution to two problems, perhaps?

Long-term, make collaboration with Indonesia and Malaysia an urgent priority. Move heaven and earth to come up with a cooperative agreement that makes their approach and our approach indistinguishable. The successful model provided by the Vietnamese boat people is worth looking at.

This may involve anointing a high profile ex-politician to do some shuttling between Oz and our Northern neighbours for a year or two. Maybe Phillip Ruddock would be the man? Or perhaps Alexander Downer?

The novelty would be our national leaders putting humanity before politics.

Will we ever see it?


The old enmities are emerging.

Newman is having trouble paying off all the favours he owes.

When you consider that the LNP is a bit like the Monkees in that it was a product of a marketing strategy rather than political conviction, none of this is surprising.

Queensland has always been good value when it comes to political spectacle. 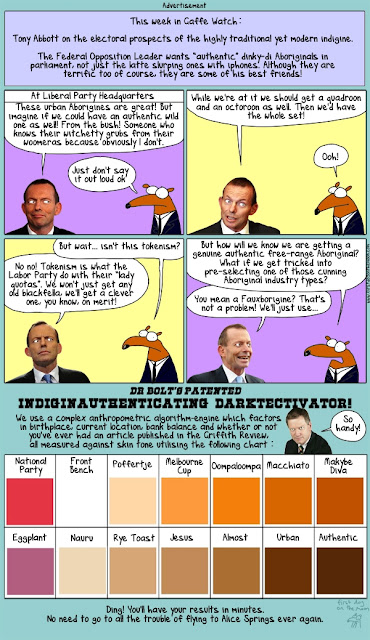 First Dog has a particularly pithy view of authenticity when it comes to aboriginality.