Sadly perhaps, I’m disposing of a vehicle known as a sports car.

That’s interesting, because the old understanding of the term makes most think of a two-seater, a convertible, something that is fast, handles well, and is fun to drive.

This understanding persists, despite the best efforts of those marketing faux four wheel drives (now called SUVs). I’m not sure where the “S” comes from.

Most of these things are not fast, don’t handle well, and are boring to drive. I know. I drive them all the time at work.

They are, however, easy to get in and out of.

I’d argue that my Commodore Ute could also be called a “sports car”.

Let’s compare it with the Mazda. Both have front engines, and rear wheel drive. Both have rack and pinion steering. Both are two seaters. Both have a flexible and removable cover.

There is one significant difference. The Mazda has a sweet 6 speed manual gearbox. I could have bought a Ute with a six-speed manual, but I tried one, and the gear shift was clunky. I figured the automatic, whilst a little boring, was a better option. Besides unless you buy new, most manuals have been driven by gilded youths who flog the bejesus out of them.

Anyway, that’s my story and I’m sticking to it.

Significantly, you can’t help your kids shift house in a roadster.

I share his exasperation. Talk about the bleeding obvious. Although in this context, the pun is probably offensive....

Update - This very sane piece in the Washington Post puts access to firarms in perspective. This critical factor is what makes the US different from comparative societies.
Posted by 1735099 at 06:40 0 comments 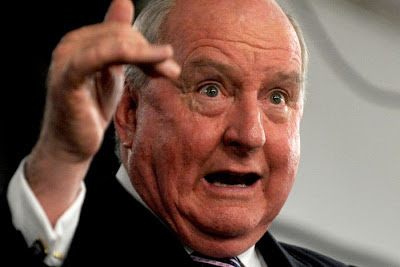 It took a while in coming, but the Parrot's chickens have finally come home to roost.

The Road to Hell

It's so sad, so predictable, and so American. Violence is as American as apple pie.

But a comment on a blog has forced me into it. Someone is seriously and earnestly advocating arming teachers as a solution to the problem of school massacres.

Admittedly, this suggestion was made by someone living across the Pacific. I'd hope no Australian would have such a tenuous grip on reality to promote it.

Can you imagine it? A school full of armed teachers? Armed with what? Glocks, perhaps, or Brownings?

I can see it now. Range practice after school - annual skill and safety checks - the establishment of secure school armouries. The janitor groundsman could double as the school armourer. There'd be an issue of ammo every morning on parade. All weapons would have to be cleared and handed in at day's end.

The arms industry would make (excuse the pun) a killing. The contracts would be lucrative and attractive.

Murphy's Law would hold, of course. Imagine what could go wrong. Teacher carelessly mislays his/her weapon - it gets picked up by one of the school's more crazy students. Don't laugh - there's a constant percentage of psychopaths in every school. You'd only need one.

Or perhaps there's a break-in at the armoury. Twenty or so Brownings (or Glocks) are let loose in the criminal community.

Or perhaps a teacher finally succumbs to the many pressures of the job and barricades himself/herself in a classroom holding twenty-five kids hostage.

If it can happen, it will happen.

The fact that this lunacy could even be considered is a pretty clear indication of the problem stateside. Gun violence is so embedded in their culture that it's seen as a solution rather than a problem.

It takes a particular kind of delusional view of the world to come up with this train of thought.

I give it a week or two until they come up with a new solution.

I can hear it now. Lower the age of conceal carry to five.

That way the grade oners can look after themselves.

Bizarre? Don't bet on it.

We are talking about the NRA, after all.

And the tragedy itself?

I find it profoundly unsettling to think about what the children and staff at that school have been through. It has triggered memories I’d rather forget. On three occasions in my over 40 years in schools, firearms as a threat were in the picture.

Twice the threats were verbal, but on one occasion there was a real physical threat. A father came to the school with a rifle in his car. I managed it by sitting down when the perpetrator came into my office. It seemed a better idea than standing up. I was unable to get him to take a seat, but eventually he ran out of grief and left.

I say “ran out of grief”, because it was grief that was driving his rage.

He came back next day and apologised. I didn’t contact the police. Perhaps I should have. The weapon was legal.

It did give me an insight into the feeling of sheer helplessness you experience when you’re placed in the position of being responsible for the safety of a group of children, but lack any means to do anything about it.

But arming teachers is not the solution. It would be a short cut to hell.