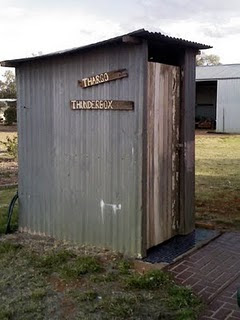 These buildings are about the same age.
Both are entirely functional.
One has more aesthetic appeal. 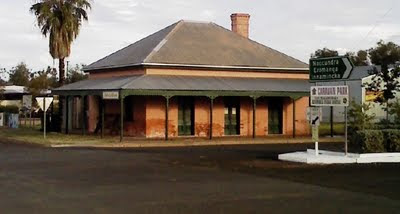 The Perils of Pauline 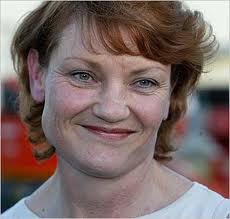 Sometimes I think Pauline Hanson is a figment of my imagination.
The scrapes she gets herself into give the appearance of being created by a failed scriptwriter. The latest alleged voting fraud is a good example.
In this latest case, however, she’s the victim of a scam.
Apparently the Sean Castle character who wound her up belongs to the HS Chapman society, a group that believes that electoral rorting is widespread. They have links to the Australians for a Constitutional Monarchy.
His motives are unknown, but it is clearly possible that he set up Pauline to prove a point – that the electoral system is open to fraud.
This bloke works as a teaching coordinator at a “Christian” school. I wonder what he regards as “Christian” values. What part of fraud is Christian?
And the taxpayer has to foot the legal bill? If there is any justice, Mr Castle should be invoiced – or perhaps the taxpayer funded school that employs him.
Even stranger, he perpetrates a fraud to expose an alleged fraud.
How Christian is that?
Posted by 1735099 at 08:12 0 comments

When Work is Fun

This week’s trip was my last this term. It was bloody cold when I left at 6am.

This was short a one, out to Roma via Wandoan. This run takes in some of the best grazing country in the state, behind Wandoan.
It’s also of historical significance relating to bushrangers, but I will wait for a later post to talk about that.
The country is beginning to brown off and look more like it usually does, but the growth is lush. We could be in for interesting times with fires come September.
At the half year mark in the schools there are often lots of staff changes, and this year is no different. There is a massive turnover of young teachers in this part of the world. It has nothing to do with the stress of the work (although for some that is a factor). Rather, it’s a consequence of the transfer system which entitles teaching staff to a favourable transfer (usually to the coast) after a few years western service.
Despite the high turnover, it’s a good scheme. Without it, these schools would simply not be staffed.
The calls we hear for allowing principals the right to hire and fire ignore this complexity. As an ex-principal I can understand the advantages of school-based recruiting, but the problem of staffing bush schools will have to be addressed and some compensatory measure applied before it would work out here.
How about a special rural teachers’ award with higher salaries and opportunities for additional professional development?
All the talk out this way is about the Queensland government’s imitative to bring year seven kids into secondary. This had to happen to bring Queensland into line with the rest of the country, but it will have difficult consequences for the small schools and the families of the kids who attend them.
I went to a farewell dinner for one top young teacher on Tuesday night at a local pub. It was a great night, although I was the only one in the room over sixty – actually I was the only one over forty.
This particular young teacher wasn’t heading off to greener pastures. She and her hubby are about to have their first child. Again, it’s a sign of the times that she is moving to Brisbane next week for the birth. The west is slowly being stripped of vital human services.
She’s a talented and effective teacher and I hope she returns to work after bub. She is rare in that she comes from a property near Blackall, and her hubby has a job in Roma, so she will stay in this part of the world.
On the way back I did some work in a three teacher school. Standing proud in the school grounds is a new library built with BER funding.
Like all these buildings, it is air-conditioned, wheelchair accessible, and built to a very high standard. There is no way this facility (which is used by the local community as well as the school kids) would have been built under a conservative government.
Irrespective of the carping of the federal opposition, every school in the country will benefit from this initiative for decades. It makes me smile whenever I read the whingeing and moaning about the BER from the likes of Blot and Blair..
These buildings are a symbol of a value which is simply not understood by those on the Right. It's about inclusion - making sure that every kid can access all parts of the school, and that no matter where you live, you are schooled in a high quality building.
The Right seem to believe that you only deserve to get access to a quality school library building if you live in the city and your parents have a high income.
They need to get out more.
Posted by 1735099 at 09:09 0 comments


Putting up with cold weather in Toowoomba is nothing new or unusual.

This winter, however is a bit strange. Mostly, you get about three days of westerlies ( lazy winds which can't be bothered blowing around and instead blow right through), but we've been freezing for a fortnight. 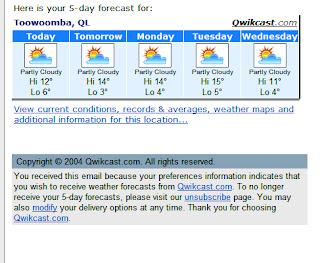 Toowoomba is always five degrees cooler than Brisbane, but during the last few weeks it's been closer to ten.

Even when the sun is shining, the south-westerlies are still blowing.

One of my sons lives in Adelaide, and I've always regarded it as a cold hole in winter.

For the last fortnight, Adelaide has been about three degrees warmer (minimums) than here.

The only antidote is to light the fire. Unfortunately, I'm the only one in the household that has mastered this basic skill (splitting wood) so when I head west as I am tomorrow, I have to split a wheelbarrow full to tide the rest of the family through whilst I'm away.

I can't complain. The motels I stay in have reverse-cycle air conditioning.

I'm not looking forward to heading towards Wandoan tomorrow at 6am.

The minimum forecast for tomorrow is zero. Looks like it will be the old warm water on the windscreen trick.
Posted by 1735099 at 20:19 3 comments

This news item is a brief mention of steps towards a long-overdue cleanup.
It’s about forty years overdue, but I guess it’s better forty years late than never. At last the Yanks and the Vietnamese are in constructive dialogue about this and other issues.
I remember being sprayed with something whilst patrolling in a rifle platoon in Vietnam all those years ago.

I also remember my toenails falling off after using a herbicide on areas around Nui Dat in August 1970, although I think that stuff was Agent White.
I remember the stillbirth of our first child as a consequence of a congenital defect. To this day we don’t know the cause of this defect, but it’s not hard to assume some sort of connection to exposure to chemicals after reading the Vietnam Veterans’ Morbidity study. Our daughter would be 29 had she survived.
I remember travelling to Vietnam in 2007 and seeing bare areas and great swathes of vegetation around Da Nang grotesquely deformed as a consequence of herbicides sprayed to provide security for the big American Base that used to be there.
I remember we were travelling in a Vietnam Airlines ATR 72 (with a wing mounted above the fuselage giving excellent views) which had to be rerouted because of fog at our destination in Hanoi.

I remember this meant that we had two take-offs and two landings during which we could observe the surroundings of the old base, covered as they were with weirdly-deformed vegetation.
I remember that it was as clear as a bell at Da Nang. We got a very good look at it.
I remember two profound stuff-ups perpetrated by the CIA in Vietnam.. They were the Phoenix Programme and Operation Ranch Hand. It's interesting to read the concluding sentences of a review of Phoenix written in 2005 by Lieutenant Colonel Ken Tovo of the US Army.
He writes -
America must maintain moral ascendency over its opponents and never lose sight of its democratic principles.


I remember that both these CIA programmes were disasters caused by the loss of the democratic values cited above. The effects of the second one are visited on the lives of both Vietnamese and Vietnam veterans to this day.
I remember.
Posted by 1735099 at 15:19 0 comments

This piece from today’s Catholic Leader paints a dismal picture of conditions in one of our detention centres (at Scherger, FNQ).
An extract –
"I had visited another detention centre in Adelaide during the Vietnam War, but I was not prepared for the (6m) double row of wire surrounding the camp, the desolation and isolation of the centre in the Weipa red-dirt bush, the lack of beauty, water, flowers, scenery, civilisation, comfort, home of any kind," Fr Bissett said of his recent visit.
Fr Bissett, who is administrator of the Sacred Heart Mission Parish in the Torres Strait, visits Weipa about once a month and had been asked to celebrate Mass and provide Reconciliation at Scherger for Catholic Sri Lankan detainees.
He said to see the young men crowding into the tent for Mass and hearing their stories of desperation as they waited for processing left him feeling sick and deeply pained.
"This is what my country, the best in the world I am told, does to people seeking what we all take for granted, a home, peace, security, food, family, water, a garden, a car, and being able to walk freely around," Fr Bissett said.
"I am not intending to write a political comment, but to register my pain at what our refugee solution, Pacific or otherwise, means in practice."


But wait a bit – aren’t the boat people banged up in these places all Muslims?
Apparently not – many of them are Christians, and many of those Christians are Catholics. To many of the Islamophobic Bogans out there, this should make a difference.
It doesn’t of course.
The situation also doesn’t seem to worry either Gillard or Abbott.
Perhaps Gillard has an excuse – she’s an Atheist.
Abbott, on the other hand calls himself a Catholic.
Posted by 1735099 at 10:39 0 comments