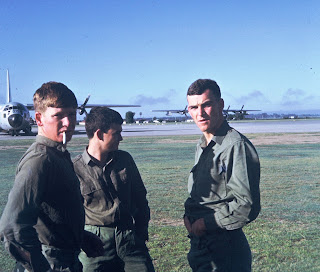 I'm taking a break from blogging until after Anzac Day.

For the next week or so, I will have better things to do as I'm travelling down to the biggest smoke to catch up on some old mates from my section (pictured above). I doubt they look like that now.

In the meantime, below is a poem posted as an Anzac Day tribute.

Up the red rooster!


Viet 1
I remember an Ektachrome daylight
In the Binh Ba rubber.
She sat, ochred feet resting.
That old, old woman who showed me
How to wear a headband.
She was unafraid of our scout
And his outlandish burst of Armalite;
It was more important to be comfortable.
She ignored us, our costly armour
(All mud-green high-tech camouflaged nonsense),
Smiled and smoked a grudged cigarette,
Turned away and thought on soldiers and children.
Her eyes were as wise as Lao Tzu
And she quietly waited for our departure.
04.07.70
Posted by 1735099 at 06:00 2 comments 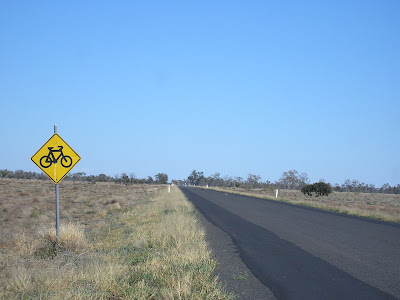 I'm prompted to post this after looking back over some of BOABs posts.

Some of the roadside signage appearing in his photos is bizarre, to say the least. I guess there are rich pickings when it comes to wierd signs in the urban environment where he rides.

There are big mobs of signs in Sydney, so by the law of averages some of them will be absurd. Which reminds me - does anyone know who's got the pub in Sydney now?

There's no excuse for the above example.

It's located on the Northern approach to Cunnamulla, about 20 kms out. I've been driving this road regularly since 2005, and I've seen (or at least I remember seeing) one cyclist in all that time on this road. He was slightly demented Japanese gentleman who was inspired by riding thousands of kilometers through the outback.

I think he was attracted by the contrast with his homeland. There's not much outback in Japan.

But there it is - sliently warning you to keep your eyes peeled for errant Mulga Bills.

Now if the sign had a picture of a black wallaby on it, I could understand its function. I've never hit a cyclist out there, but am averaging one roo or wallaby strike each year.

If you click on the image, you'll see a dead roo up the road a bit, and a road train in the distance. Both are slightly more of a problem than errant cyclists.
Posted by 1735099 at 08:51 2 comments 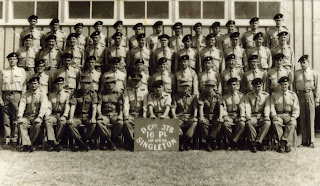 The recent controversy at ADFA has revealed some interesting perspectives held by some inside our military, and a bunch of diehard hangers-on.

We've listened to a range of opinions, which when stripped bare of bluster and posturing, highlight a world view which to me, is somewhere on the weird side of bizarre.

It's a view expounded by people (almost all male) who have spent most or all of their lives inside the military establishment, or working in support of it.
Put simply, it goes like this - Some serving members of the ADF see themselves as a separate caste. They believe that the membership of this caste puts them outside what is considered reasonable when it comes to matters of gender or race. They also seem to believe that nobody from outside the ADF has any right to make judgements of their conduct.

On a personal level, I first became aware of this worldview when called up in 1969. The behaviour of many of the NCOs at our recruit training battalion at Singleton could only be described as bizarre. If the carry-on of some of these instructors daily in plain view on the parade ground at 3RTB had been observed on a public street somewhere, men with strait jackets would have appeared in short order.

A few of these people were borderline psychopaths. A few were also as thick as two short planks, and there were one or two who were a combination of both.

There were also some excellent instructors, generally blokes who'd seen active service in Vietnam, and didn't need to make fools of themselves to establish respect. The quality of both the instruction and the instructors improved markedly once we progressed to Corps training.

Nevertheless, it was from time to time necessary to suspend rational judgment of some of these individuals and to understand that their world view was an aberration. The problem was that whilst as recent civvies, we could see this; many of them simply could not. I guess this explains the long periods without leave that apply early in recruit training. Contact with the real world during this critical conditioning process might burst the bubble.

It's apparent that there are plenty of individuals in the year 2011 who still inhabit this fantasy world - a world in which an entirely different standard of behaviour, especially as applied to issues of gender and race, apply.

Some examples of the mindset are revealed in comments such as "if I was in a trench next to a female I'd want to have sex with her" and "the guys would be perving on the women instead of concentrating on the task at hand". The implication being that a different set of standards apply that would make the phenomenon of men and women successfully working together as they do in Civvie Street impossible in the ADF.

Mining companies and oil exploration outfits seem to get by with mixed gender employees deployed in some rough and ready situations. Some schools of my experience are tough and elemental environments, but they don't seem routinely to descend into hotbeds of sexual depravity.

All of the above, together with my short but real exposure to the soldier's life, confirm two notions.

One is that our membership of our military should always be leavened with people who are essentially civilians when it comes to their life experience. This can be accomplished by a regenerated reserve, or some form of compulsory national service. An observation I heard repeated by many regular soldiers at the time was that the average I.Q. of the ADF went up several points with the advent of National Service. Nations with a successful and respected military such as Israel know how to make this work.

The other is that civilians make the best soldiers. I base this opinion on history. Arguably our greatest soldier, Monash, brought his civilian values to the war he fought, something that brought him into conflict with the British military establishment, who were members of an officer class who regarded their working class soldiers as expendable.

War, is after all, the ultimate absurdity. This does not however justify the belief that only those who take it seriously are capable of fighting. Civilians have in this country demonstrated a capacity to suspend rationality for a while to successfully participate in the collective madness of conflict when no other option exists. They've also been coerced or conscripted when there were other options - but that's another story......

Generations of Australians who stepped out of civilian life for short periods when they were needed (or thought they were) demonstrated that they made very good soldiers, whether they were Chockos or Nashos.

In the meantime, there are some in the defence establishment who need to be dragged, kicking and screaming, into the 21st century. The media's over-hyping the incident, and I'm not sure that Steven Smith has gone about it in the best fashion, but it needs to happen yesterday.

The caste system hangs on in some parts of India.

It's out of place here.