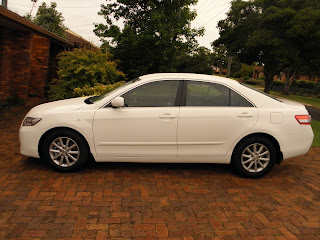 This week She Who Must be Obeyed (the fleet manager) set me up in a Toyota Camry.
Again, this car needed to get kilometres up in a hurry because it was brand new, and was due its first (1000km) service. My trip was about this length - a bit more as it turned out - so I picked it up just after it had been delivered with 30km on the clock.
Typical Toyota - it smelt funny, had all the ambiance of an Electrolux, and behaved exactly as the brochures described.
It also had Bluetooth, but after driving myself nuts, I gave up on trying to get it to work. I had better and less time-consuming things to do. As a rule of thumb I never read instruction manuals. They're for dropkicks who can't work stuff out by themselves - but in the end out of exasperation I was forced to. I've set up plenty of Bluetooth programs before (in Hyundais, Volkswagens and Fords) without hassles and without handbooks..
Using the handbook just made it worse, as the instructions read as if they'd been translated badly from Japanese into Russian, and then back into English.
What I finished up with was a kind of lottery. Sometimes the audio would pick up the phone part of the iPhone, sometimes the iPod part. It was entirely unpredictable as to which was operating at any given time, so I had to take the precaution of having my Blueant set up as a back-up. I tend to get lots of calls on the road.
Funny thing is, no matter what mode it was working in, it always muted the audio when a call came through.
Driving this thing reminded me of my son's 1996 Camry. Not much has changed.
It was as dull as grey porridge. The duco was actually white - hence the refrigerator reference.
Posted by 1735099 at 10:14 0 comments 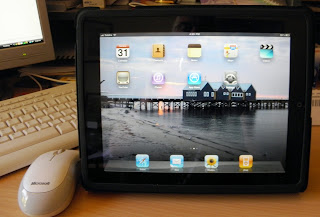 Finally I succumbed and bought an iPad.

I can rationaliise it by claiming that it will be a great help in making me more productive at work. I can make notes on the go in schools and classrooms, email them to myself, so that my reports are completed on the same day. This will make a real difference.
But secretly (you won't tell my bride, dear reader will you?) it should allow me to blog on the go.
The thing can be set up either to work off the Telstra 3G network, or to seek a Wi-Fi link, so I can get on-line at home using my Belkin server, or to find one of the many rapidly proliferating links in restaurants and coffee shops.

I've downloaded a neat (and free) application that finds the closest free Wi-Fi outlets as you move around, and highlights them on an on-screen map.
The only problem I have is that I haven't yet worked out how to upload media other than print.
I'm working on it.
Any suggestions?

Update - I have to buy another piece of kit which allows me to load pics directly from my camera on to the iPad.
Posted by 1735099 at 10:13 1 comments