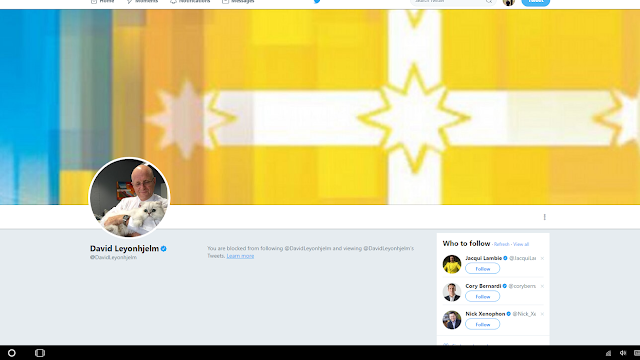 Old mate David Leyonhjelm (that's him with the cat) is a vocal critic of Australian gun laws.

So am I, by the way, but unlike the esteemed senator, I believe they're not restrictive enough.

You would assume, that if he's fair dinkum about his position, he'd be prepared to debate it in a public forum.

Not so. I've been blocked after a few robust exchanges after a recent US gun massacres (the one before the last).

Today I visited his Facebook feed and invited him to debate the issue on that forum - or any other of his choice. 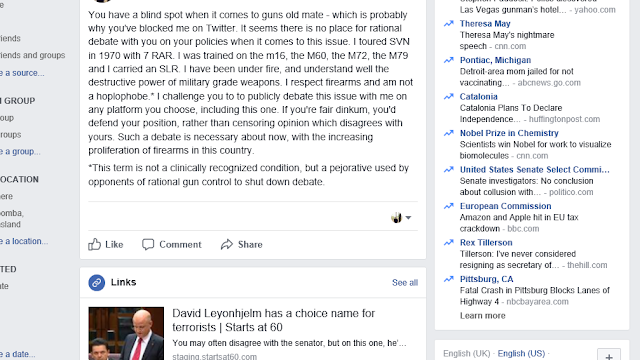 I won't hold my breath, gentle reader, but I will keep you posted....

Upgrade: The esteemed senator was not prepared to engage, but I discovered that there are a heap of conspiracy theorists out there who think he's God's gift to gun nuts. Why am I not surprised?

Ken Burns and Lynn Novick: The Vietnam War Is the Key to Understanding America

I'm posting this, gentle reader, because it is commentary on the documentary series produced by Ken Burns and Lynn Novick.

It comes recommended as an epic undertaking which reveals so much about the war which has waited 50 years to be revealed.

I'd be grateful, if you get to watch the series, if you let me know what you think of it. As I write, it's being streamed on American PBS, but not in Oz.

These people spent ten years on the project, and for a change, interviewed Vietnamese, from both North and South.
Posted by 1735099 at 15:32 0 comments One of the (few) benefits of having lived three score years and ten, is the chance to observe the way our wonderful English language has morphed over that time.


English is flexible, organic and versatile. The way it is used in political discourse demonstrates this.


“Illegal” is a good example for starters. It has been appropriated from across the Pacific and applied to what our government calls Unauthorised Maritime Arrivals (UMAs).


Before wee Johnny’s “Pacific Solution”, anyone using the term “illegals” would have been looked at quizzically, and asked “illegal/s what”? It was, after all, an adjective, not a noun.


Other nouns are converted to verbs. “Medal” is a good example.


Then we have “illegitimate”.


Back in the day, this word was used to describe a child born out of wedlock. I doubt that most Gen Xers would have any understanding of its use in that context.


Then there is “guy”. Again, it’s a trans Pacific import, but its meaning has morphed from the individual male to the non-gender specific collective. It’s now a word used to address a group of both genders. Strange….


Some words are relatively new. An example is “awesome”.


Apparently, it originates in California surf slang of the 1960s, where it meant more or less anything from "good" to "incredibly amazing". I don’t remember hearing it until the early 2000s, but I’m always a little behind the trend.


Occasionally, words are invented. If the person doing the inventing has a profile, the word usually enters the lexicon quickly. Pauline Hanson talks about “Straya”. I think she is referring to my native land, but I can’t be completely sure. After all, most of what Hanson says is her own unique form of patois, understood only by Harpics.*


Many words are so over used that have been worn out. An example is “icon”. An icon was, for eons, a devotional painting of Christ or another holy figure, typically executed on wood and used ceremonially in the Byzantine and other Eastern Churches.


It is now used repeatedly by all kinds of media to describe something as a representative symbol or as worthy of veneration. That’s OK. What irritates me is that it is over-used to the point of abuse of the original word and its meaning.


Then there is the language used in the political arena.


Generally, political language labels rather than describes. A favourite way of shutting down a discussion is to label your opponent. It’s used by those with a binary disposition who find analysis difficult.


That’s another trend imported from across the Pacific, as is the hyper partisanship that is wrapped up in it.


The study of language continues to fascinate me. I hope, gentle reader, you share my obsession.

*Those so far to the Right that they are completely round the bend. Derived from the slogan of a toilet cleaning product - "clean round the bend".
Posted by 1735099 at 12:49 3 comments