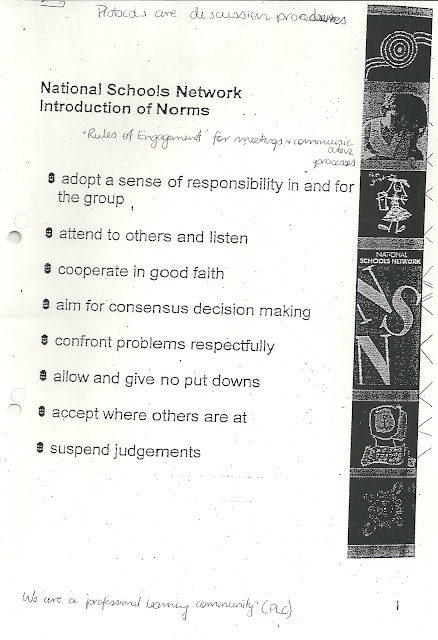 Whilst tidying up my study the other day, I came across notes of a staff development exercise I conducted at my school in the nineties in an attempt to improve cooperation and innovation.

They were great people, but most had been doing the same job for years (a common phenomenon in Toowoomba) and were a bit set in their ways.

Given the rate of change at the time, this had to change. How successful I was is difficult to judge in hindsight, but it was a useful exercise.

One of the tools we used was the Australian National Schools Network (ANSN) norms. These are essentially a set of principles to be used when working together to plan and solve problems.

It occurs to me that these same principles could be used in the blogosphere.

1. Adopt a sense of responsibility in and for the group
2. Attend to others and listen
3. Cooperate in good faith
4. Aim for consensus decision making
5. Confront problems respectfully
6. Allow and give no putdowns
7. Accept where others are at
8. Suspend judgements


Or perhaps in federal parliament? 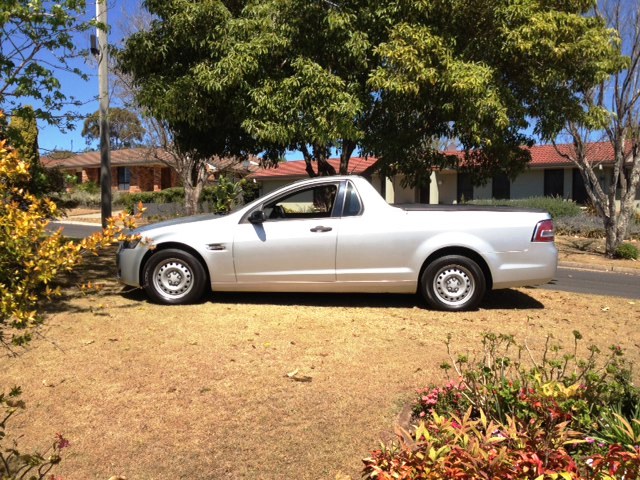 It’s been clear for some time now that I need a Ute.

The MX5 is a great little jigger, but when it comes to moving house, carrying cleared vegetation away, or disposing of years of accumulated household clutter, it’s not a lot of use.

This was brought home a few weeks ago when I drove to the local hardware store to get a few bits and pieces, and realised that most of said bits and pieces weren’t portable in the Mazda.

Offspring in shared student accommodation seem to move house at least annually, and I'm sick of hiring or borrowing Utes.

Having said that, anything I own has to be enjoyable to drive. I also prefer front engine, rear drive, and fully independent suspension. Once the decision was made to acquire a Ute, the next decision was which make.

Given my preferences above, it had to be a Commodore. I’ve owned Falcon sedans and driven Falcon Utes, and am familiar with the driving characteristics of the Henry*. They’re a great vehicle, but don’t drive as well as the Commodore.

The leaf spring rear end is also an anachronism these days. They’re OK when laden, but I’ll be driving the thing around empty most of the time.

The best value is had at auction, so that’s where I looked. I discovered a 2008 Omega with about 50000 on the clock, and ended up paying $3000 less for it than anything I’d found through a dealer or on private sale.

The Mazda is sulking in the shed. It’s a lovely little thing, but life moves on.

I’ll make sure it goes to a good home.