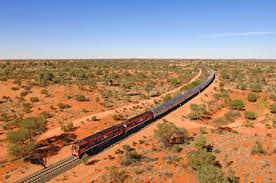 From 1st July (the day before the Federal Election) concession fares for Veteran Disability Pensioners and War Widows traveling on Commonwealth railways will be terminated.

As an old digger on the Duty First Facebook page posted -

That is a nice Election day present to those most affected by the wars and conflicts that the Coalition have sent us to.

These concessions have been available since WW2. There was  no consultation, rationale or apology.

There are many people with disabilities unable to use aircraft. I wonder whether their needs were considered?

Great Southern Rail is a big employer particularly in Adelaide, which has a high unemployment rate. No doubt there will be a drop off in travel on the two iconic trains, the Ghan and the Indian Pacific.

I was fortunate to travel both these trains in the last decade. There were many veterans of various wars on board. I remember thinking how fitting it was that they could travel across the vast country they fought for using a well-earned concession.

This decision is short sighted, unreasonable, and a slap in the face for the veteran community.
Posted by 1735099 at 13:20