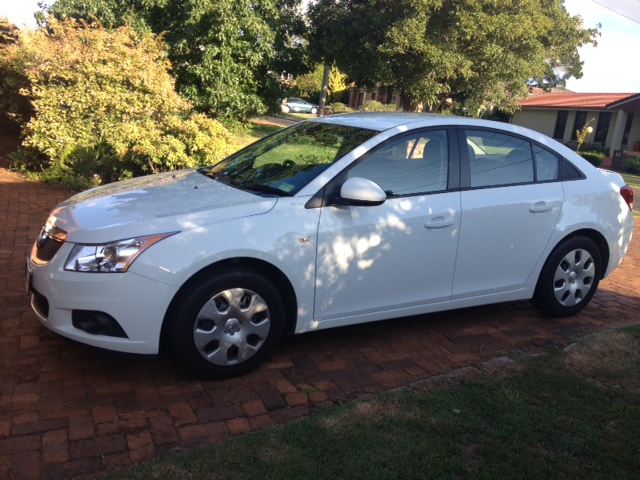 The school term's commenced, so I'm back at work again.

There was an urgent call to a school 200 kms west last week. This meant organising a car at short notice to head out, but I was stymied until Friday because the Warrego was cut at Charlie's Creek (Chinchilla).

She Who Must Be Obeyed (the Fleet Manager) allocated me a Holden Cruze, a vehicle I'd not driven before.

It was a poverty pack version (CD) is the Holden nomenclature, but still came with cruise control, a full suite of air bags and bluetooth. These are three features that I regard as essential given the way I use the vehicle.

It was a pleasant surprise. These things are extremely comfortable, quiet in the cruise, and easy to drive. There is a family resemblance to the Commodore, and the controls are configured the same way. The radio keeps playing after the ignition is off, and does so until you open a door. It retains the Korean characteristic of locking all the doors automatically after about thirty seconds.

I'm not sure I like that feature. Apparently it's a response to the South African market where hijacking is an issue. Hyundais have the same setup.

The six-speed auto doesn't team up too well with the Ecotec motor, and hunts around a bit on hills - not that there are too many hills on the Warrego.

I was about the third car allowed through on Friday morning, with the water lapping the bridge. It was about a foot lower on the way back.

I was able to put a useful day in at the school, with staff and parents seemingly more confident managing the many challenges this little lad presents.

I still prefer the small Fords (Focus and Fiesta) to the Cruze, but the Cruze is largely locally made these days.

Ford was going to build the Focus locally at one stage, but scrapped the idea. In hindsight, given the shape of the market, this was probably not a good decision.