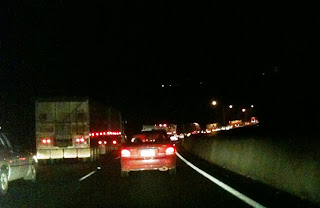 Congestion on the range.
I've begun to appreciate the knock-on effects of the mad weather since spending the last three days in .
It's only been the last three days that has been accessible from Toowoomba. Since last Tuesday, the Warrego has been closed. There were landslides on the range, flooding at the Western end at Withcott, and also halfway to Brisbane at Glenore Grove, and closer to at Goodna.
The final barrier was inundation around Rocklea. It went down on Saturday night.
Travelling to Brisbane on Sunday, the road was better than I had expected, as Main Roads has very sensibly used the period of closure to resurface long sections, particularly between Helidon and Withcott. The left lanes on this part of the road were in a dangerous state and plenty of people who were either careless or couldn't be bothered slowing down have learned the hard way about the weaknesses of stylish low profile tyres in combination with alloy wheels.
I've been talking to a few tyre repairers lately, but more of that later.
The alloys are strong, but you can't bash them back into shape in the same way you can steelies. Much of this section is repaired, but still has an 80 kph limit. You'd be stupid to drive any faster.
Large sections of countryside especially around Withcott and Helidon have been inundated, and whilst I know this road like the back of my hand, there were times I lost track of where I was because of how much of the landscape has been altered.
I was on the road to because I was helping my son and daughter shift house. The floods have put a meataxe through their plans. 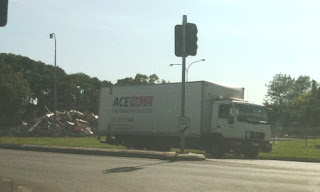 Flooded rubbish at Yeronga.
Together with two other students they had been leasing a place in Yeronga which they were due to vacate last week. The landlord wants to sell, so they couldn't renew, and my daughter has had enough of Yeronga anyway after she was assaulted on the way home from a night shift in March last year. She no longer felt safe there. My son had a casual job at a nearby supermarket which helped defray expenses as he studied. The supermarket was completely inundated,  won't be reopened possibly for months, and in the short term his job's gone.
Each had organised new accommodation - my daughter at Red Hill and my son at . Finding accommodation is a difficult process for students who don't own a car, are perpetually broke (despite part-time work) and actually getting all the paperwork together to apply for an accommodation lease is a complicated process.
Anyway, it all became irrelevant after 11th January, as the new accommodation disappeared - in each case - under brown muddy water. Their stuff was high and dry at Yeronga, despite flooding very close to them, and the worst that happened to them was loss of electricity when things got interesting on Tuesday night. They were more fortunate than many of their friends who now have no accommodation, no furniture, and not much money to get back on their feet.
Still, they were confronted with the problem of getting their gear stored until they could organise alternative accommodation. The flood put a bomb under the  rental market, so this search has suddenly become twice as difficult. Historically, students stay in share houses at the bottom end of the rental market. Generally, cheap properties, close to U of Q are low-lying.
So the available rental space has shrunk - like a pair of jeans, it's affected by water. And there are more people looking - many who have been flooded out.
I invoked the very effective family Mafia - being the eldest of six has some advantages - and borrowed brother-in-law's Ute. Number 2 sister offered to put daughter up temporally and son was offered a corner in a large and disorganised share house by friends. He's easy going and will live anywhere with internet access.
We got busy moving furniture and boxes to an industrial storage (carefully chosen on high ground) after initially having difficulty finding space not already booked - suddenly there are thousands of people in looking for temporary storage.
Unfortunately, to get to this storage at McGregor, we had to drive through all the devastation around Yeronga and Rocklea, and this added great chunks of time to the journey. It was impossible to plan a route avoiding it, as each time I drove between Yeronga and McGregor, the route changed. A muddy looking character in either Jungle Green or Police Blue would put his hand up and say - "You can't go through there, mate". A one-day shift turned into three days.
By yesterday evening the shifting was over, the unit cleaned, offspring in their new (temporary) accommodations, and I set out to drive back to Toowoomba.
Murphy intervened. It stormed. There were nasty fast-moving microbursts that uprooted trees, knocked out electricity supplies, and caused traffic chaos. The car (Ford Focus) was loaded to the gunwales with daughter's assorted paraphernalia, including 3 Ukuleles (she collects them), a large bag of rice with a hole in it, a very flimsy but attractive desk lamp, and many bags of clothes for St Vincent's in Toowoomba.
Included were also her gumboots (see image). She bought them at "Splendour in the Grass" this year when it got muddy.
There were also two laundry baskets filled with perishables and a very large beach umbrella, as well as a vacuum cleaner. It's amazing what you can get into a small car if you pack carefully. Caution needs to be exercised , as the pressure builds up and stuff erupts when you open the doors.
So it took an hour to get out of because of the storm, and the Ipswich Motorway was a parking lot.
This turned out to be a good thing, as when the front tyre went down; it wasn't destroyed because I was just crawling along.
I was also lucky to have the puncture in a section wide enough to stop safely. I needed lots of space, because all the gear in the boot had to be unloaded on to the side of the road. It must have looked like some lunatic was running a garage sale on the roadside. The other piece of good luck was that the rain had stopped.
So I changed the tyre, and put the dinky little get-you-home spare on the front offside wheel. This wheel looks like something off a wheelbarrow, and the car handled exactly like an old barrow with it on the front. The German designer who thought up this system obviously didn't have the , stormy weather and a car full of stuff in mind. The punctured tyre took up lots more space than the get-you-home spare and this added to my problems.
I made the decision to take the spooky tyre off the front (driving wheel in the Focus) and put it on the rear. On front drive cars  the rear wheels just go along for the ride if you get my drift. You can't get two wheels off the ground with the jack supplied in the Focus, so this meant three lots of jacking - work it out.
The rain had started up again, but I found a space in a covered parking space at a service station. Unfortunately, someone had, a few days previously, dumped a package of prawn heads about two metres upwind. This didn't improve my mood, although the odour blended well with the car which smelt of floodwater after three days in and around Yeronga. My daughter will be wondering why her gear pongs like off prawns. 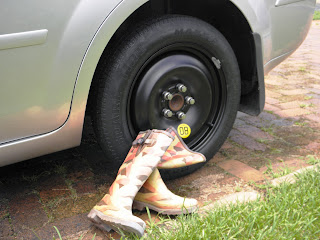 Gumboots and spooky wheel.
Much bad language and bleeding later (your skin gets brittle at my age) the job was done, and I was off at a steady 80 kph. The big sticker on the spare reminding me of this was looking a bit grotty by this time, but I was feeling relaxed and comfortable, because the car was driving a lot better.
Just outside of Withcott I saw a flashing sign saying "Severe congestion on range".
It was severe - see photo. It took another hour to get up the range, as the combination of a B Double breaking down and a landslide or two had complicated matters somewhat. The range crossing was a parking lot. Eventually things freed up and I meandered home.


So the one and a half hour journey had taken four hours. A glass of red and a 9.30pm dinner helped me contemplate the aftermath of the floods, and understand that whilst my family had been stuffed around somewhat, at least we still had beds to sleep in, cars to drive, and we were all safe.
There are twenty or so people in South East Queensland who have lost their lives, thousands who have lost their homes and businesses, and the knock-on effects will continue for years.
No doubt I'll see a different aspect of all this when I set out for Roma tomorrow. I have to drive through both Dalby and Chincilla, both recovering from record flooding.
Posted by 1735099 at 11:56