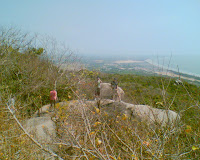 The second part of our trip to the places of significance took us back to the Long Hais and Vung Tau.

The Long Hais were important in that the Australians (specifically 8 RAR) took heavy casualties in that area and the majority of the veterans in our group were from that battalion.

We took the Hydrofoil from Saigon to Vung Tau. These vessels were gifts from the Russians (back in the eighties) and despite the fact that they’re beginning to succumb rather spectacularly to rust, continue to provide daily services. The Vietnamese maintain them in the time-honoured manner in that when some component breaks down; it isn’t replaced or repaired unless it is absolutely essential to maintain function.

There is no parts supply available for these things, so improvisation is the way to go They used to do this back in the sixties with their taxis, particularly the Renault 750s which were ubiquitous. They couldn’t care less about their appearance.

As we got off the hydrofoil in Vung Tau we were greeted by the locals with calls of “Uc Da Loi”.

I hadn’t been addressed like that since 1970. I wondered how they knew who we were, because we weren’t wearing anything to identify us. It probably had much to do with the fact that most visitors who came this way were Australians.

Vung Tau has been transformed, mainly as a consequence of the petrodollars being earned principally through the French company Total. The Vietnamese have been very canny in terms of how they handle foreign investment. They make sure that they get at least their pound of flesh, and perhaps more so. We could learn something from them in this country.

Along the beach front, which reminded me of so many seaside resorts in Queensland, there are zillions being spent on beautification. Part of this project involves laying kilometres of marble- faced walkway along what would be called the strand in Queensland. It drizzled rain on one morning that we were there, and this walkway became very slippery. I asked our guide about the risk of falls presented by the smooth (if attractive) surface.

He said – “No problem – we don’t have plaintive lawyers in Vietnam”.

Maybe there’s something else we could learn from the Viets.

We were heading off to the Long Hais on the second day, so first up I walked the few blocks from our hotel to the nearest Bank of Vietnam to cash some traveller’s cheques. There were long queues at the bank, and I had to queue twice – once to have the cheques verified, and again to actually get my Dong. The South Vietnamese abhor red tape, except in government run agencies (like the Bank of Vietnam), and it these places they rival the Indians.

I’d wasted so much time queuing that I was running late to get on the bus for the drive to the Long Hais, so I hailed a taxi. I showed my driver the card for the hotel, but he headed in precisely the wrong direction at high speed, which completely disoriented me. After a bit of yelling at him, he finally stopped, and a couple of things became clear.

This driver didn’t have a word of English – I had no idea where my hotel was, and my pidgin Vietnamese wasn’t up the task. This was a problem. Vung Tau is not good place in which to get lost (that much hasn’t changed in 40 years) and I was going to be very unpopular because the group was looking forward to getting away on time.

Suddenly the radio in the cab sprang to life, and part of what the female operator said was in English. I grabbed the microphone from the driver, pressed the transmit button, and asked “Can anyone speak English?” An old digger always relies on good comms in times of stress.

The same operator came on the air in dulcet tones saying “Can I help you”?

I carefully gave her the name and address of the hotel in English and she let forth with some rapid-fire Vietnamese at the driver who fairly soon delivered me to my hotel. He charged me half-fare, which was a nice gesture. I was given a hard time when I got on the bus – they’d been waiting about ten minutes. There were accusations that I’d been visiting a house of ill-repute up the road, which greatly amused my two sons.

The Long Hais are a coastal range rich in rock outcrops which would remind any Queenslander of Magnetic Island off Townsville. The area is very significant to anyone who served in an Infantry battalion, because in our time it was a stronghold of D445 battalion and there were many efforts to clean it out. The VC called it the "Minh Dam Secret Zone", and it had been a guerilla stronghold since the time of the war against the French. It was a very dangerous place. On 28th February, 8 Battalion took 9 KIA and 12 WIA in this area from mines dug up from the barrier minefield.

As close as we could get to the site of the incident, we remembered these blokes (many of them well-known to the vets I was travelling with) with a simple service, and the placement of some flowers. One of my sons read the service. There were a few tears.

We explored the area thoroughly and discovered much evidence of the conflict, including bullet marks in the rocks and evidence of B52 strikes which occurred from time to time. It was an excellent defensive position with great cover and extensive (and spectacular) views of the surrounding countryside.

There is a Buddhist monastery at the top of the feature, and we met the monks and drank tea with them. Right at the highest point is a big brass prayer bell (See pic). 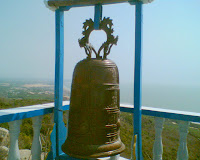 There was also a veteran of D445 laid on just for us. He demonstrated a strong tremor. Whether this was as a result of the Vodka that he was quaffing at regular intervals, or some other disorder, I’m not sure. His demeanor brought back childhood memories of an alcoholic First World War veteran I’d met in the small town in North Queensland where we’d lived for a while. The Vodka probably helped quell whatever demons his memories of the “American” war created.

The Vodka (which we’d taken with us on good advice) was the price of his reminiscences. 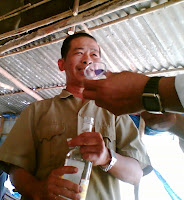 Conversations with ex-enemy are, to me, fascinating.

I always asked two questions – mostly through an interpreter, although there were a few who spoke some English. My questions were –

“How are you treated as ex-soldiers by your government?” and “What did you think of the Australians as soldiers?”

Sometimes the answers were surprising. This grizzled looking veteran at Long Hai disclosed that he was not able to support himself, and relied on charity, and gifts from friends and tourists to survive.

The answers to my second question were always that the Australians were seen as much more effective soldiers than the Americans. Allowing for the obvious human tendency to tell us what we wanted to hear, I believe that this was a generally held belief.

One response was very interesting. One nuggety-looking character I’d met earlier outside Ba Ria near the old tunnel complex said –

“You Australians were fighting on the wrong side. If you had been with us, we would have had the Americans out of here ten years earlier.”
Posted by 1735099 at 08:11