I love Saigon.
Having travelled through Asia and Europe, and visited over the years all the major centres in Great Britain and the Continent, I’ve not seen anything like the blend of excitement, atmosphere, and zest for life reflected in the streets of Saigon.

To start this reflection at the wrong end – I remember my last night in Saigon on my first trip back. My two sons were exhausted, so had taken to their room in the old section of the Grand Hotel where we were staying. I decided (at about 9pm) to go for a walk, so I’d have some strong impressions in my head when we boarded the plane for the flight home next morning.

I headed along Le Loi Street, and turned left into Pasteur Street towards the river. The usual street vendors were everywhere, and I lost myself in the sounds, sights and smells of the city. I had no intention of spending any money; rather I adopted a kind of window-shopping demeanour, much to the disappointment of the assembly of touts up and down the street.

After walking for ten minutes I began to notice something strange happening. Everywhere, and almost as if someone had given a signal, all the vendors began to pack up, and the touts disappeared. The process took only about five minutes, but soon there were no vendors and no touts. The place had undergone a rapid transformation.

Soon I understood the reason. Slowly along the street came an olive drab GAZ jeep, with two uniformed youngish blokes aboard. One was toting an AK47, and the other, the driver, had his in a rack by the side of his seat. They were wearing peaked caps, and my mind took a 40 year leap backwards remembering the “White Mice” I’d seen on the streets of Vung Tau when on R & C. I don’t know whether this new generation of gendarmes had the same modus operandi as those around in 1970. Back then, they blew a whistle (worn on a lanyard around the neck) once, and if you didn’t stop, they simply opened fire. Mind you – back then they used revolvers, not assault rifles. I also couldn’t see any whistles.

It took a minute or two for them to disappear from sight – they were driving very slowly, but once they had, the vendors and touts began to reappear. In about ten minutes, everything was back to normal.

This was a metaphor for modern Saigon. Despite the name change (Ho Chi Minh City), the dead hand of Marxism, and the appropriation of the administration of the city of five and a half million people by apparatchiks, largely from the North, the spirit of the populace has not been repressed. The entrepreneurial soul of old Saigon remains, and if anything, has risen like a phoenix, especially in the last ten years. This is a robust community. I love it.

A few days before this, I had the amazing experience of finding the room I occupied in the Cholon billet used by diggers providing what was called a Saigon Guard. To explain:
There was a large contingent of what we called “Saigon Warriors” during the Australian involvement. These blokes did all sorts of jobs around the Australian operation in Saigon and had all sorts of postings. 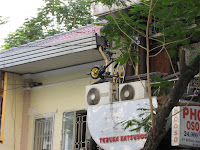 What they had in common, was that they were all POGOS (personnel on garrison operations) and weren’t trained in Infantry tactics. There was a need to maintain security in front of the Australian billets, and this was traditionally provided on rotation by diggers from Infantry battalions in Phuoc Tuy, some 50km to the South East. I guess this must have been a recognition of the familiarity of the Infantry with the weapon used – the M60 belt-fed machine gun. It was a rare opportunity for us to spend time in Saigon, even if it was only for a week. What was really galling was that the Saigon warriors got a considerable allowance for the privilege of sleeping in beds behind walls.

Anyhow, in November of my tour, I was lucky enough to score a Saigon guard. I had a ball, because we worked day on – day off, and made the most of the Saigon nightlife that was mind-blowing back then, at the peak of the US involvement. Unfortunately, the duty lasted about ten days only, and we returned to our respective companies when it was over.

We stayed in a three storied billet, called I think, the “Canberra”. I have no idea why it was called this – to make the diggers feel at home, perhaps. It was certainly very different from your average Hotel Canberra, featuring bedbugs and dodgy French plumbing. I remembered that the room I stayed in had a Kangaroo stencilled on the door.

I felt the need to try to revisit this place, out of nostalgia, I guess, but I was also curious to see what had become of it in the last 40 years. I told our Sino-Vietnamese guide. This bloke is a font of knowledge on the history of the Australian involvement, and in one day flat, he turned up with a blurry photo, and showed it to me.

It certainly looked familiar, but had four floors. I remembered three.

To remove all doubt, my sons and I took a cab to the address provided. It was indeed the billet, and it had grown a floor. I found the room I stayed in, and the stencilled macropod. It looked and smelled much the same as it had 40 years ago. 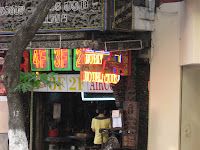 We met the manager, a Chinese guy, who spoke English well. He was quite chuffed to hear my story, and provided a bit of history.

When I stayed in the hotel back in 1970, the building was owned and managed by his Grandmother. Saigon fell in 1975, the new administration requisitioned the hotel, and she was booted out, being left only with a receipt. The family fell on hard times for a while, and eventually the Grandmother died, and the documentation about the hotel was passed to her son.

With the advent of “Doi Moi” came in during the late eighties, the son wrote to the authorities, and after a bit of negotiation (and no doubt a bribe or two) the ownership of the hotel was passed back to the family.

It was run-down, so they refurbished it, and added another storey. It now provides budget accommodation in Cholon for people visiting Saigon from the provinces. The son became ill, and the management duties had been passed on to the grandson, the bloke I was talking to.

Again – an allegory for Saigon.

I have one word to describe that family of hoteliers - tenacity.

It's funny that to the platoons in the front line, CHQ is pogo-land. For those in CHQ, those back at battalion are pogos. Those pogos in Saigon probably thought that anyone serving back in Aus was a pogo.

Yes - it's all in the eye of the beholder.