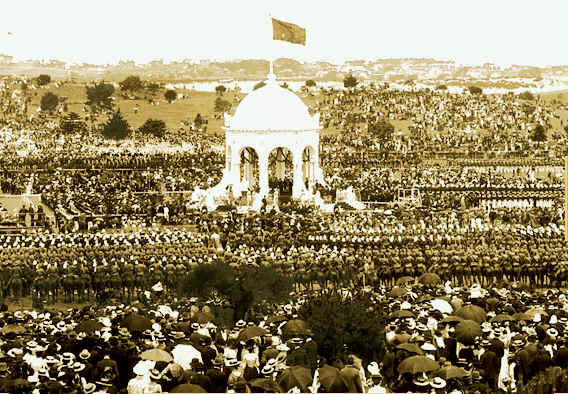 Last Tuesday was a public holiday.

It’s a public holiday because two hundred and thirty three years ago, a convict settlement was established at Botany Bay by the British.

When you think about it, being granted a public holiday seems a strange way of remembering the opening of a penal settlement. If it was, say, a school, or a hospital, perhaps that would be grounds for celebration. But a jail?

We should commemorate a national day. It gives us an opportunity to reflect on what being Australian actually means, and to understand our history, and what makes this country the best place to live if you value a great quality of life.

But if you understand our history, it's difficult to rationalise the choice of January 26th as our national day.

The significance of the 26th January lies in the fact that this was the day when Phillip, after a reconnaissance on 21st January to find a more favourable spot than Botany Bay for a settlement, planted the Union Jack at Port Jackson.

If you had asked the redoutable Arthur Phillip what exactly he was doing, I doubt very much that "establishing a nation" would have entered the conversation. He was carrying out his orders, dutifully setting up a penal settlement, because the loss of the American colonies had shut off earlier options for detaining prisoners.

A new location had to be found, and Port Jackson was suitable. Let's not kid ourselves. This was nothing to do with nation-building. It was an exercise in developing a jail.

The first time the term "Australia" was used on anything official was by Matthew Flinders in a chart he compiled in 1804 whilst imprisoned by the French in Mauritius. It wasn't until 1824 (36 years after the arrival of the first fleet), that the British Admiralty finally accepted that the continent should be known officially as Australia.

So calling 26th January "Australia Day" because of the significance of the date is an ahistorical misunderstanding.

That really is quite straightforward.

That date of Federation (1st January) is an obvious choice.

The move toward Federation was a long time in the development, marking, as it did, the growth of a sense of national identity felt by native born Australians.

The Tenterfield Oration, given by Sir Henry Parkes on 24 October 1889, is generally recognized as the beginning of the Federation process.

The argument against 1st January as unsuitable because it is already a public holiday is a distraction. If having a day off is so important, the holiday could be taken at some other time. Beyond that, almost everybody is already celebrating the New Year on that day, so adding a national commemoration won't spoil anything.

As for the "Invasion day" controversy - perhaps moving the emphasis from dispossession (as signified by remembering the planting of the Union Jack), to celebrating the creation of a new federated nation might take some of the heat out of that.

The flag planted on 26th January 1788 was not, after all, the Australian flag.

It is the flag of another nation entirely, a nation that had rejected and imprisoned the majority of those who witnessed its unfurling back then.

"Electing not to vote is actually "having a say".
You read it here first.

This is accurate. If you do not place a vote you are accepting the outcome and have thereby taken part. It is similar to being part of a criminal group where one member although present takes no active part in a serious crime committed by the others, but allows it to occur without attempting to prevent it. The law says that all persons present besides the victim have been active in the crime committed.

"Mind you, the same option is available in Australia.
All you have to do is go to the booth, get your name marked on the electoral roll, and walk away with a ballot paper. You can put it in the box without marking it."
That is a choice in creating the outcome of the election. Donkey votes are counted but not attributed to candidates. They are part of the system that elects our donkeys to Government. If you were to vote informal and it came down to that really fine line those non-votes may well decide the outcome. As happened with the homosexual marriage poll.

If you do not place a vote you are accepting the outcome and have thereby taken part.

So not taking part is actually taking part.
Logic 101!
If you were to vote informal and it came down to that really fine line those non-votes may well decide the outcome.
Nope.
Informal votes are not counted.
They make no difference to the outcome.
That's why they're called "informal".

Thanks 1735099
There is a lot more to our history than what is taught (or not taught) in our schools.
Maree

"It’s a public holiday because two hundred and thirty three years ago, a convict settlement was established at Botany Bay by the British."

What a simplistic, incomplete, and ignorant comment by the blogger.
It is a public holiday because it commemorates the raising of the British flag at Sydney Cove by Arthur Phillip. This brought British Law, European concepts of land ownership and the political and social structures that would form the institutions and culture of modern Australia.
NSW was not just a penal settlement, and its first official day at Camp Cove is an excellent date to celebrate all that Australia has become.
John Grey

If informal votes are not counted, 9905371, why are they given a mention at AEC with a full break down?
https://results.aec.gov.au/24310/Website/HouseInformalByState-24310.htm

"They make no difference to the outcome."
Perhaps I should have been clearer....had those votes been used by the voter and therefore allocated to a candidate in a tight contest the result may have been different. Therefore by choosing not to allocate a vote the voter has affected the election result.

You are right 1735099, there is a lot more to our history than what our children are being taught. Indoctrination is not education when history is intentionally changed or omitted from the curriculum.

Indoctrination is not education when history is intentionally changed or omitted from the curriculum.

That piece of indoctrination had been on material used in the Australian curriculum about the war in Vietnam for decades. It was gratifying to assist in removing it.

The calls to "change the date" are few in number and only get traction in January. Even the blogger finds it necessary to link his arguments to this point in the calendar because no-one is interested for the rest of the year.
The anti-Australia Day meme has minimal support and can't make itself heard during any other month.
John Grey

I commented on a reply by Maree, but directed it to a number. 1735099 replied indicating that 1735099 is also Maree a name which is a favourite in the Bloggers family heritage.

Australia Day is about celebrating the First Fleet's arrival in 1788 and recognising the early convicts and settlers, and the fact that our language, political and legal institutions are inherited from the British Isles. (Kevin Donnelly)

Of course the blogger wants all that history consigned to the rubbish bin.
John Grey.

Of course the blogger wants all that history consigned to the rubbish bin.
Now where did I write that?
How does changing the date so that it commemorates the federation of Australia consign our history to the rubbish bin?

"The first time the term "Australia" was used on anything official was by Matthew Flinders in a chart he compiled in 1804"
How wrong can one blogger be.
Even his favourite lefty reference site Wikipedia mentions several official uses of the Latin "Australis", and from 1625 more official use of the English word Australia.
Flinders only popularised the word.
Perhaps a little more analysis is required before the blogger puts finger to keyboard.
Elementary mistakes like this makes the reader doubt all "facts" expressed by the blogger.
John Grey.

"Now where did I write that?"
Obviously, it's everywhere in your post where you claim the original settlement in Sydney Cove was only a convict jail.

"It’s a public holiday because two hundred and thirty three years ago, a convict settlement was established at Botany Bay by the British."

Perhaps a little more analysis is required before the blogger puts finger to keyboard.
You're the one requiring analysis.
By a properly qualified psychiatrist.