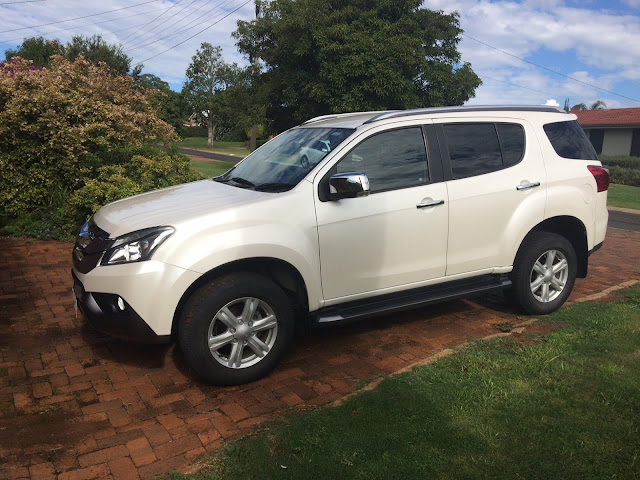 This week I had the opportunity to cover 1000km in a lumpy truck.

It was an Isuzu MU-X (where do they get these model names?) and I finished up with it because the hire company had run out of Outlanders. It was, apparently, an “upgrade”.

This is the second time this has happened. The last time I was upgraded to a Toyota Prado, so comparisons were possible.

The Prado comes across as slightly up-market, especially comparing the interiors, but there’s not much in it. The MU-X is, for mine, a more useable vehicle. It is comfortable, very easy to drive, and feels every bit as strong as the Prado is reputed to be.

And best of all, it doesn’t smell like a Toyota. It must be the glues they use, but you could blindfold me and I would be able to pick a Toyota immediately by its distinctive pong.

The best feature of the MU-X is its motor. It feels unburstable, but at the same time, discrete and in the background. There is a slight diesel clatter, but noticeable only when cold. It’s the kind of diesel that you can start up at 5am in the motel forecourt without stirring the somnambulists. 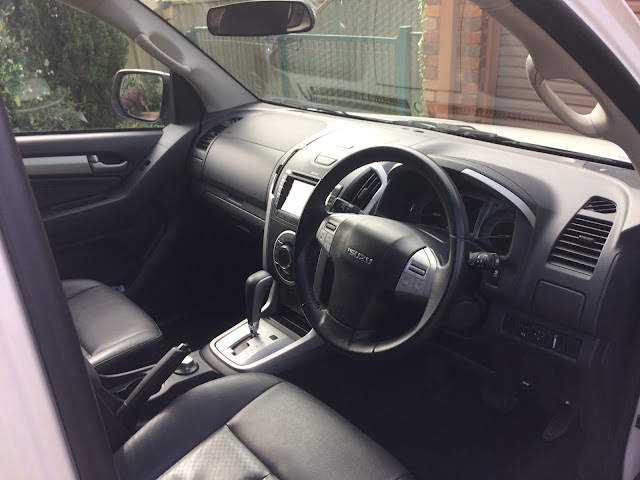 Like the motor, the transmission (in this case a 6-speed auto) is also discrete, but it kicks down with alacrity when booted. It overtakes well.

It handles as you would expect – the separate chassis and off-road engineering creates a lolloping gait, but the steering is communicative and stability is fine. At no time, did I feel insecure at speed, something that was occasionally an issue in the Prado.

Whilst the interior is a sea of hard dark plastic, it is laid out logically, has plenty of storage, and looks easy to clean. The AC and sound systems were simple to use and the Bluetooth straightforward. The only negative aspect I encountered was the AC. It took a long time (minutes) to get the interior comfortable after parking in full sun. Maybe I wasn’t setting it up properly.

Probably the most sales worthy feature of these Isuzus is their value for money. They come in at over $7000 less than the comparable Prado, and are available with 4X2, for about ten grand less and Isuzu always seem to be prepared to offer deals. The 4X2 is rapidly becoming the weapon of choice for grey nomads towing tandem axle vans.

They also have a strong reputation for reliability, if you read the forums. They seem to be matching Toyota in this respect.

The fuel consumption readout had me confused for a while until I realised it was set up for kms/litre.
Who uses that?

After a little bit of maths, it became apparent that the thing was turning 8lit/100kms on a mixture of commuting and cruising. A fill-to-fill calculation across a 350km open road trip turned 7lit/100kms - not shabby.

In summary, these things are user friendly, non-nonsense, and good value for money. The one I drove was a genuine seven seater, with a DVD player folding down from the ceiling to keep the sprogs entertained.

If you were contemplating a trip across the Nullarbor, or from Brisbane to Mt Isa, with a family of small children, this would be the weapon of choice.