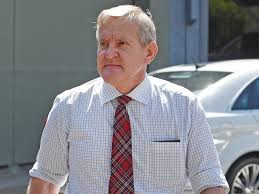 Our local federal member, Ian Macfarlane, has announced his retirement from politics.

I’ve had a fairly long and interesting relationship with this bloke. The first time I met him was when he came to my school to present us with a new flag. He managed this with ease and grace. Not every politician is comfortable in the company of people with disabilities. Chainsaw was.

The next time was in 2003, when he was handing out commemoration of national service medals in Toowoomba. I believed at the time (and still do) that the timing of these presentations and Australia’s commitment to the Coalition of the Willing in Iraq was more than coincidental. In hindsight, that commitment was a mistake, as was the whole Iraq debacle, but there you go. I reckon that the medal presentations were part of gingering up the electorate to support our intervention, and resented being used again (as I had been in 1970) as political fodder. Consequently, my public refusal of the medal made the front page of the local rag, with a photo, and chainsaw was the unwitting victim of my small protest.

I always felt a little uneasy about this, so when I was ready to publish “Jellybeans in the Jungle” and was looking for someone to write an introduction, I asked him for a meeting. He agreed both to the meeting and the introduction, which was generous behaviour given what had preceded it. He was an honoured guest at the launch.

Since then, he has been shafted twice by his party, but each time, took it in good grace, and doesn’t appeared to have harboured any grudges. He is indeed, a rare bird in national politics, in that he has always been fair dinkum in his quest for good and honest government, and though I have never voted for him (he’s in the wrong party), I respect his integrity and common sense.

Like Guy Fawkes, Chainsaw was one of the few who has entered parliament with honest intentions. Unfortunately, not many contemporary representatives seem capable of mature and respectful behaviour, and if the trend continues, our political life will eventually begin to resemble the circus that we see across the Pacific.